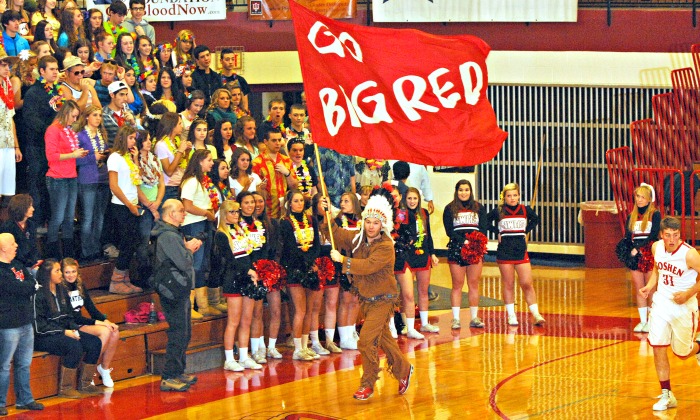 Photo: The Goshen (Ind.) High School Redskins mascot races around the floor with large “Go Big Red” flag after leading the team on to the floor just before tip-off against NorthWood Friday, Jan. 24, 2014. Truth Photo By Jennifer Shephard.

Editor’s note:​ Goshen, Ind., is home to many members of Mennonite Church USA, as well as where Goshen (Ind.) College is located. Preheim’s call for Goshen High School to change its athletic teams’ name relates to one of the Mennonite Church USA’s seven priorities—undoing racism and advancing intercultural transformation.​

Broadcasters, sportswriters and even entire newspapers refuse to use it.

Christians, Jews, Muslims and Buddhists oppose it, as does half the U.S. Senate. A host of athletes, actors and other notables are also against it. The U.S. Patent Office revoked its trademark registration. Now the Federal Communication Commission is considering banning its use.

So why are Goshen (Ind.) High School’s athletic teams still called the Redskins?

The overriding answer is community insensitivity—people either don’t know or don’t care that the nickname is offensive.

Of course, most attention is on the high-profile NFL team in Washington, but the criticisms are just as valid in Elkhart County as in the District of Columbia.

Tim Giago is an Oglala Lakota and award-winning journalist who for 30 years has been advocating for the elimination of Native American nicknames for athletic teams. He says most Native Americans oppose Redskins.

“It is a derogatory name for a race of people. It’s as simple as that,” he wrote in one of his many pieces on the issue. “It is not … an honor to be called a racist name, nor is it an honor to see football fans dressed in supposed Indiana attire not to hear them trumpeting some ludicrous Hollywood war chant, or to see them mimic or ape our dress, culture or person.”

We may be inclined to dismiss the FCC or Howard Stern. (Who would have ever thought that the notorious radio personality and the federal agency that has bedeviled him might actually be on the same side?)

That’s understandable, since government dictums and celebrity causes don’t necessarily carry a lot of weight with the public.

But we must pay attention to Giago and more than 100 tribes and other Native American organizations who find the name degrading, no matter the good intentions claimed by Goshen High School or Washington owner Dan Snyder.

They might think they’re raining down respect on Native Americans, but for many on the receiving end, it’s nothing but spit in their faces.

According to a 2004 report by Stanford researcher Stephanie Fryberger, the use of “Indian” mascots negatively affects Native American self-identity.

A big reason is most depictions of Native Americans in popular culture, including sports, are of rampaging, war-whooping savages in face paint and feather headdresses wielding tomahawks. They are stereotypes stuck in time.

By contrast, the entire white race isn’t pigeon-holed like that but can be Boilermakers, Eddies, Minutemen, Vikings and much more.

Redskins supporters will correctly point out that dozens of other U.S. high schools also use the nickname, but the name is just as offensive in most of those instances too.

The only possible exceptions are a couple of high schools that are mostly Native American.

If that’s what they want to call themselves, it’s their prerogative. It’s akin to the rule that it’s bad taste to tell a joke about any group unless you’re part of it.

That’s part of the problem at Goshen (and Washington). Redskins was applied and used by a historically white community.

The school district is certainly increasingly diverse, but with Latinos, not Potawatomi.

They and the other local tribes had been removed from the area by 1840, nearly 90 years before Goshen High School basketball players became the first Redskins.

The school could ask the descendants of those earlier indigenous residents if they approve of the name.

That’s what the Central Michigan Chippewas and Florida State Seminoles did. Each university sought and received support for its mascot from the tribe of that name.

But Goshen shouldn’t get its hopes up.

There are other reasons advocates will cite for keeping the label, such as, “What about other nicknames?” The answer is that most others are not offensive.

For example, there is no outcry from people descended from the Emerald Isle that Notre Dame is denigrating them by calling its teams the Fighting Irish. The school, in fact, has a rich Irish Catholic heritage, which explains the name.

Unlike Native Americans, cavemen can’t really be stereotyped—they’re already caricatures. And because it’s been eons since they walked the earth, they can’t be offended by the nickname.

Another excuse is that not all Native Americans are behind the anti-Redskins campaign. Which is true.

Some are more concerned about the poverty, substance abuse and hopelessness pervasive in their communities. Some are actually comfortable with the name.

But there is too much evidence that too many Native Americans are offended by Redskins for Goshen High School to justify continuing to dismiss them.

Rich Preheim is a member of Hively Avenue Mennonite Church in Elkhart. This piece and the photo originally ran on the Elkhart Truth website here.