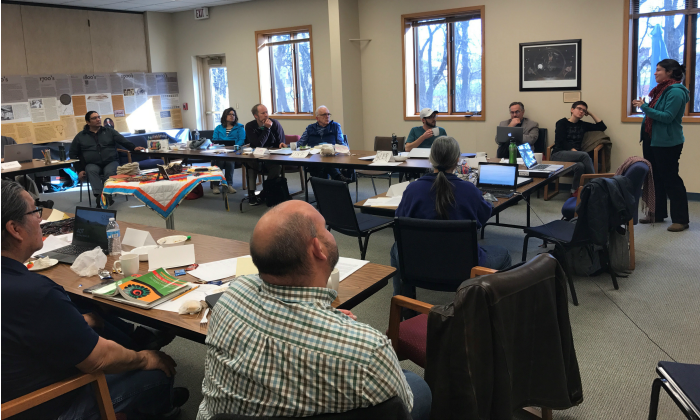 A group calling itself the Dismantling Doctrine of Discovery Coalition (DDoDC) considered ways to expand its work at its annual meeting Jan. 26-28 in North Newton, Kan. The meeting included 21 coalition participants from across the United States.

The coalition formed in August 2014 as an ad hoc working group of Mennonite church and lay leaders seeking to share varied resources in the work of dismantling the Doctrine of Discovery. That doctrine is a philosophical and legal framework dating back to the 15th century that gave Christian governments moral and legal rights to invade and seize indigenous lands and dominate indigenous peoples.

The group next met in January 2016. In this third meeting, coalition members looked at its structure and at how best to find financial resources to continue its multifaceted work.

The DDoDC’s work is carried out through working committees that focus on fundraising and communications, arts, structures, education and constituency relations. Part of the meeting involved each of these committees meeting and developing priorities for the next year.

The group is a coalition and is not organized as a nonprofit. Therefore, it must affiliate with a nonprofit in order to receive tax-deductible donations. In the past, Everence has provided that necessary affiliation through the Creation Care Network, whose director, Luke Gascho, is a member of the coalition. However, through this setup, the group was unable to obtain the names of those who made donations. The steering committee brought a proposal that Pacific Southwest Mennonite Conference (PSMC) fill that role moving forward.

David Gray, mission minister with PSMC, directs the Anabaptist Resource Center. At the meeting, he said he hopes PSMC can carry some of the fiscal details so that DDoDC is freed up to do its work.

But the language of being a “mission” or “ministry” of PSMC brought objections.

Erica Littlewolf, administrator of the Indigenous Visioning Circle for Mennonite Central Committee Central States, said there is an implied ownership by PSMC that makes her uncomfortable. “When money’s involved, it gets tricky.”

Amstutz acknowledged that the coalition needed to restructure its financial relationship, but “how do we have more integrity and transparency with our money?” she said.

Gray said the language could be changed and, in the end, they agreed to use “partnership.”

Throughout the meeting, people worked to address the tension of how to organize in a way that doesn’t imply domination by one group over another. Harley Eagle, one of MCC Canada’s Indigenous Work Coordinators, described the Doctrine of Discovery as “a symptom of a way of thinking.” While it’s normal to figure out the money question first, he said, “there are indigenous ways that carry much wisdom.”

Another tension and element of the coalition’s work is the fallout from centuries of oppression of indigenous peoples by the Christian church (Catholic and Protestant, including Mennonite). Sarah Augustine, professor and co-director of the Suriname Indigenous Health Fund, said she talks with people of the Yakama nation in Washington, but doesn’t know of any Christians among them. “They are reluctant to be part of a Christian group,” she said.

Other coalition members expressed openness to people who aren’t Christian and who may even be anti-Christian. However, said Augustine, many of the people she trusts to be good decision-makers are not able to go to a three-day meeting somewhere else.

One such ad hoc effort came last year in the form of a play written by Alison Brookins during a 2016 internship with Ted & Company Theaterworks. Brookins, currently a student at Anabaptist Mennonite Biblical Seminary, Elkhart, Indiana, introduced “Discovery: A Comic Lament,” which she called “a play about love, and loss, of land.”

A written description of the play says that it uses humor and connects to Mennonite narratives, inviting audiences to “face the [Doctrine of Discovery] honestly and enter into lament, and from there to hear the voices of indigenous peoples offering us ways to work together.”

During the meetings, she and Ted Swartz, who founded Ted & Company, performed a read-through of the play and asked for feedback. Other members of the coalition offered critique and affirmation.

Brookins and Swartz indicated that changes can still be made, and Eagle said he celebrated that white settlers were presenting this play.

In the end, the group decided to partner and support the play. Swartz said the presentations will likely be two hours—one for the play and one for discussion afterward. Ted & Company is proposing a two-week tour between June 28 and July 14 and will travel to wherever they can secure shows. Churches in Illinois, Indiana, Minnesota, North Carolina, Winnipeg, Manitoba, and Wisconsin have already expressed interest.

Many coalition members participated in the protest near the Standing Rock Sioux Reservation in North Dakota in the past year. Richard Iron Cloud, of Porcupine, South Dakota, said he first went there last April, when there were only two people there. Many more would join the protest later in the fall.

People talked about their experiences there. Littlewolf said she felt safe there and wished she could be in that kind of safe place all the time, “like it was hundreds of years ago.”

Several talked about the prayerfulness there and the unconditional love they felt. Augustine asked, “Do we need to make plans about going back?”

On January 24, President Donald Trump issued Executive Orders that sought to advance construction of the Dakota Access and Keystone Pipelines, whose construction had previously been halted by former President Barack Obama.

Further discussion emphasized that there are other camps, inspired by Standing Rock, that are in the path of pipelines and that a lot of the energy from Standing Rock is going to support those efforts.

For more information about the coalition, go to www.dofdmenno.org.