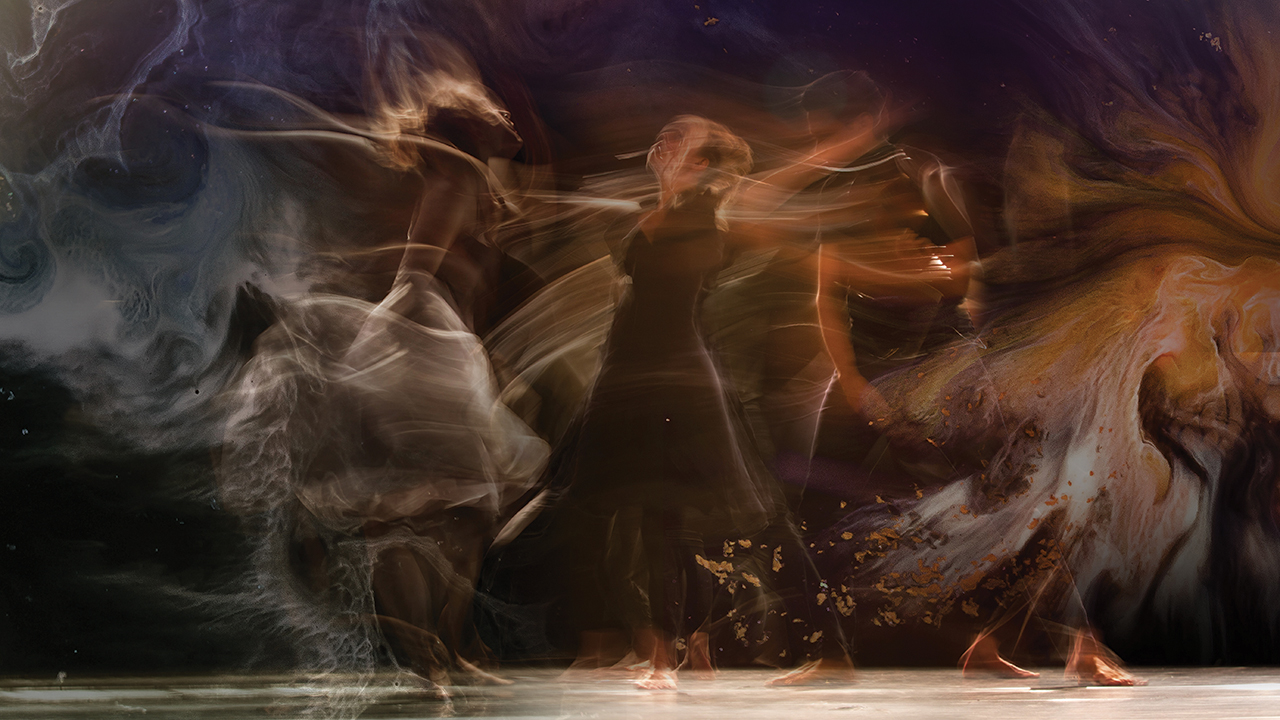 Photo collage by Hannah Gerig Meyer with photos by Ahmad Odeh and Joel Filipe on unsplash.

In 2008 I went on a Mennonite Central Committee learning tour to Iran with about 15 other North American Mennonites. We had many rich discussions with Shia Muslims about differences and similarities between Islam and Christianity.

One evening when we Mennonites were alone, the subject of the Trinity came up. This Christian doctrine says God is a single being who exists in three forms: Father, Son and Holy Spirit (or Creator, Redeemer and Sustainer). Muslims reject this idea, finding it incompatible with a belief in one God.

Since the Trinity was a stumbling block in our Muslim-Christian dialogue, some in our Mennonite group were ready to jettison this doctrine to accommodate interfaith relationships. I was not one of them.

I wish I could say I mounted a compelling defense of the Trinity. Instead, I remained glumly silent. This article, after all these years, is my belated response.

Mennonites are probably most confessional when we sing. Seventeen hymns in the 1992 Hymnal: A Worship Book are classified as trinitarian. Twenty-four trinitarian hymns are listed in the index of the new Voices ­Together. The popular Mennonite hymn “Praise God from Whom” (so-called “606”) is trinitarian: “Praise Father, Son and Holy Ghost.”

Trinity is not about…

Numbers: There is no way to add one plus one plus one and come up with one. The trickier “one times one times one equals one” is too clever by half. To think about the Trinity is to reflect on the nature and depth and complexity of God’s revelation. It is not a way of trying to square a circle. Analogies like “water, vapor and ice are all H2O” can be helpful if not taken too literally.

Gender: With legitimate reasons, the exclusive language used for the Trinity, especially the Father-Son dyad, has been critiqued. Feminist theologian Janet Martin Soskice helpfully suggests “the principal reason why the biblical writings are so dependent on gendered language (a dependence that increases as we move from the Old Testament to the New) is not because its writers were so very interested in sex, or even hierarchy and subordination, but because they were interested in kinship.” Father-Son-Spirit language should sometimes be leavened with other less gendered language for the Trinity, such as Creator-Redeemer-Reconciler/Sustainer.

The word “Trinity” never appears in the Bible. Yet, Scripture contains trinitarian passages: In his Great Commission, Jesus said, “Go therefore and make disciples of all nations, baptizing them in the name of the Father and of the Son and of the Holy Spirit, and teaching them to obey everything that I have commanded you” (Matthew 28:19-20a). Numerous other examples of a trinitarian formula could be cited.

Long before the development of trinitarian doctrine, the early Christians realized they couldn’t talk about God without talking about Jesus Christ, and they couldn’t talk about Jesus without reference to God. Through the life, death and resurrection of Jesus, they believed God truly had been present with them in the person of Jesus. After Pentecost, they believed the same Spirit who was present with Jesus — none other than the Spirit of God — was now present with the church.

A narrative underlies the Trinity: a story about God creating the world and forming a people; about sin entering human experience; about Jesus the Christ coming to liberate us from sin and the powers of this world; and about the Spirit being breathed into the church to become a light to the world.

The Trinity is not likely to come up in everyday conversations about discipleship. And yet it is a necessary concept to ensure that we think and speak accurately about who God is.

Theology is the grammar of our faith, and the doctrine of Trinity is part of that grammar.

To keep a trinitarian faith alive, we must engage in some practices that reinforce this basic conviction. Here are some suggestions:

— Preach Trinity sermons on Trinity Sunday, May 30 this year. They should be testimonies to the God who is above us (God the Father), the God who is for us (Jesus Christ), and the God who is with us (Holy Spirit) not expositions on arcane dogma.

— Preach or teach more on the first and third members of the Trinity, on God as Divine Parent and God as indwelling, regenerative Spirit.

— Keep singing trinitarian hymns, such as “Come, Thou Almighty King,” “Holy God, We Praise Thy Name” and “O Worship the Lord.” Once in a while, congregations may need to be reminded that a song is, in fact, trinitarian — including “Praise God from Whom.”

— Occasionally pray in the name of the Trinity, rather than always ending with “in Jesus’ name.”

— Include some teaching on the Trinity in catechetical and new- member classes. The first three articles of the Confession of Faith in a Mennonite Perspective are a useful resource.

— Include the short doxology in every worship service, perhaps as a response to the offering. Inclusive language could be used: “Praise God from whom all blessings flow; in heav’n above and earth below; One God, three persons we adore; to God be praise for evermore. Amen.”

We rarely think about grammar when we talk, but we have to know grammar in order to communicate clearly. Trinitarian theology assures that we talk about God in ways that are consistent with the biblical story as Christians have interpreted it.

The embodiment of God

Some Mennonites — usually more highly educated, progressive ones — are comfortable with going against the grammar of Christian faith by thinking about Jesus as a prophet and great teacher without ascribing divinity to him. Without a divine Son of God, there is no need for a trinitarian doctrine.

Much is lost if we give up convictions about a trinitarian God. Incarnation is at the core of the Christian faith. It is the belief that God didn’t just create the world and then leave it to its own devices. God continued to engage the world through calling out a covenant people. God’s Spirit addressed those people continually through prophets, from Moses to Malachi. But God came fully in the person of Jesus.

If Jesus is who we say he is, the very embodiment of God, then that enhances the life, teachings and ministry of Jesus. It is wrong to conclude that trinitarian thinking is a distraction from discipleship, from following the example of Jesus. If we want to know what God is like, we look to Jesus, true divinity. If Jesus is the embodiment of God, then the way he lived and died and what he taught has more authority.

And, if we want to know what God intended for us human beings, we look to Jesus, the exemplar of true humanity.

The so-called social Trinity comports well with Mennonite understandings of human relationships and community. According to this view, the Godhead is a community of equals — three persons sharing a divine unity who relate, fellowship and mutually indwell with one another. The Trinity is a communion of self-giving love. The social Trinity not only serves as a model for the church as a community but also as a corrective to Western individualism, hierarchical organizations and the will to power over others.

Beyond our limited view

Trinitarian faith keeps us connected to historic Christianity. It also keeps us engaged ecumenically. Belief in the Trinity is a requirement for membership in the National Council of Churches, World Council of Churches and World Evangelical Alliance.

This is a reductive approach to faith, focusing on what we do rather than what the Triune God has done, and continues to do, through us. Reinforcing a trinitarian faith is an essential part of claiming and passing on the faith once delivered to the saints.

I am part of a men’s group that includes Mennonites, a Lutheran pastor and a United Methodist jail chaplain. In our conversations I am reminded how limited our focus often is as Mennonites. We need vital relationships with other Christians who keep in front of us not just a trinitarian God but a God of grace.

Mainline Protestant colleagues taught me not only to say “may she rest in peace” when someone dies but to add “and may she rise in glory.” Unbelievers can say the first. The second is a wonderful testimony to the resurrection through belief in the risen Christ.

Mennonites have had fruitful dialogues with Catholics, Lutherans and Pentecostals. These conversations keep us alert to the pitfalls of a truncated faith. Every Christian group has blind spots. We need other Christians to help us see and correct ours.

From praise to silence

Trinitarian passages in the Bible are often part of doxologies, acclamations of praise. Confessing a Triune God leads to worship. It reminds us Mennonites, who are inclined to focus our faith on what we do, that faith is first and foremost about the Triune God.

Trinitarian thinking reminds us of the inscrutable nature of God, the God beyond our comprehension.

“O the depth of the riches and wisdom and knowledge of God! How unsearchable are his judgments and how inscrutable his ways!” (Romans 11:33).

While belief in a God who is one yet three leads to worship, it also leads us to silence in awe of a great mystery — a mystery beyond our understanding, but not beyond our embrace.

Richard A. Kauffman of Goshen, Ind., is an interim member of the pastoral team at Berkey Avenue Mennonite Fellowship and a consulting editor for The Christian Century.

This article accompanied by a piece by Reta Halteman Finger in the March 5, 2021, issue of Anabaptist World.