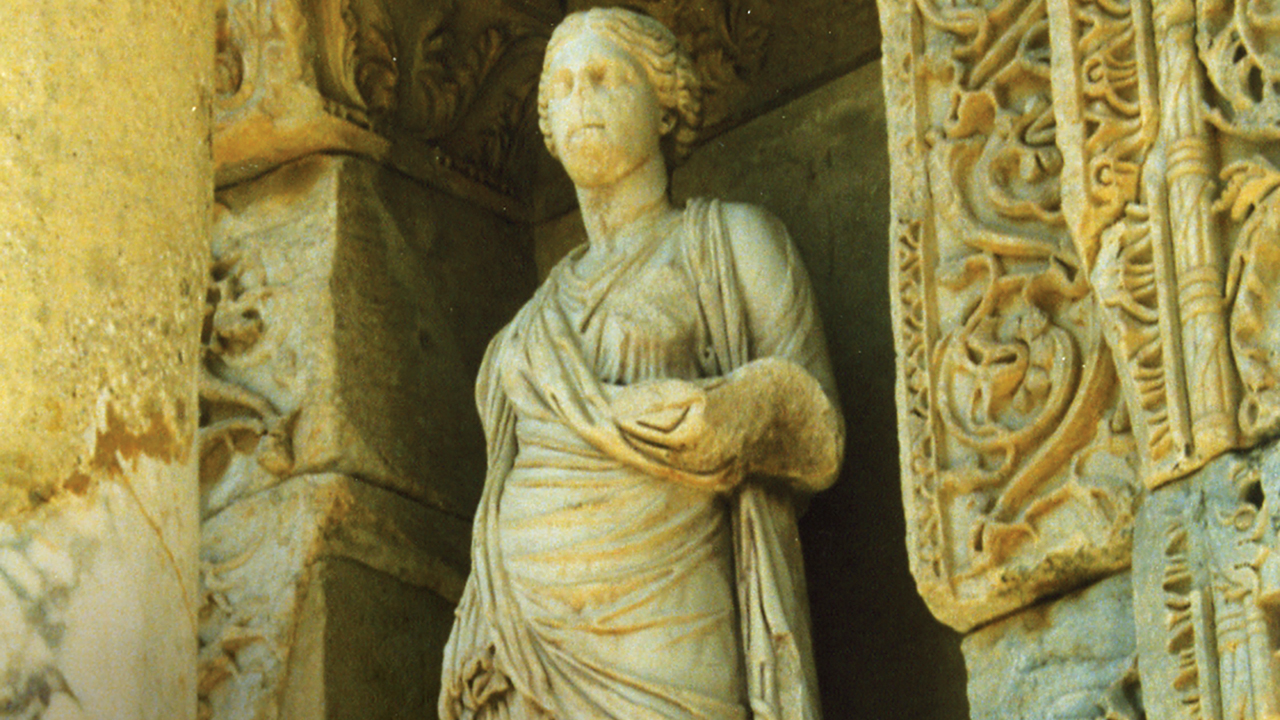 Personification of Wisdom at the Library of Celsus in Ephesus (second century). — Wikimedia Commons

This article accompanied a piece by Richard A. Kauffman on the Trinity in the March 5, 2021, issue of Anabaptist World.

Years ago in graduate school, I studied Hebrew, the language of our Old Testament. At one point, we had to translate the creation story in Genesis Immediately, two surprises turned up. First, the name for God was Elohim throughout the account. A typical name for a god is the masculine El, but Elohim is plural. What does that mean?

Second, in verse 2 the Spirit of God sweeps across the formless void. Hebrew is a gendered language, with every noun either masculine or feminine. Parsing the word endings, I realized with a jolt that Spirit — Ruah — is feminine. (All nouns ending in “ah” are feminine.) “The Spirit of God — she — swept across the face of the waters.”

Genesis 1:1-2 apparently tells us that Elohim-Ruah encompasses all of divinity and both genders.

In the Book of Proverbs we find more evidence of God’s expansiveness. (God is now named Yahweh — translated as “Lord” in the New Revised Standard Version). This collection of Hebrew poetry is set during the reign of Solomon, known as Israel’s wisest king. Thus it focuses intensely on wisdom, with another feminine noun: hokmah.

But Proverbs pushes further than grammatical gender. Primarily addressed to upper-class young men, it personifies hokmah as an attractive woman. In a patriarchal society where such men are tempted to embrace worldly pleasures with Dame Folly, Lady Hokmah stands in the town square and at the entrance of the city gates calling them back to their senses (1:20-33).

Yet amid these admonitions, magnificent poetry in Proverbs 8:22-31 raises Wisdom’s status to divinity. Here Lady Hokmah identifies herself “set up . . . before the beginning of the earth” to become a co-creator with Yahweh! “I was beside him, like a master worker” (verses 23, 30).

Lady Wisdom surfaces again in the New Testament, only now her Greek name is Sophia.

Sometimes Jesus is identified as the child of Sophia, but more often as Sophia herself. In Luke 7:18-35, Jesus defends the actions of both John the Baptist and himself by concluding, “Sophia is vindicated by all her children” (verse 35).

In times of stress, perhaps you, like me, have found comfort in Matthew 11:28-30, where Jesus welcomes us with “Come to me, all you that are weary and carry heavy burdens, and I will give you rest. Take my yoke upon you . . .” In these moments, Jesus becomes Mother Sophia herself. Years later I learned that Jesus was using Sophia’s words from the Wisdom of Sirach, one of the intertestamental scriptures. The cross-references are Sirach 6:24-30, 24:19 and 51:23-26 in the NRSV Bible with Apocrypha. “Put your feet into her fetters, and your neck into her collar; come to her with all your soul . . . for at last you will find the rest she gives.”

In the Gospel of John, the prologue (1:1-17) establishes Jesus’ status throughout this Gospel. Here Jesus as “Word” (Logos) is described as similar to hokmah in Proverbs 8: “He was in the beginning with God. All things came into being through him” (John 1:2-3). A few years ago, I wrote a study guide on John, and I can testify to the pervasive presence of Sophia throughout.

For many of us, these are new ways to envision the triune God. Yet they are as ancient, and as scriptural, as the Trinity metaphors we routinely use.

After retiring from teaching New Testament at Messiah University, Reta Halteman Finger adjuncts at Eastern Mennonite University, is a contributing editor at Sojourners magazine and is writing Sunday school lessons for MennoMedia.