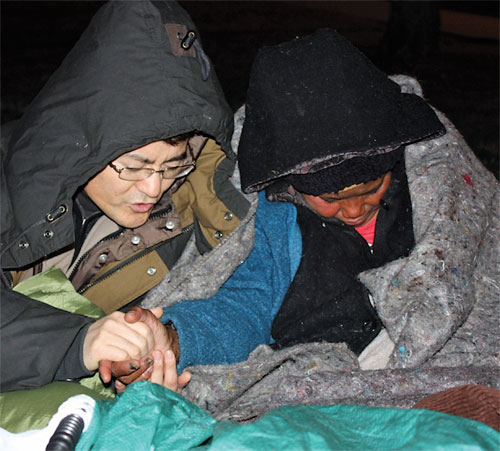 San Jin Choi (left) prays with an individual who is homeless. Photo provided

A Mennonite pastor’s insights on being homeless

I had a 30-day homeless experience from Feb. 21 to March 22, 2010, in Washington, D.C., Maryland, Pennsylvania, New York, New Jersey, Massachusetts, Connecticut and Atlanta. I slept in the shelters, subways and streets, and during the weekends I preached at the church and led seminars and workshops for ending homelessness.

Here are my reflections of my 30 homeless days.

Becoming unfriendly toward general people in the streets: After 15 days, I began to feel isolated and tried to look for a specific place where I could just sit down. I specifically searched for isolated places, even in the subway I sought out corners away from the crowds of people.

After 20-25 days, I wanted to be with other homeless people or the people who were isolated on the corners or sides of the streets. I found if people lost their home or had run away from home, they were highly vulnerable to drug dealers and gangs.

When I started growing a beard, people stared at me. Whenever I walked into shops, people didn’t ask, “May I help you?” Instead, they asked, “What do you want?” Even when I walked into a Korean restaurant in the Manhattan area, I was rejected inside after only 30 days of being homeless. I imagine that homeless people who’ve been on the streets for years must be rejected straight from the door and must feel even more unwanted. I saw that homeless people must feel rejections every day.

Where to go next: Generally around 6 or 7 a.m., all the homeless people in the shelters must leave. When I went out of the shelter at 6:30 a.m., I was apprehensive because I didn’t know where to go next. At that early time, the majority of the stores were closed. If I were to look for 24-hour businesses, sometimes I had to travel up to a mile. In many cases the homeless have huge bags and must carry them those long distances, as I did in New Haven, Conn. Day-care centers for homeless people are needed programs.
Some of the shelters in America do not provide breakfast for homeless people. In the morning, when I was in a shelter in Philadelphia, there was no meal, so many homeless people tried to go to a shelter that provided a meal, but they were often far away.

Military culture in shelters? Many homeless shelters feel like military camps. First, at the entrance to shelters there are several security guards, like armed police. They check your bags, pockets, shoes and your entire body, similar to an inspection before you go on a flight. In the shelter, many staff members also look like military personnel. They use loud voices and sometimes threats, utilizing military-like language and motions. I understand their conduct because many homeless people are alcohol or drug addicts and sometimes have mental problems. But because of the staff’s strict manner and behavior there are many conflicts. I saw as few as 10 to as many as 50 or more conflicts each day.

I saw verbal arguments and physical conflicts. Shelters are not a reassuring place. You are always on edge because you’re not sure what may happen next in the strict atmosphere with its military-like rules. Because of this, many homeless people feel compelled to stay outside these shelters and instead reside in the streets or local parks. Many homeless people suffer physical, sexual and emotional abuse and sometimes lose many of their belongings wherever they had stayed overnight.

“But strive first for the kingdom of God and his righteousness, and all these things will be given to you as well,” says Matthew 6:33. Seeking first his kingdom means restoration of his kingdom in our society. Poor or marginalized people are restored as kingdom citizens in our society. Also, I found that Jesus’ being homeless in his life is a revolutionary event. According to Matthew 8:20, “Foxes have holes, and birds of the air have nests, but the Son of Man has no place to lay his head.” That means Jesus was homeless at the time and lived like a homeless person for three years during his public ministry. His being homeless has implications for serving poor neighbors through his homeless experience and understanding who they are—how much they are hungry, thirsty and lonely. So I want to add a theological or symbolical name for Jesus: the Homeless One. Already we call him the Counselor, the Healer, the Master.

Jesus’ life looks like a homeless person who gave all his possessions to the people, including his blood and flesh through the Crucifixion. That means he did not gain anything from life because our permanent home is in heaven, in his kingdom. Jesus said in Matthew 6:31: “Therefore do not worry, saying, ‘What shall we eat?’ or ‘What shall we drink?’ or ‘What shall we wear?’ ” And in Matthew 6:34: “So do not worry about tomorrow, for tomorrow will bring worries of its own. Today’s trouble is enough for today.”

In conclusion, through his homelessness Jesus’ kingdom had been restored, and he has restored the homeless as citizens of his kingdom in heaven. His homelessness means Jesus humbled himself to the lowest level to serve all people, regardless of social rank. This is important for our society today.