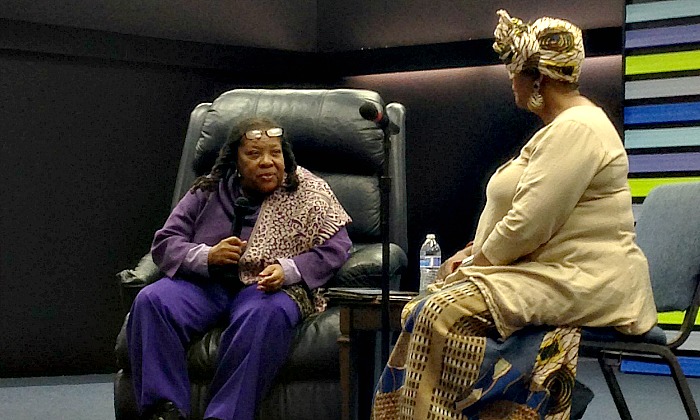 As participants arrived at Calvary Community Church (C3), Hampton, Virginia, on Feb. 2, it was clear that Hope for the Future (HFF) has created a uniquely safe space for people of color in leadership positions across Mennonite Church USA. Bear hugs, deep sighs and prayers of thanksgiving overflowed at the opening of the sixth annual HFF gathering. More than 70 participants were in attendance at the four-day event, titled “Doing Kingdom Work,” which ended with worship at C3 on Feb. 5.

For the past six years, HFF has been a point of connection and support for leaders of color across the denomination. For the past three years, key leaders who are white have also been invited to participate.

“We have come together for such a time as this,” said Carlos Romero, executive director of Mennonite

Education Agency and member of the HFF planning committee, in opening remarks on Thursday that spoke to the history of the gathering and framed the weekend’s work. That sentiment was shared by many of the people of color in attendance who, in the wake of the transition of U.S. presidential leadership and the flurry of executive actions in the days following, have been wondering what the current reality in the United States means for Mennonite Church USA, a historic peace church.

“The first few weeks of the new administration have increased the urgency for people of color and other marginalized groups. This urgency is not new,” said Regina Shands Stoltzfus, assistant professor of Peace, Justice and Conflict Studies at Goshen (Indiana) College and HFF planning committee member. “The conversation regarding violence against marginalized bodies is not new at all. We have been talking about this and working against it for years. The election and subsequent early actions from the new administration illustrate how much more unsafe this country will become — that is the new urgency.”

“This [current reality] has some very different consequences for people who are white and people of color,” said Iris de León Hartshorn, director of Transformative Peacemaking for Mennonite Church USA and member of the HFF planning committee. “For people of color this affects our lives, our families, our communities and our relationships. Even being a U.S. citizen as a person of color does not give you the same guarantees a white person has in our country.”

morning. He challenged participants to think about what it means to be communities of peace. Instead of framing peace in terms of nonviolent resistance to war, he encouraged the group to consider the women who influenced the life and ministry of Jesus: women such as Mary and Martha, the women who funded and supported his ministry, the women who were with him as he died, and his mother Mary, a 14-year-old girl, pregnant and unmarried. Villegas asked, “What would it mean to create communities of peace where people like Mary could thrive?”

Over the course of the weekend participants worked in caucus groups (people of color and white people meeting separately) and in multiracial groups with the option of exploring one of three tracks and presenting their thoughts and conclusions to the large group:

Participants also spent significant time listening to reporting from the board chairs and presidents/heads of the denomination’s churchwide agencies and educational institutions as a result of the “Intercultural Competence Call to Action,” produced out of the work of Hope for the Future 2016 and sent to the larger church in April 2016.

Ruby Sales, public theologian, historian, activist, social critic and educator, gave the keynote address on Friday evening. Sales joined the Student Nonviolent Coordinating Committee (SNCC) in the 1960’s while attending Tuskegee (Alabama) University. She took part in the Selma-Montgomery marches in 1965 and was later arrested and jailed for participating in a demonstration at a whites-only grocery store. After her release, she and several others entered the store to purchase sodas and encountered Tom Coleman, a construction worker and special county deputy who was carrying a shotgun. Sales was pushed out of the way by Jonathan Daniels, a fellow protester and white Episcopalian seminarian. Daniels was shot and killed by Coleman, saving Sales’ life. Sales is the founder and director of the Spirit House Project, a nonprofit organization that brings diverse people together to work toward racial, economic and social justice.

In her address, Sales spoke about two narratives taking place in the U.S. today: the narrative of genocide, white supremacy and patriarchy; and the narrative of abolitionists, labor organizers, heroes and heroines. She also recognized the despair so many people are experiencing in this moment in history. “People are wandering in the wilderness, trying to figure out the sound of their names in a new reality,” she said.

Sales presented the group with this challenge: “If we follow Jesus, we must find the courage to stand up and speak truth to power and to each other.”

“Ruby was prophetic,” said Sue Park Hur, co-director of ReconciliAsian and co-pastor of Mountain View Mennonite Church in Upland, California. “She spoke to exactly what we were talking about in the Black Lives Matter group.”

Lives Matter and Anabaptist People of Color. During the sessions, Shands Stoltzfus led participants in a discussion exploring what it means to be a Peace Church considering the lived reality of people of color in the United States today.

To begin the people of color caucus, she recalled the killing of Michael Brown that ignited the Black Lives Matter movement, reading an excerpt from Keeanga-Yamahtta Taylor’s book, #Blacklivesmatter to Black Liberation:

“Every movement needs a catalyst, an event that captures people’s experiences and draws them out from their isolation into a collective source with the power to transform social conditions. Few could have predicted that white police officer Darren Wilson shooting Mike Brown would ignite a rebellion in a small, largely unknown Missouri suburb called Ferguson. For reasons that may never be clear, Brown’s death was a breaking point for the African-Americans of Ferguson — but also for hundreds of thousands of Black people across the United States. Perhaps it was the inhumanity of the police leaving Brown’s body to fester in the hot summer sun for four and a half hours after killing him, keeping his parents away at gunpoint and with dogs. ‘We was treated like we wasn’t parents, you know?’ Mike Brown Sr., said. ‘That’s what I didn’t understand. They sicced dogs on us. They wouldn’t let us identify his body. They pulled guns on us.’ Maybe it was the military hardware the police brandished when protests against Brown’s death arose. With tanks and machine guns and a never-ending supply of tear gas, rubber bullets and swinging batons, the Ferguson police department declared war on Black residents and anyone who stood in solidarity with them.”

Shands Stoltzfus asked parents to imagine their own children lying dead or dying in the street. She asked them to imagine what it would be like to have police with guns and dogs keeping parents from their children. For many people of color, the exercise didn’t require much of a stretch of their imagination. Several people named the visceral fear that they carry all the time — fear for themselves, fear for their spouses and fear for their children. Participants shared stories of pain, discrimination and mistreatment, and they spoke about a church that too often justified, minimized or avoided addressing these experiences.

The group decided it was time for white leaders and members of Mennonite Church USA to reconsider what it means to be a peace church. People of color named that many of them had chosen to join Mennonite Church USA because of its professed peace theology, but they were discouraged at the church’s silence in the face of increasing discrimination, oppression and fear. The group began the work of defining what a Peace Church means for them.

They presented these ideas to the large group:

After the Black Lives Matter group’s presentation, de León Hartshorn called for a moment of silence.

Later, reflecting on what happened, Park-Hur said, “If we do not see each other as committed members of God’s family, if we don’t see the worth in each person, we cannot be church together.”

Feedback from HFF 2016 indicated that many people of color across the church were looking for more resourcing, a stronger network and a clear purpose, vision and mission for HFF.

“Gathering once a year for many has felt that this isn’t enough to build relationships between leaders of color,” said Gilberto Pérez, senior director of Intercultural Development and Educational Partnerships at Goshen College and member of the HFF planning committee. “The planning committee decided that we should spend significant time at Hope for the Future discussing what our work means and how we should relate to one another moving forward.”

Participants in the Our Future Together group did just that. They imagined a future where HFF would work in two distinct ways: resourcing (capacity building and leadership development) and holding agencies and organizations accountable. According to Pérez, the details are still being worked out, but plans are in the works to invite more people of color to the planning committee to help HFF move intentionally into this vision.

Chantelle Todman Moore, co-founder of Unlock Ngenuity, said, “Hope for the Future needs to be not only a refuge but a space that participants can leave ready to engage in our broken world, to speak truth to power and embody being a peace church that sees and acts for justice.”

Sexual Abuse/Misconduct and People of Color

Members of Human Resource departments (as well as others) were invited to the track Sexual Abuse/Misconduct and People of Color. De León Hartshorn and Romero led this discussion.

“I think we had tough conversations all around,” de León Hartshorn said, “But I do think we came up with some helpful things to think about.”

The group discussed creating and implementing human resource audits to begin noting and documenting inconsistencies where policies and procedures are applied. They agreed that too often organizational culture trumps policy and procedure.

“Familial relationships among our white brothers and sisters is one of those cultural realties in our institutions,” de León Hartshorn said, “and the tendency is different treatment for those within the ‘Mennonite family’ compared to those ‘outside’—people of color.”

The group also observed that when people of color are disciplined for misconduct, the tendency of our institutions and organizations is to view that person as representative of their entire race, and so it is unlikely that a person of color would replace a person of color who was disciplined. That never happens with white people, the group agreed.

A call to the church

HFF concluded with participants dividing back into separate racial caucuses to reflect on all they had processed and experienced together.

“I think that believers of color are beginning to embrace and practice a bold theology of disruption rooted in love that calls for the church to truly bring God’s Kin-dom here on earth as it is in heaven,” Todman Moore said. “From the Black Lives Matter discussions to Issac Villegas’ powerful devotion centering women to Ruby Sales helping us to remember our own history as a nation through the Civil Rights movement, the call was for the church to get woke.”