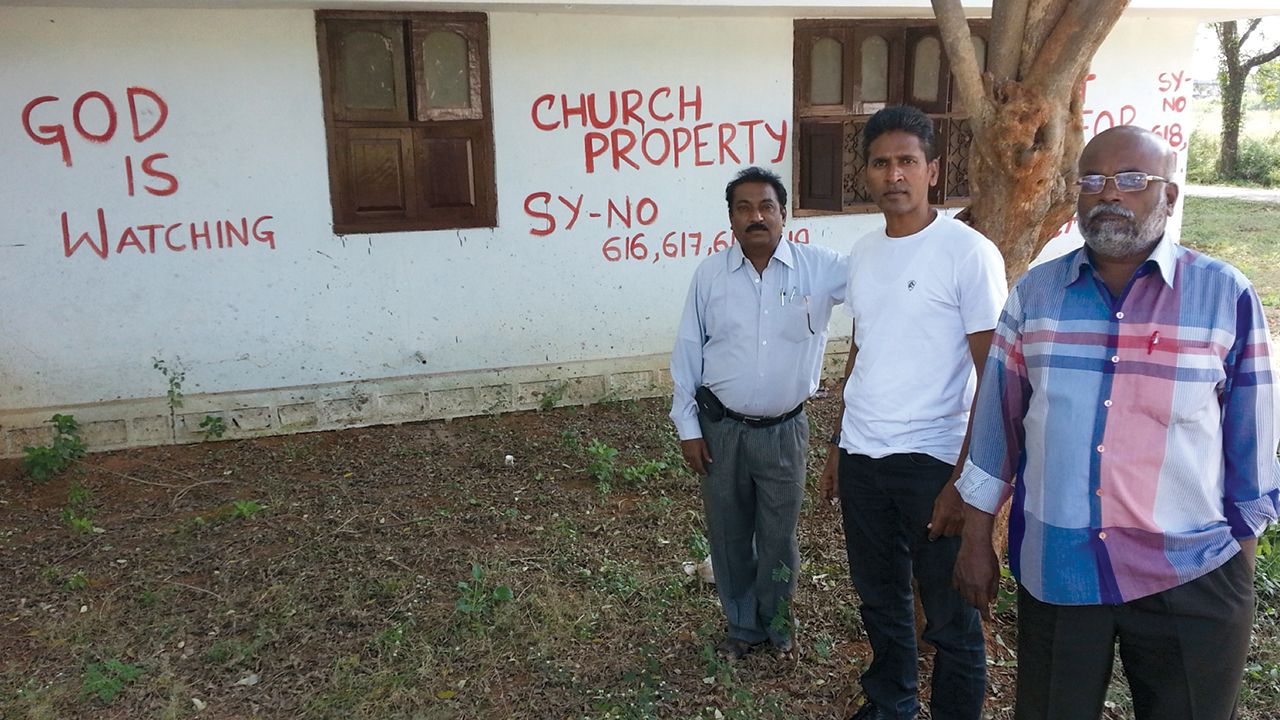 Members of the ad hoc committee for the General Council of MBCI, including Paul Gandham, center, painted warnings on the walls of Shamshabad Mission Compound and Bible College in 2013 after they say MBCI President P.B. Arnold made an illegal resolution for a financial transaction involving 25 of the property’s 34 acres. — Paul Gandham

Long-simmering leadership conflicts in the Mennonite Brethren Church of India reached a crisis point in recent years, prompting the International Community of Mennonite Brethren to declare in August that it no longer recognizes the India conference president’s leadership.

In September, ICOMB’s 22 conferences called on member churches to pray for healing and peaceful transition in India, where P.B. Arnold has been president of the conference of 212,000 people in about 1,000 churches since leadership transitioned from mission workers about 40 years ago.

ICOMB has been sending correspondence to Arnold for at least a year, expressing concerns about reports of unbiblical abuse of power and authority, misappropriation of resources, the use of judicial courts to resolve disagreements, wounded confidence among international agencies and institutions and a lack of transparent leadership elections.

Paul Gandham, secretary of an ad hoc committee that opposes Arnold’s leadership, said Arnold, who is 82 years old, should have stepped aside in 2004, when he allegedly began creating illegal documents to sell off conference properties and keep the funds.

Arnold is an accomplished surgeon who has contributed much to the medical field for several years. He did not respond to Anabaptist World’s attempts to contact him by email and phone.

“Arnold was selling properties of MB Mission in India, claiming he is the rightful owner of these properties,” said Gandham, who claims 90% to 95% of MB congregations support the opposition activities of his group. “He was playing mischief with the church documents. He made some illegal resolutions with a small group of leaders, and he has some clout with local politicians. . . .

“He enjoys the money. He spends it on his family. He has two apartments in London. He has a lot of property owned privately. He started a private trust, and he transfers this money to that trust to spend on his personal things. The Mennonite conference has no say in that.”

The ad hoc committee is based out of Mahabubnagar Mission Bungalow, which was built in 1888. The MB conference was officially registered there in 1958, but the building fell into disrepair until 2017, when the committee refurbished it. Gandham said Arnold filed three lawsuits against the committee to leave the space, but police and courts did not accept the claims.

“Unfortunately, he is also president of the MB property committee and has power of attorney,” he said, requesting prayer for improved leadership and ministry revival. “During his tenure, he has closed down three hospitals — one in 1979, one in 1985 and one in 2018. One nursing school closed down in 1995. One Bible seminary closed down in 2006.”

The ad hoc committee has tried to impede Arnold for about 12 years. Gandham and others have erected signs and painted on walls at mission compounds and Bible schools declaring the properties are not for sale.

When fasting prayers, marches or hunger strikes have been held at buildings where Arnold is present, Gandham said law enforcement officials are summoned to disperse protestors.

The committee began filing its own lawsuits against Arnold in 2008.

“In India legal things take a lot of time, and the legal system is extremely slow,” Gandham said. “It takes 20 to 30 years to solve things, so for 10 to 15 years this litigation is going on, and the whole time Arnold is trying to sell properties to get the money.”

The group estimates more than $4 million in property sales and rent has been taken. When Arnold allegedly attempted to lease Wanaparthy Mission Bungalow for use as an Islamic seminary, the committee held a march and burned an effigy of Arnold.

“We have taken extreme measures, but that is common in India,” Gandham said. “We are trying to get the attention of people who are buying these properties. They are not Christians, they are just businesspeople.”

ICOMB sent a letter to Arnold in August informing him all national conferences in ICOMB no longer recognized him, or any of his designees, as the president.

“While we appreciate the many good things that have happened during the transition from mission to church under your leadership over the past 40 years, there comes a time when all of us must step aside to allow for new leadership to arise,” the letter stated. “That time has already passed for you.”

ICOMB requested action and a response from Arnold within 15 days but did not hear back from him, prompting the body to distribute a letter Sept. 13 informing the India conference’s churches of ICOMB’s declaration.

“We are convinced that the first priority should be recognizing the brokenness for the conference and seeking healing in the power of the Holy Spirit.”