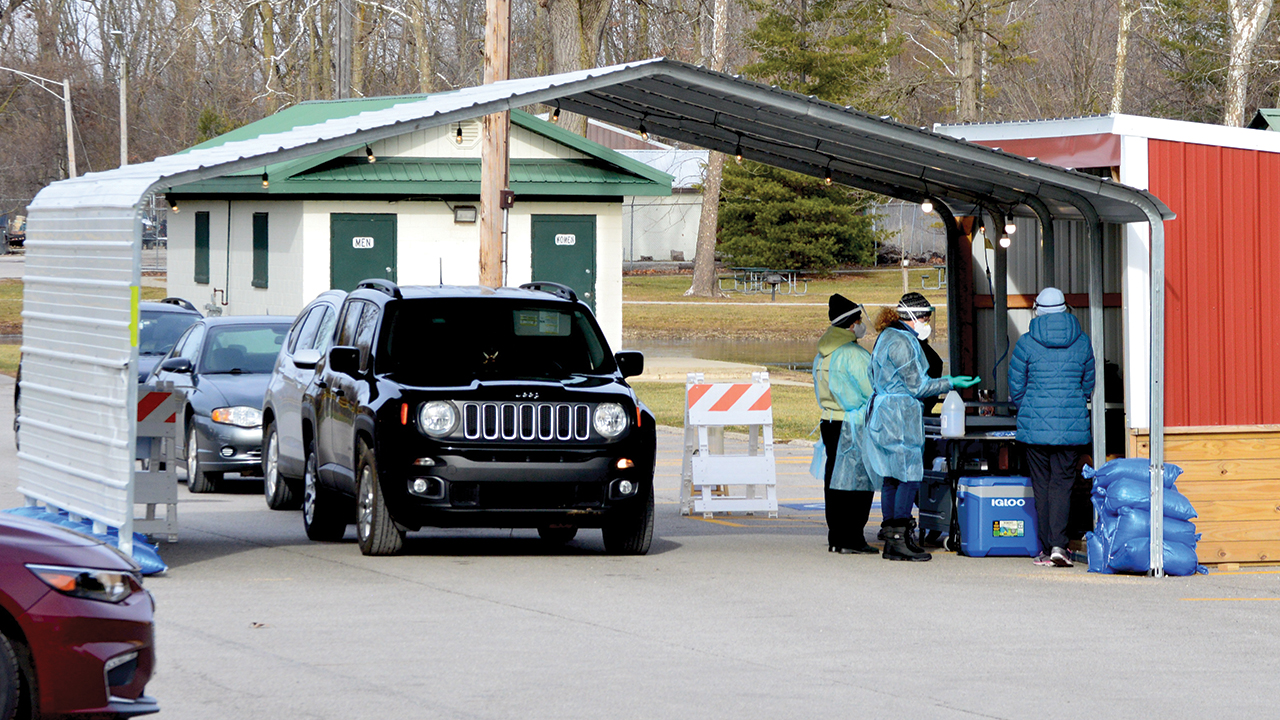 Cars line up at Shanklin Park in Goshen, Ind., for COVID-19 testing from the Center for Healing & Hope. — Missy Schrock

Missy Schrock, a member of Berkey Avenue Mennonite Fellowship in Goshen, serves as executive director of the Center for Healing & Hope, which is housed at Plymouth United Church of Christ and focuses on health care for immigrants and the uninsured. Michelle Shelly, a medical doctor and member of Assembly Mennonite Church in Goshen, is medical director of the center.

The center’s foray into testing began by responding to a need expressed by the local Hispanic community.

“We started getting calls from the Latino/Spanish-speaking community with symptoms of COVID, and we tried to figure out how we could get them tested,” said Shelly, speaking of the early days of the pandemic.

Non-English speakers and the uninsured were facing significant obstacles in getting tested. A $200 copay was required for those without insurance; telephone callers had to wait for almost two minutes until they could hear information in Spanish; and, once at a testing site, there were no signs in Spanish and very few people spoke Spanish.

Unlike the two other state testing sites in Elkhart County, the Center for Healing & Hope began to offer rapid antibody tests, which informed people of their results right away.

“We became known as the place that was offering these rapid tests,” Shelly said.

“We thought we had a pretty good system in our parking lot here at Plymouth United Church of Christ, but we started getting slammed, and so cars would be waiting for two or three hours,” Schrock said.

The City of Goshen addressed the problem by offering the use of Shanklin Park near the heart of Goshen, as well as Schrock Pavilion, a much-needed enclosed space at the park.

Shelly added that none of this would have been possible were it not for the work of volunteers.

“I remember there were times I looked out over this field of volunteers — they pulled together for the community, and just seeing that volunteer effort was so gratifying,” she said.

Shelly also recalled the impact the center’s work has had on those who have been tested, many of whom waited for several hours.

“They were so grateful and so gracious; they recognized that we were putting ourselves in harm’s way,” she said.

Schrock is grateful for donations that have supported the center’s work.

“Community support, financially, has been really extraordinary and gratifying,” she said, “that people were willing to donate their stimulus checks, that they were pouring themselves out to us in the ways that they could.”

Ultimately, it’s been about collaboration and cooperation, not only with volunteers and center employees but also between Schrock and Shelly.

“I could not have done this without Missy, and I don’t think Missy could have done it without me,” Shelly said. “Both of us bringing our strengths together allowed us to do it — me on the medical side, and her on the business and organizational side.”