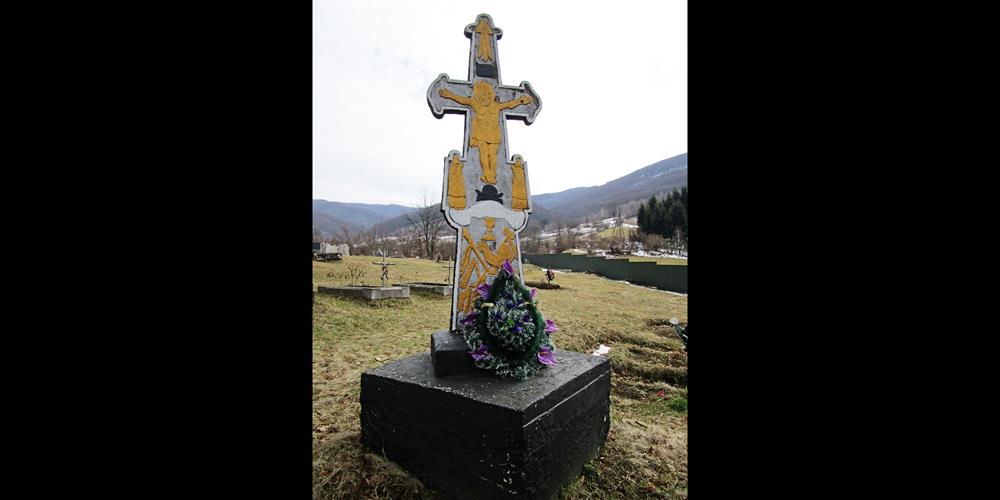 A wayside crucifix in Ukraine’s Carpathian Mountains testifies to God’s presence in the midst of suffering. Photo by Mary Raber.

Explosions shook the ground for hours as a fire raged through a munitions depot in Ukraine. Church members with cars rushed to ferry people out of the neighborhoods closest to the blaze. Repeated blasts shattered all the doors and windows in the church building they had constructed themselves. For 10 days, the congregation managed to feed their own families and their homeless neighbors, even though they were without gas, water or electricity.

This disaster happened a year ago, and though the church is still recovering from it, members thank God. “We’re so grateful for everything we’ve learned about listening to God,” says Volodya (a pseudonym for security reasons), who is a Baptist pastor from a city north of the militarized zone in eastern Ukraine.

Now, in the fourth year of the war, there is relatively little reporting in the West, though the war has claimed more than 10,000 casualties and created about 1 million refugees. Many who have remained in the region are those unable to run—the elderly, disabled and small children. However, all participants at a retreat last March had decided to stay and minister despite danger and difficulty.

When I agreed to attend the retreat, I braced myself for tears and heartbreak. What would the participants say about what they were going through? Would they be depressed? Angry? Unable to sleep?

Some wept as they described days of shelling, tense encounters with military officials and exhausting efforts to provide food for helpless neighbors. They talked about death, impossible decisions, hunger and fear. They prayed for wisdom and courage. But that was only part of the picture.

Under the circumstances, I could understand gloom. But I was not prepared for gaiety, exuberant singing and helpless laughter.

Some of the lighthearted mood was doubtless due to relief and delight at being in the Carpathian Mountains in western Ukraine. The retreat provided a few days off from daily worries, and the participants made the most of it. Some laughter was a release of tension and could just as easily turn to tears.

Over and over, from the depths of difficult situations, people like Volodya described their profound sense of divine presence and guidance. One couple marveled at their abiding peace over their decision to stay in the region. Others rejoiced that, paradoxically, the war had brought them into a new relationship with formerly hostile or indifferent neighbors, allowing them to share the gospel. Another couple had taken in 10 children and reflected on the surprising ways God continued to supply their needs. All agreed they were glad to be alive.

No one had illusions about the future, but they were prepared to stay where they were, convinced God would continue to be with them. Their faith stabilized them, made them resilient, free to sing and laugh. This must be what Nehemiah meant when he told the exiles who had returned to Jerusalem from the Babylonian exile that “the joy of the Lord is your strength” (Nehemiah 8:10).

What makes the joy of the Lord so powerful?

First, unlike mere optimism, it does not depend on favorable circumstances or wishful thinking. It comes from God’s own presence (Psalm 21:6), and because it is “of the Lord,” it is eternal. Even when we do not feel it, it is never gone, any more than God ever leaves us.

Second, God’s presence assures us of God’s care. These believers could see blessings all around and thanked God, rejecting self-pity and fear and generating more joy.

Finally, while joy does not deny sorrow, it always has the last word: “Weeping may remain for a night, but rejoicing comes in the morning” (Psalm 30:5). Or, as Jesus assured the disciples, “In this world you will have trouble. But take heart! I have overcome the world” (John 16:33).