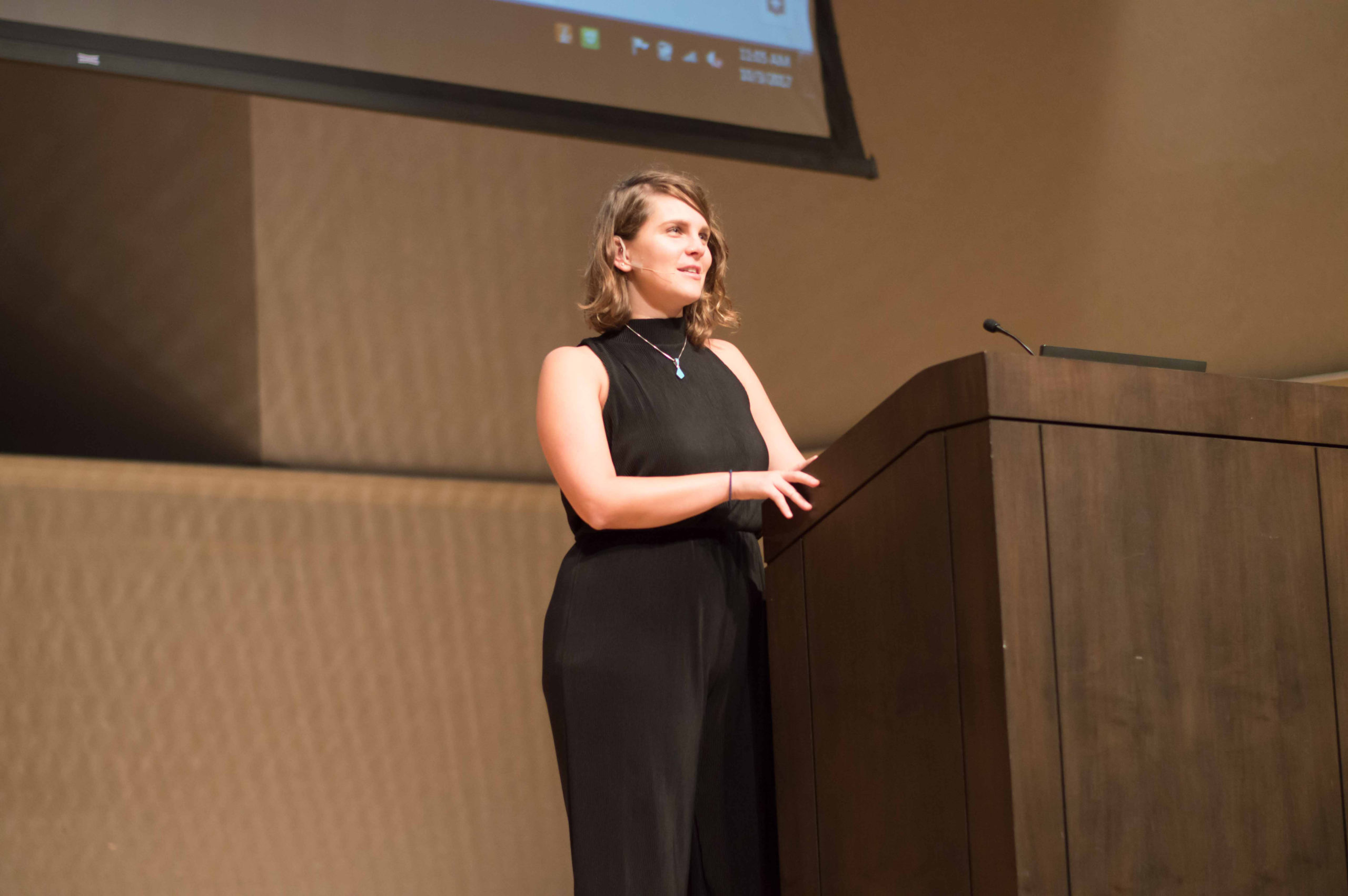 There’s a saying that goes “the truth is stranger than fiction.” Marisa Gerber, staff writer for the LA Times, proved that point with a fake news quiz given during her Oct. 3 Forum presentation, “Telling True Stories in the Era of Fake News,” at Bluffton (Ohio) University.

Gerber read four headlines to the audience—three from fake news websites and one factual headline. The statement published in a legitimate newspaper was, “Fish fall from sky with rain in northern Mexico.” The story referred to a natural event associated with a hurricane. However, the example highlighted just how difficult it can be to sort out real news from fake news.

While some hard-to-believe stories are filled with truth, “passing on lies as truth has existed forever,” explained Gerber. Today, the spread of fake news stories is being amplified because of the rapid ease of sharing information through social media.

When Gerber asked, many in the audience responded that they get their news from Twitter, and Gerber admitted that she gets a lot of her news from there as well.

“I think what’s changed is journalists aren’t able to be as tight of gatekeepers of information as they used to be. That’s okay. People should get information from a lot of places, but I also think they should go to websites and newspapers they trust to get the fullest picture of the truth as possible,” said Gerber.

She suggested that if a story seems dubious, do a search to see what other outlets, if any, are reporting the same information. Are reputable news organizations sharing the same story?

Besides fake news, journalists are also facing challenges that can lead to doubt in their reporting, “We really want to be right, but we also want to be first. And there’s a lot of pressure to be first.”

Gerber pointed to CBS News recently announcing Tom Petty’s death, when in fact he was alive but had been taken off of life support. Gerber says she and her colleagues at the LA Times are required to confirm information through two sources before publishing.

According to Gerber, one of the main challenges in journalism is “the cultural movement that if you don’t like something you just say ‘oh, that’s fake news.’ My colleagues who write about politics get this a lot. A lot of people don’t believe politicians, and they really don’t believe the media,” said Gerber, who typically covers the LA County Courts. “I work in the criminal court system and there people tend to be ultra-aware of reality.”

Since 2012, Gerber has covered high profile cases from the sentencing of The Grim Sleeper serial killer to the stories of recently exonerated inmates who had spent decades behind bars.

She also covers breaking news and was part of the LA Times team that won a Pulitzer Prize for breaking news reporting for the coverage of the San Bernardino, California, mass shooting. More recently, she covered the mass shooting in Orlando.

While the events she covers are often tragic, Gerber says she has also experienced the “resiliency of humanity. Where there’s despair there’s also community and grace and forgiveness.”

And because of those moments, she encouraged students to pursue journalism. “It’s definitely a hard job, and it’s a changing field, but if you feel really passionate about it and you love telling stories, go for it.”