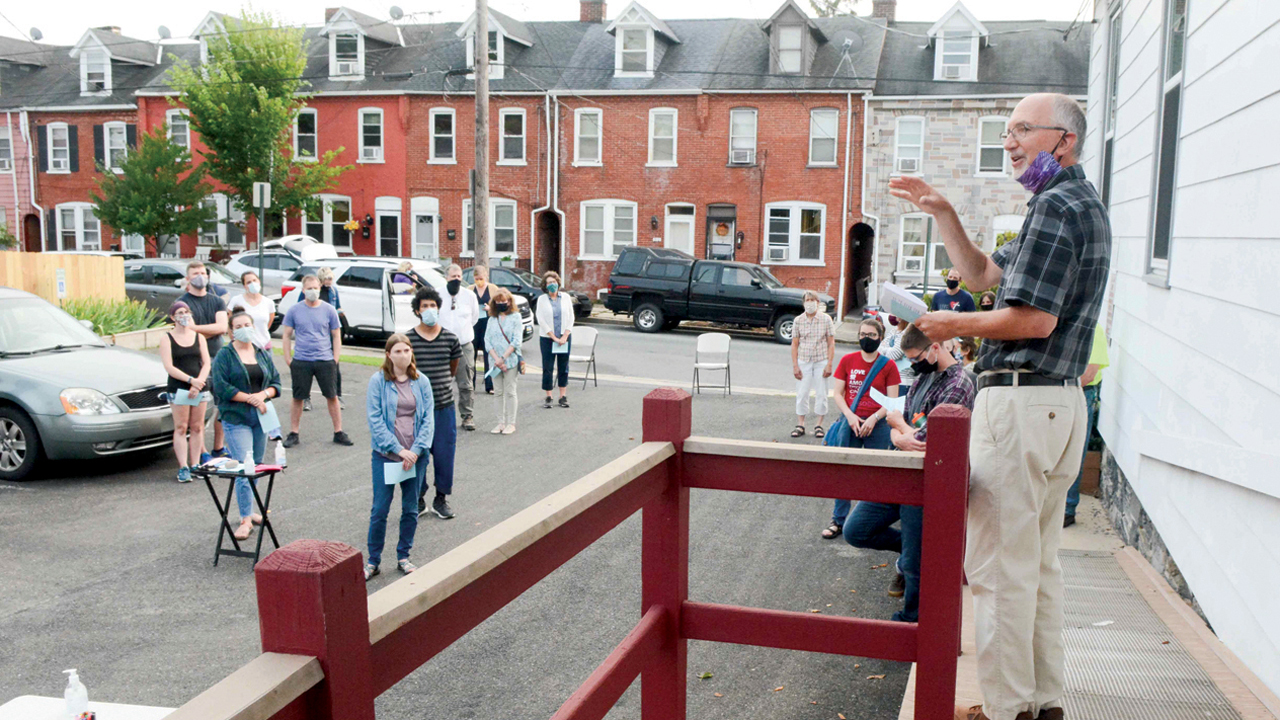 Laurel Street Mennonite Church co-pastor Ron Zook speaks during a time of prayer and conversation at the Lancaster, Pa., church one day after Ricardo Munoz was shot by a Lancaster police officer Sept. 13 across the street from the church. — Dale D. Gehman

When Ricardo Munoz was fatally shot by a police officer Sept. 13 in Lancaster, Pa., it wasn’t just a call to action for how the community responds to mental health and racial concerns, it redefined the concept of holy ground for Laurel Street Mennonite Church.

A matter of hours later, the Munoz family called 911 because of aggressive behavior, after not making progress with a crisis-intervention organization and the police department’s nonemergency number. Video released by law enforcement shows Munoz, 27, holding what appears to be a knife. The shooting took place across the street from the church.

“I stood on bare feet on the parking lot and it was rough, it hurt my feet,” Ron Zook said. “And it just felt like a really holy moment standing there — a moment I will not forget. But then we had no idea that four or five hours later our parking lot would become the staging area and command center for the police.”

Mirroring events in cities across the U.S. and around the world, racial tensions escalated as demonstrators gathered outside police stations and damaged police property at several locations.

The Zooks made their way to the church, where they could only access the building through a side basement door because the street was closed off. Protestors clumped at each end of the block.

Judy Zook said the Munoz family was in the parking lot, and they worked to be a calm and peaceful presence for the family.

“We were caught in the middle of being there for the family and neighborhood, but also answering the requests the police had. It was a night we will never forget.”

Looking back on the morning’s worship service in the same place, Zook realized the situation was another “burning bush,” and the congregation should not just sit to the side.

“So on the spur of the moment, the next morning we planned an evening event to invite the neighborhood to come for a time of conversation and prayer,” she said. “For me that really became a holy moment.”

The church set up stations in the parking lot. Social worker Janelle Bitikofer, a member of the church who recently wrote a book about how churches can be involved with people experiencing mental illness, sat at one station to listen to stories of grief. Visitors could write words of comfort and love for the neighborhood on poster boards or on cards for the family. After closing with prayer, the Zooks took the cards and bouquet across the street to the family.

“It was just a holy moment as they received the flowers. They knew what we were doing as we gathered,” Judy Zook said. “Through their tears and anguish, they wondered if they had done everything right calling the police for their son who was experiencing stress from his illness.

“I think the whole community is wondering how we could have handled it differently. You want to put blame on systems; it’s a hard thing.”

Although the Munoz family already has a church family, they’ve invited members of Laurel Street to return in the future. The Zooks are working with others to plan a community prayer vigil and hope the church can continue meeting outdoors in the parking lot as long as weather allows as a way of being physically present with the neighborhood.

“There is a lot of division right now, even right in our own neighborhood, and we’re trying to not put blame on anybody. We’re trying to promote unity to gather together and how we can move forward in healing,” Ron Zook said. “There’s just tremendous fear and hurt and anger right in our neighborhood. And we’re also looking at how systems could work better in the future. It’s been so amazing; like Judy said, we keep finding these spaces of holy ground.”