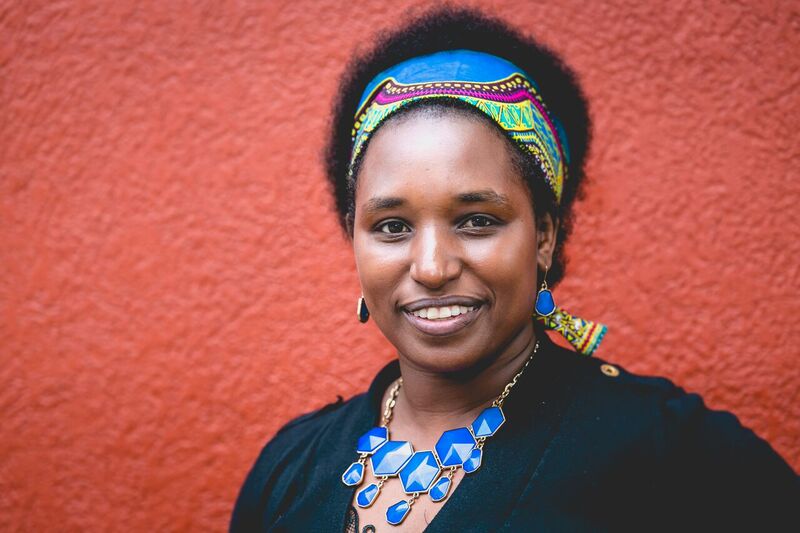 This article originally appeared in the September issue of The Mennonite magazine. To read more features on new models for church, read our current issue online or subscribe today. Photos of Francine Maombi by Charissa Johnson Photography.

Recently, the congregation has partnered with Mennonite Central Committee Great Lakes to pioneer a new group program, focusing on empowering some of the most recent arrivals to their congregation, many of them recently resettled refugees who have sometimes had a difficult time finding sustainable employment.

“The grant program came out of the desire to better the lives of our brothers and sisters who we basically don’t think are getting a fair shake,” said church member Autumn Williams, in a January 31 phone interview. “Sometimes this is because they don’t have a traditional American education or strong English language skills. So even if they have education from other countries, that’s not being valued and the jobs they are getting are substandard at best.”

“A big part of this is acknowledging power,” said Stephen Lamb, associate pastor of youth ministry at Living Water. “It’s about seeing our brothers and sisters as people who have worth and being a part of redistributing opportunities for people.”

Lamb was part of a team that worked alongside Jean Marie Bikorimana, a member of the congregation who grew up in Tanzania and recently moved to Chicago with his family. In 2016, Bikorimana was a senior in high school and was also working 60-70 hours per week to try to support his three brothers and sisters.

The church talked with Bikorimana about ways they could walk alongside him and what emerged was a plan to help Bikorimana network and get better equipped to find a job after graduation. With support from the congregation, Bikorimana enrolled in 12 weeks of training at a trade school. By the time he graduated, Bikorimana had found a skilled labor job that allowed him to earn well above minimum wage and had a regular Monday-Friday schedule.

Once he started work, Bikorimana started to become aware of other job openings within his company 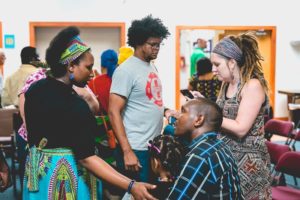 and sister organizations as well. He used his network to help other members of Living Water complete applications, develop their resumes and get a foot in the door for job interviews.

Lamb says that this model of leadership develop and the ripples it created inspired the church to start dreaming bigger.

“It felt like Jean Marie was blazing a new trail,” said Lamb. “This was something we went to MCC [Great Lakes] with. We told them what was going on and basically said, ‘We would love to partner with you.’”

MCC Great Lakes helped to provide a stipend for Bikorimana while he completed trade school and is talking about additional funding for the congregation to help them experiment with additional job creation and apprenticeship models. MCC’s funding supports 75 percent of the efforts and the congregation is committed to funding 25 percent of each project.

““We’re excited about this model of ministry,” said Krista Dutt, MCC Great Lakes Chicago Program Coordinator. “In order for people to be able to take care of themselves you have to have a way of working at vocational training that emphasizes each person’s dignity and these programs seem to do that.”

The congregation has now partnered with another member, Francine Maombi, who is originally from DR Congo. Maombi was very involved at the church, but struggled to find steady employment that could provide for her family and also allow her to be home at reasonable hours. Williams runs a catering business, Urban Tables, at the church and, using grant funds, she was able to hire Maombi. While Maombi worked and learned about the business, she was able to take time to earn a food-handling permit that would allow her access to a broad range of food service jobs.

“I love that this job is in the church and in my community,” wrote Maombi in a March 30 e-mail. “I enjoy what I am doing and I like the people I am working with. My kids are close and I can set my schedule around what my family needs.”

“The whole concept of Urban Tables is to decrease stress for urban families by getting work and providing jobs that don’t take people away from families,” said Williams.

Maombi has also left her mark on Urban Tables’ style, too. She helped to host a pop up café for the congregation and community that featured Congolese food and music and art by local musicians.

Emanuel Kalimili, a member of the congregation originally from Tanzania, displayed some of his art at the café event and was able to sell 7-8 paintings in one evening.

“My hope is that Urban Tables will grow that so we can help others who do not have jobs from our church or our community,” wrote Maombi. “We can teach them and train them so that they can work with us instead of going far away to do really hard jobs.”

The congregation also has a number of other pilot projects in the works, with ideas ranging from hiring teenagers to go out on “bulk shopping trips” to buy basic groceries in bulk that could then be sold conveniently at the church. Williams says she realized that not only is getting to a grocery store sometimes difficult because of transportation and city traffic, but church members may not have the ability to compare costs from store to store and might end up overpaying. One example of this is selling eggs for $1 per dozen, roughly $4 less than many of the people purchasing the eggs were paying at local chain grocery stores.

Several women in the church have also worked to start a small sewing business, making fabric shopping bags and aprons that the church is helping to sell. The business is being subsidized right now in hopes that it will eventually grow to be self-sustaining.

“We’re trying to look at the skills that already are there in our community,” said Lamb. “How can we redistribute opportunities or come alongside someone and say, ‘We see that you have gifts and we want to work alongside you so you have opportunities to use those gifts.’”

“Our faith commitment is to being a part of this neighborhood. When our neighbors do better we do better,” he said. “That’s part of the gospel: helping people put food on the table no matter who they are.”

This article originally appeared in the September issue of The Mennonite magazine. To read more features on new models for church, read our current issue online or subscribe today.