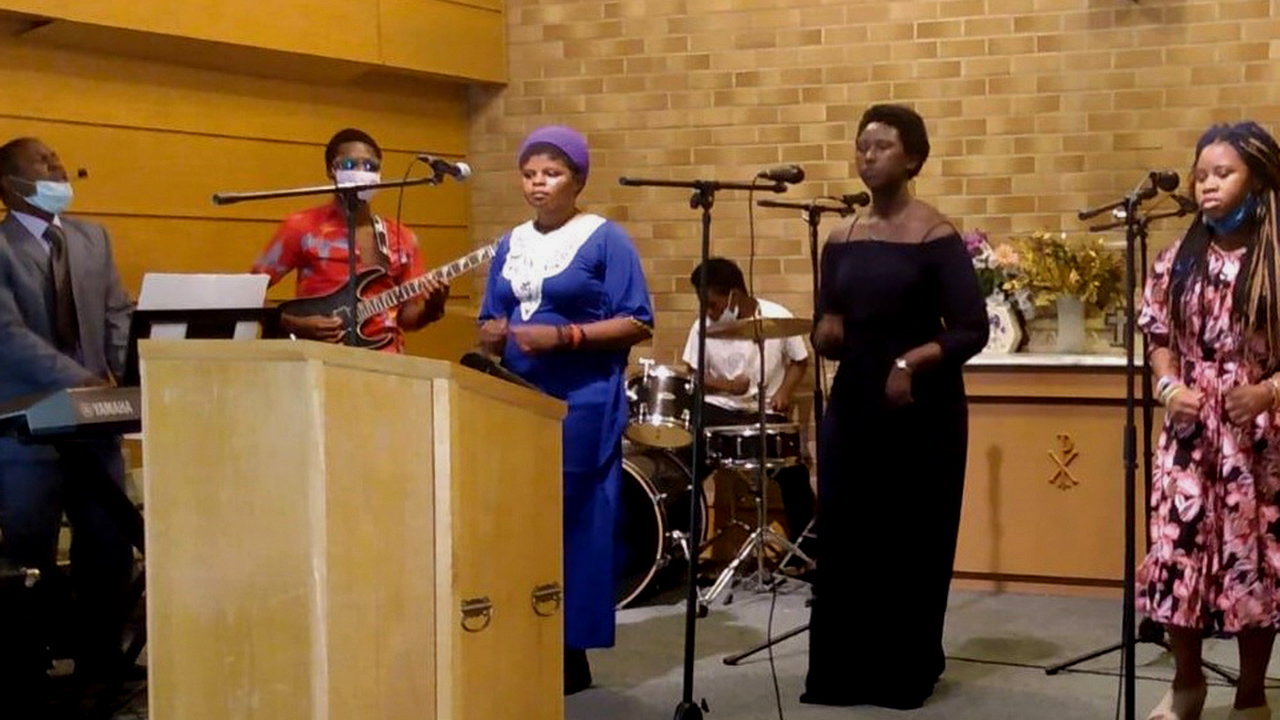 From Kenyan refugee situations to Kansas immigrant communities, Masemo Wakibogo ministers to others. The latest chapter of following God’s call in his life is a young and growing Swahili church plant in Wichita that celebrated its one-year anniversary Dec. 6 and is inspiring much older congregations across South Central Mennonite Conference of Mennonite Church USA.

The twin challenges of immigration and the COVID-19 pandemic create opportunities for Wakibogo to assist others and form relationships.

“The best thing is to connect with the community,” he said. “You make a friendship and a good connection, and you find a way to share the word of God. There are many families in Wichita.”

Although Wichita sprawls over a relatively large area, it doesn’t take long for immigrants from the Democratic Republic of Congo and other African countries to find each other. Wakibogo — whose family arrived in the United States on Dec. 15, 2016 — accompanies newcomers to a host of meetings to translate and explain.

“The thing that makes me different is I serve people more than other pastors,” he said. “I am very flexible to take people to hospital — anyone who calls me. I don’t care if you worship with me or not. If it is [140 miles away to] Topeka, I will take them.

The oldest Mennonite congregation in Kansas continued a legacy of supporting missions when Spring Valley Mennonite Church in Canton held its annual Fall Missionary Day Oct. 11. Much of that day’s offering was given to support Amani.

Spring Valley, founded in 1873, is the subject of a new book, First on the Prairie: The Story of Spring Valley Mennonite Church, by historian John Sharp. Spring Valley gave more than 80% of its budget to missions during the 1940s and ’50s, and a tradition of generosity continues, as the church’s average attendance is now 30.

Of the $7,400 collected in October by Spring Valley, $5,000 went to support Amani and the remainder to Eden Life Church, a recent South Central Conference church plant serving people from Ethiopia in Kansas City, Mo.

Journey Mennonite Church, with multiple campuses in the Hutchinson, Kan., area, raised funds recently to buy 3,000 Bibles for distribution in Tanzania by the Bible Society of Tanzania. Journey expanded the program when staff learned Amani had only five Swahili Bibles for a church of more than 50 people. Journey’s gift of 54 Bibles for Amani came from none other than the Bible Society of Tanzania, and a service of thanksgiving was held Sept. 20.

The same day, Pleasant View Mennonite Church in Hydro, Okla., donated a 15-passenger van to the congregation, arriving just in time to pick up attendees for that morning’s worship service. The congregation also covered the vehicle’s first year of registration and insurance. — Anabaptist World

Pastoral ministry isn’t new to Wakibogo. He began serving in worship ministry as a 12-year-old in eastern DRC. When war pushed him to flee his homeland, the call continued as an urban refugee in Nairobi, Kenya, where he was a worship leader and assistant pastor at Makao House of Grace Church and visited refugees at Kakuma Camp.

After six and a half years in Kenya, his family arrived in Hesston, where the Wakibogo family was supported by Whitestone and Hesston Mennonite churches and West Zion Mennonite Church in Moundridge. Working with local churches, the Wakibogo family established a nonprofit organization, Anistemi Corp., to support churches in Kenya and the DRC helping orphans. A school was going to begin construction in August in Kenya, but COVID delayed those plans.

The Wakibogo family became members at Whitestone, and Masemo Wakibogo completed a Bible and ministry degree at Hesston College. The family launched Amani Community Church in December 2019 with Masemo as pastor and his wife, Salima Nyasinde, as an assistant to women’s ministry and worship leadership, worshiping in a rented space in Mount Vernon United Methodist Church.

South Central Conference’s Ministerial Commission approved Wakibogo’s license toward ordination on Feb. 28 and, after a COVID delay, a celebration service was held in August.

Wakibogo believes the church could grow to at least 80 or 100 attendees in 2021, but Amani’s rented space is only available at certain times and can’t accommodate larger groups for special events — especially with COVID precautions.

Beyond the shared struggle with a new culture and shifting from Swahili to English, most Amani attendees have similar refugee experiences in Africa.

“Every family has its own experiences and challenges,” Wakibogo said. “There are people born in camps who didn’t experience war. Others were born in Congo and experienced war, and the experience in each refugee camp is different in every country. It’s different in Rwanda or Uganda or Kenya or Zimbabwe or South Africa.”

Wakibogo said he puts a greater emphasis on worship music than other immigrant churches in Wichita. Amani is the only such church in the city with a choir posting videos to YouTube. Wakibogo plays multiple instruments and sings, which also sets him apart.

Amani is also set apart by relationships built on caring for others amid the pandemic. The church received $3,000 from a COVID relief fund developed by Everence, Mennonite Disaster Service and Mennonite Central Committee U.S. and used it to pay bills for families who lost jobs.

“You serve with your heart, and the community will see what you do,” Wakibogo said, recalling a man from a different church who became ill. “No one visited this guy, no one organized prayer. He was not working. He lost his father two months ago.

“So I went there not as a pastor, but as a member of the community, and I prayed for him. I gave him $50, and we came back. He cried because no one from his church visited him, and that made an impact. . . . If someone is in need and we are able to help, you help. If they need prayer, you pray. People will see what you do. People will see if this is a church or just a group of people.”