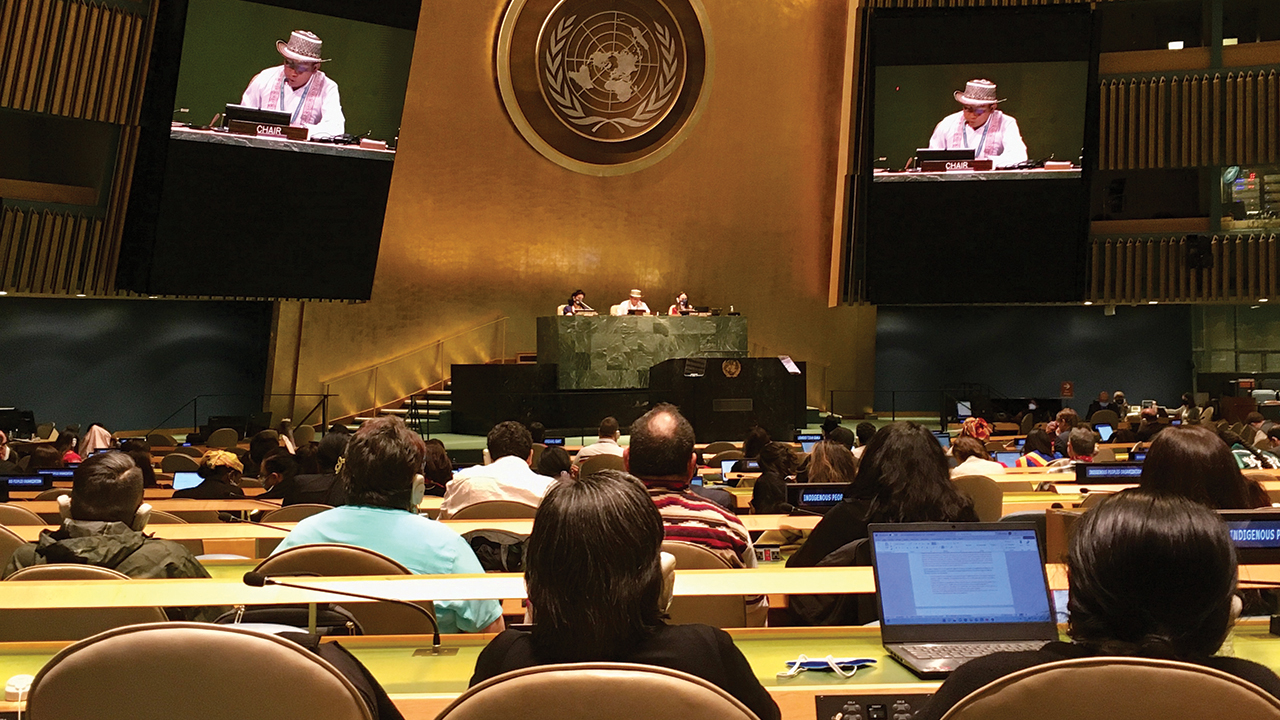 Darío José Mejía Montalvo, of the Zenú Peoples of San Andrés Sotavento, presides over the 21st session of the U.N. Permanent Forum on Indigenous Issues in New York. — Lars Åkerson

Four years into their partnership, the Dismantling the Doctrine of Discovery Coalition and Indigenous partner organization Ka’ Kuxtal Much Meyaj sent a joint delegation to the United Nations in April.

The coalition is a group of Anabaptists mobilizing the church to dismantle the Doctrine of Discovery, a concept used to justify seizing Indigenous lands and dominating Indigenous people.

The group met with other Indigenous organizations as well as Mennonite and ecumenical groups while attending the U.N. Permanent Forum on Indigenous Issues in New York. Representatives of the Maya organization, based in Mexico’s Yucatán Peninsula, addressed the forum to denounce violations of their rights.

A Maya representative cited abuses at the hands of the Mexican government and private actors that have left communities with contaminated water and depleted water access.

“Water is a sacred being,” she said. To the Maya, Water — which they capitalize as a proper noun — is indivisible from their people’s ancestral territory, in which God’s presence dwells and which gives them life.

In contrast, industrial agricultural practices and development projects like the Maya Train treat water and land as mere economic resources. These efforts, supported by the Mexican government, operate without the consent of the Maya people and infringe on the sanctity of their relationship with their ancestral territory.

The Permanent Forum was established in 2000 to offer counsel, raise awareness and coordinate activities at the United Nations relevant to Indigenous peoples. Some groups, including Mennonite Central Committee, joined this year’s session virtually.

The Permanent Forum provides Indigenous peoples a venue to dispute the narratives of governments and industries that claim to respect their rights while failing to do so. It is also an opportunity for organizing and building relationships with others facing similar challenges.

To mitigate ecological crises, climate science has long urged the abandonment of fossil fuels for energy generation. Indigenous representatives called for a just energy transition that does not perpetuate colonial economic models. This requires a transformation in the relations between communities.

This vision resonates with growing Mennonite attention to climate change and Anabaptist theological commit­ments to peace with justice, said Katerina Friesen, lead organizer of the Dismantling the Doctrine of Discovery Coalition. “Mennonite communities — and the global church — have the opportunity to repudiate the church’s role in colonization not only in word but in action,” she said.

Friesen, who participated in the delegation, sees the Mennonite coalition’s efforts as part of the transformation the Indigenous leaders advocate.

The Maya-Mennonite delegation was supported in part by a grant from the Mennonite Creation Care Network as well as by Manhattan Mennonite Fellowship, the New York Catholic Worker and MCC’s U.N. Office.

While in New York, the delegation spoke at the Catholic Worker and at Manhattan Mennonite Fellowship. The congregation recently joined the coalition’s Repair Network, which brings together Mennonite congregations committed to learning, healing and action to address the interwoven legacy of Christianity, colonization and white supremacy.

Both the Mennonite coalition and Ka’ Kuxtal Much Meyaj see their work on a generational scale. The dominant economic, political and theological systems have reigned for centuries. They say overturning supremacist structures and healing relationships requires a similar effort.