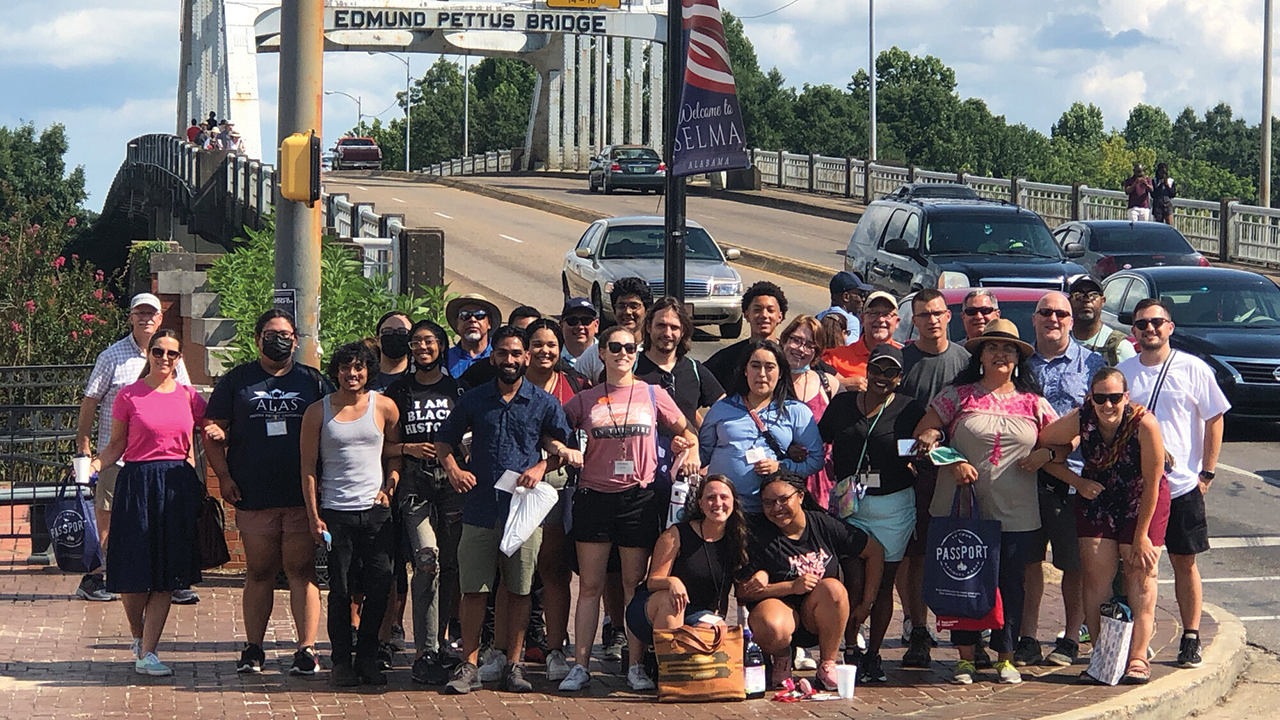 Participants in the Multicultural Peace Collaborative and U.S. Mennonite Brethren denominational leaders stand together in front of the Edmund Pettus Bridge in Selma, Ala., on July 23. The bridge was the site of Bloody Sunday on March 7, 1965, when more than 600 people marching for voting rights were confronted with violent attacks by state troopers. — Saji Oomen

A diverse group of 20 Mennonite Brethren youth and young adults gathered in Montgomery, Ala., in late July for a nine-day study of Christ’s peacemaking mandate, while studying the history of racism in the U.S.

Many did not know one another, and each participant came with a different background. Some came from urban centers of the West Coast and others from the rural hills of North Carolina. Some had lived all over the world; others were living in the small towns where they were born and raised. Many were students at higher education institutions.

Together, they agreed to learn from one another and build relationships across differences. By the end of the nine days, almost every participant named the group’s diversity as a strength of the experience.

The gathering, called the Multicultural Peace Collaborative, or MPC, was a partnership among Mennonite Central Committee U.S., West Coast MCC, the U.S. Conference of Mennonite Brethren Churches and Multiply, the MB mission agency.

It began with four days of learning while traveling through Montgomery and Selma, Ala., and Atlanta. For one day, the group overlapped with USMB denominational leaders who also had gathered to learn, lament and reconcile with the history of racism in the United States.

Participants walked the Edmund Pettus Bridge in Selma, where more than 600 civil rights marchers asking for voting rights were brutally attacked by state troopers on March 7, 1965.

After crossing the bridge both ways under the scorching sun and learning about the history of that Bloody Sunday, the MPC and denominational leaders joined together, in lament and hope, to share communion.

“Something happens to our body, our hearts and our minds when we are physically present together in the spaces of historical racial acts,” said Dina González-Piña, West Coast MCC executive director and a facilitator of the MPC. “It is from that space that we hear the blood crying out for justice and, as peacemakers, we cannot live as though we don’t hear and see the injustice.”

In Montgomery, the MPC spent a day at the Legacy Museum and the ­National Memorial for Peace and Justice. At both places, the representation of U.S. history offered opportunities for learning about the legacy of slavery, lynching, racial segregation and mass incarceration in the U.S.

The group ended their time with a worship service at Dexter Avenue King Memorial Baptist Church. Martin Luther King Jr. pastored at Dexter Avenue for six years and led much of Montgomery’s early civil rights activity from there. Montgomery was also the site of the famous 1956 Montgomery bus boycott, when Blacks walked instead of using the bus for more than a year to protest segregation on buses.

“Being in the actual spaces where the civil rights movement began and progressed was the most impactful aspect,” wrote Lauren Purvis of Fresno, Calif., in her evaluation. “I’ve learned about these events, but to travel to and sit within those spaces and buildings made it so real.”

After four days of hands-on learning, the MPC headed to North Carolina, where they spent the second half of the trip reflecting on what they had seen and experienced.

The MPC was the first event of its kind in the U.S. for USMB youth and young adults. Participants committed to implementing their learnings when they returned home, educating others and getting more involved in racial justice efforts.