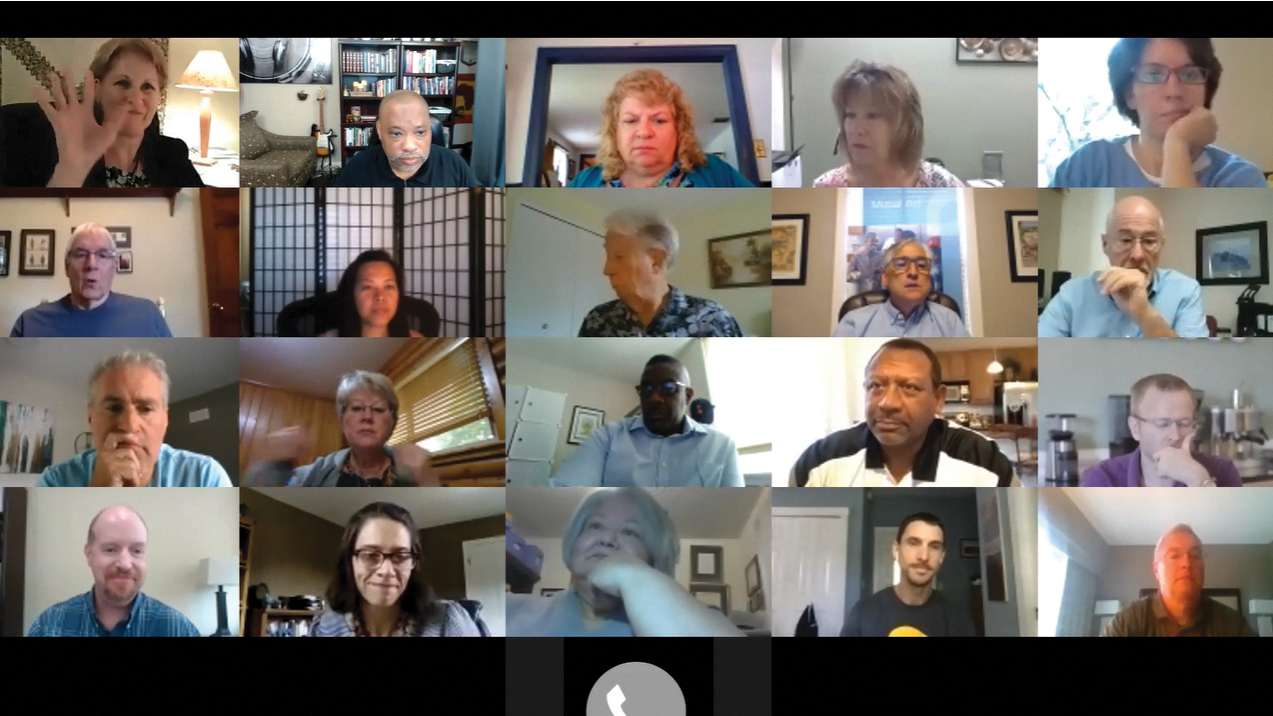 The Membership Guidelines, a source of conflict amid struggles over LGBTQ inclusion for nearly 20 years, may be up for a vote by Mennonite Church USA delegates next summer.

During a videoconference meeting Sept. 11-12, the MC USA Executive Board set in motion a process that could lead to a decision at the biennial convention in Cincinnati on whether to drop or keep the document.

The meeting was mostly closed to the public. A 15-minute segment when votes were taken was open to the public and the media.

According to a news release, the board heard that the denomination has reduced its budget deficit and “is in its strongest cash position in four years,” said Glen Guyton, MC USA executive director.

Other updates included work on racial reconciliation, a new denominational website and an introduction to MenoTicias, a new Spanish-language newsletter.

The Membership Guidelines maintain a definition of marriage between a man and woman and say pastors may not perform same-sex marriages.

An advisory group has recommended the guidelines be retired.

“Looking back over the past 20 years, it is clear to see that the Membership Guidelines have been a persistent source of confusion and contention, limiting our effectiveness as witnesses to God’s peace,” Guyton said.

The board “acknowledged MC USA’s inconsistent polity surrounding the Membership Guidelines, recognizing that it has resulted in much conflict, harm and pain in the denomination from its inception,” the news release stated.

Moderator Joy Sutter said, “We grieve this pain for our siblings in the church and pray for our continued discernment together as the family of God.”

The board responded to five recommendations from the Membership Guidelines Advisory Group.

First, the board approved an eight-step process for gathering input on a potential resolution for the delegate assembly.

The steps include getting input from the Constituency Leaders Council, an advisory group of church leaders scheduled to meet Oct. 16-17. Additional rounds of input will come from executive conference ministers and conference moderators. In January, the Executive Board will decide what to recommend to the delegates.

Retiring the guidelines would entail “doing the difficult work of being church together amid our differences when working at biblical discernment on disputable matters,” the news release stated.

Second, the board accepted the group’s advice that “any document or policy about LGBTQ people must include representatives of the LGBTQ community in its creation.” Guyton said marginalized groups must be part of any meaningful change process.

Third, the board agreed to consider approving/exploring the creation of an LGBTQ constituency group during the 2021-23 biennium.

Fourth, the board directed Executive Board staff to “develop a truth-and-reconciliation process with LGBTQ people.”

Fifth, the board agreed that “staff and churchwide agencies will not use sexual identity, gender orientation or marital status as criteria to restrict a person’s full participation in the ministries, activities, roles and committees of our denomination.”

The board noted that this is already standard practice at the denominational level and in MC USA agencies. Conferences and congregations are responsible for their own hiring practices and calling of leaders.

The process will also include reviewing the denomination’s bylaws and its “Shared Understanding of Ministerial Leadership” to clarify the relationship between documents and practices.

The Membership Guidelines Advisory Group met last November and released its recommendations in January. The board’s response to the recommendations was delayed due to cancellation of its April meeting amid the coronavirus pandemic.

On financial matters, the board heard that during the fiscal year that ended July 31, the budget deficit was much smaller than expected — $18,540 rather than the projected $134,919. Guyton attributed this to pandemic-related cost savings, such as reduced travel, coupled with successful fundraising. He said overall giving is up almost 33%, individual giving is up 70%, and contributions to the MC USA archives are up 90%.

Guyton noted a general fund balance of $2.6 million and operating cash for 186 days.

The board unanimously approved a budget for the fiscal year ending July 31, 2021, with a projected deficit of $46,000, acknowledging continued fiscal uncertainty.

Guyton presented an overview of the staff’s progress in meeting the goals of the Executive Board’s strategic plan for the fiscal year that ended July 31. The plan focused on equipping, empowering and resourcing members and practicing intercultural competency.

In addition to reducing the budget deficit, highlights included:

— Fostering intercultural competency through online resources, events and greater access to training for conferences and congregations.

— Providing a strong peace witness through antiracism and other social justice initiatives.

Some goals, such as plans for in-person events and church planting, were affected by COVID-19. Despite this, MC USA introduced the Thrive: Church Planting Grant in support of Mennonite Mission Network and conference church-planting efforts. Also in 2020, the first group of 24 students completed the Sent Network church-planter training program led by MMN.

“I believe leaders are born for times of crisis,” Guyton said, offering words of encouragement to the board, referencing Proverbs 17:17. “Scripture reminds us that times of adversity have the potential to bring us together.”

For insurrectionists, a violent faith brewed from nationalism, conspiracies and Jesus

How can we define God?

Alongside the streetwise Jesus