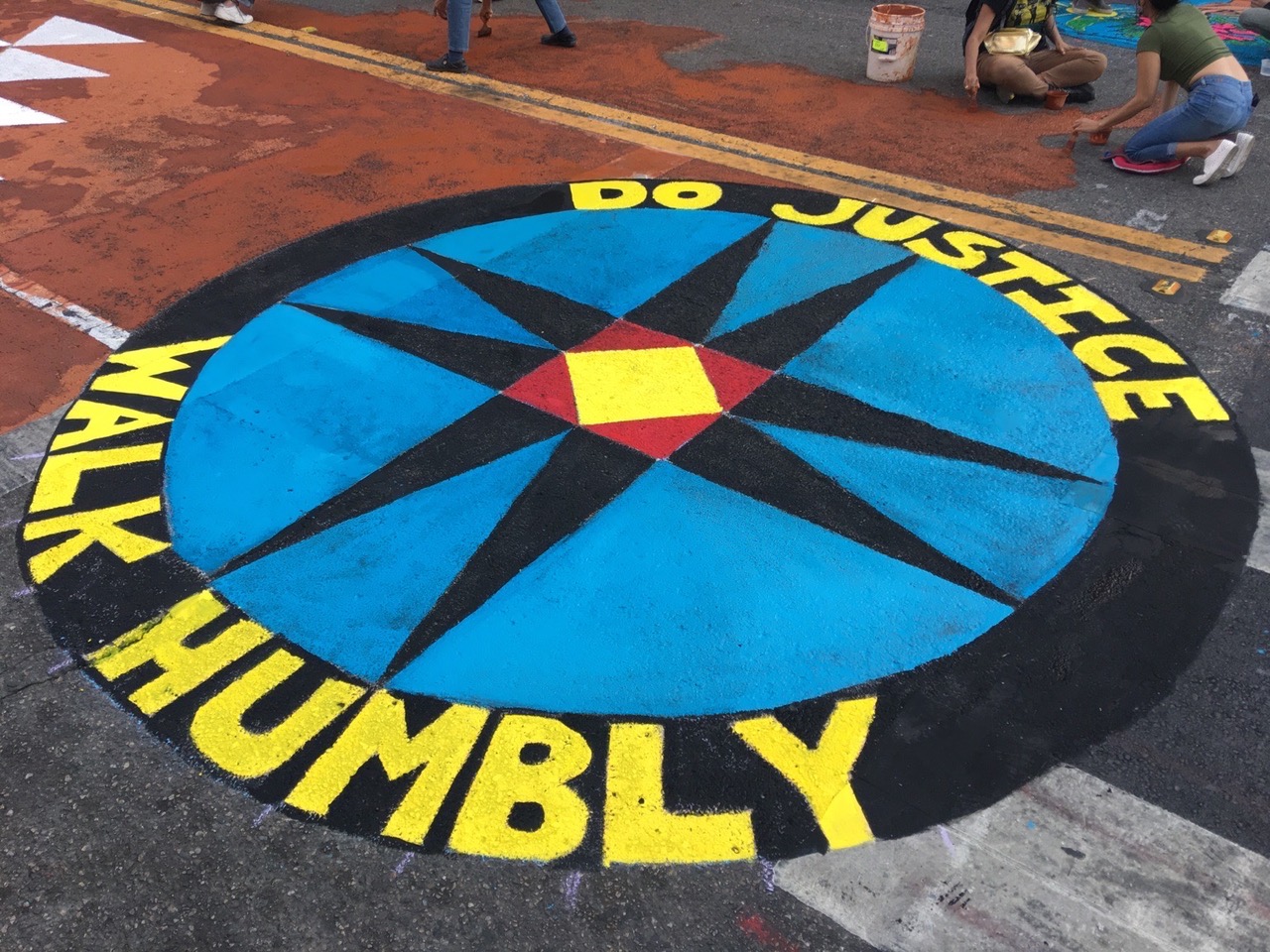 Artists from First Mennonite Church of San Francisco help create a street mural in late October. The church chose a quilt block design in part because quilt making has always been a collective and egalitarian activity, and the Amish eight-point star is similar to the Lakota star. Photo by Jesse Turner

In the week leading up to the 2020 U.S. presidential election, Mennonite Church USA asked a cross section of pastors across the country to share their concerns, community engagement activities and prayer requests. The pastors responded to the following questions:

“Several congregants have actively participated in Black Lives Matter protests since the murder of George Floyd,” he said. “Other congregants who live near where the marches and protests are taking place have been a very visible presence.”

According to Storbakken, Brooklyn Peace Center is holding open meditations for peace on evenings leading up to and following the election. He is part of the launch team for the center, a new community organization that aims to promote and embody peace in Brooklyn and beyond.

“Some of our congregants have expressed fear that, even if the current president does not win a second term, the damage done will continue to be felt for a long time,” he said. “Others are oriented toward hope and have expressed that this president is merely a symptom of deeper, systemic problems, of which this presidency only served to reveal how wounded this nation really is.”

Looking ahead, Storbakken is praying for the safety of those who live near places where riots or looting may occur, for the safety of protestors and that all actions will be peaceful, for those coping with unhealthy anxiety and stress, and for hope, increased faith and a deepening commitment to following the way of Jesus of Nazareth.

She noted that she and several others have taken Hold the Line Training.

“We’ve formed a Signal thread with churches across the country to share resources and updates on what’s happening on the ground in each of our areas,” she said.

Hold the Line, A Guide to Defending Democracy was written by Hardy Merriman, Ankur Asthana, Marium Navid and Kifah Shah, and is based on years of research into how non-violent citizen action made it possible to regain control of a democracy when a leader refused to cede power.

“It’s been helpful to have a sense of the ‘red lines’ we’re looking for and how we can organize in case of a power grab by the president,” she said.

Raleigh Mennonite Church is in a swing state in the South, in a racially divided area.

“There have been multiple instances of militia intimidation from Proud Boys and other white supremacist groups emboldened by the Trump administration,” Florer-Bixler said. “Taking a stand while also finding ways to de-escalate conflict will be a crucial part of the next two months.”

“In the past few months amid unrest in our city, especially in response to the tragic death of Daniel Prude, we have formed an antiracism committee and made efforts to follow the lead of local people of color, including the local organizations of Black Lives Matter, Teen Empowerment and Free the People ROC.

“As we approach the upcoming election, members have helped to spread awareness, assisted each other in delivering absentee ballots and shared resources available for people encountering obstacles on election day.

“We appreciate prayer as we continue to learn about, come to terms with our complicity and seek greater peace and equity regarding the high rates of segregation and racial disparities in our region.”

“A couple of members have been a part of a community effort to offer rides to people who may not otherwise be able to vote,” said Joel Miller, lead pastor at Columbus Mennonite Church. This is challenging because of the pandemic and the need for social distancing.

In addition, Miller will be volunteering at the polls on Election Day.

“I have been trained by an interfaith coalition to be a peacekeeper at the polls, a unique role for clergy and social workers alongside poll monitors,” he said. “The focus is on being present at polling locations in clergy garb, prepared for conflict prevention, de-escalation and harm reduction.

“People are concerned that hate groups, especially those promoting white supremacy and emboldened by the President’s rhetoric, will engage in violence.”

He acknowledged the church’s hopes and needs are similar to those of other congregations and communities.

“We pray for wisdom as we engage our family and neighbors in conversation, and courage to remain faithful to our best selves. We pray that we can be part of the healing and repair of our community and be good listeners to those most impacted by harms,” Miller said.

Lead pastor Jared Chase said Sharon Mennonite Church and other area congrgations have been focusing on teaching a Kingdom view, rather than a worldly view leading up to the election.

“We engaged in an ecumenical sermon series, entitled ‘The Ways of Jesus — Kingdom Culture in a Fractured World.’ The goal was to not focus on partisanship, but to make Kingdom-minded decisions,” he said.

Although he doesn’t anticipate overt violence, Chase said the congregation has a history of creating conflict and violence through social media.

“One very big concern that I share is, regardless of the outcome, our divide and inability to be in conversation with one another will only become more apparent,” he said.

He prays that the congregation and community “can overcome conflict and tendency to retreat and huddle with those we find like-minded and step into the tension of building relationships even with those we may disagree with.”

“Many members have voted by mail-in ballot or in-person early voting,” said Albuquerque Mennonite Church Pastor Erica Lea-Simka, who noted some in her congregation also have taken preemptive steps to educate themselves on effective, nonviolent, active resistance strategies in the case of a coup.

“Our fall focus has been and continues to be, ‘God is One, We are One,’” she said, “It’s an effort to recognize and respond to our interwoven relationships in faith, in the larger community and even globally.”

A small group has been drafting and soliciting feedback on guidelines for congregational engagement in politics and civics involvement.

Lea-Simka said concerns among the congregation vary and include fears of a presidential-level coup, uncertainty about the effectiveness of Congress and the Supreme Court in providing checks and balances on the Executive Branch, putting too much faith in empire government at the expense of faith in God’s kingdom/kin’dom and how to bring faith-based hope and civic engagement in balance. Albuquerque Mennonite Church seeks prayers for the impact of multiple stressors, such as the rise in COVID-19 cases, concern for congregants serving in healthcare and other helping roles, challenges of online schooling and uncertainty about the upcoming election.

“We need at least one of these crises to be under control to help ease the stress,” Lea-Simka said. “We know we aren’t alone, and we are thankful to have fantastic local ecumenical partners and sister congregations. My prayer for Albuquerque Mennonite is that we will look to the ‘cloud of witnesses’ [Hebrews 12:1] and the Holy Spirit to strengthen and comfort us.”

First Mennonite Church in San Francisco has a community engagement team, with members who are trained in various peacemaking skills.

“Our team works with other Bay Area teams coordinated by the East Point Peace Academy,” said Associate Pastor Joanna Lawrence Shenk. “We meet weekly to assess ways we can support the effort, since not everyone is able to show up in the streets. We also invite others in the congregation to get involved.”

According to Lawrence Shenk, congregants are concerned about ways to safely participate in the streets amid concerns about COVID-19, an onslaught of disinformation, potential violence surrounding the election and justice work that’s needed no matter who wins the election.

“Pray that we will know how to be of service to efforts beyond the Bay Area,” she said. “We want to be aware and mindful of how we can offer support to others who are in tenuous circumstances.”

Pasadena Mennonite Church is a member of LA Voice, a coalition of 57 diverse churches, synagogues and mosques representing more than 40,000 families in Los Angeles County.

“We believe that our strength and witness is best seen in solidarity,” said Timothy Reardon, minister of teaching and leadership. “And we plan to lean heavily into common acts of justice, peace and witness with our fellow LA Voice congregations.”

Others in the congregation are working with Black Lives Matter groups in Pasadena and that this work will continue beyond the election season.

“We long to be peacemakers,” he said, “and so our hope is that we might be agents of reconciliation, while advocating for justice.”

He asked for prayer for vision, direction and guidance as to where, how and with whom they can step up as disciples of Jesus in this tense time.

“Pray that we would be filled with and guided by God’s empowering Spirit to be vessels of God’s peace, justice and enemy love and that we may understand more fully what it means in this time of political turmoil to pick up our crosses and march behind the Messiah, who was executed by the state,” Reardon. said

“At Portland Mennonite Church, we have marched in the streets,” said Lead Pastor Rod Stafford. “We have supported the anti-racism work of community partners such as the NAACP, and we are currently working through an anti-racism curriculum as a congregation.

“In the run-up to the election, we have been talking on Sundays about the ways our commitment to follow Jesus shapes our public life. And we will pray for our community and for this country.”

Stafford noted Portland has been the site of many protests since the killing of George Floyd. While most have been peaceful and purposeful, he thinks some have been little more than distractive vandalism.

“It is hard to know what the election will bring, but the work we are called to do remains the same — do justice, love mercy, walk humbly together with God” (Micah 6:8).