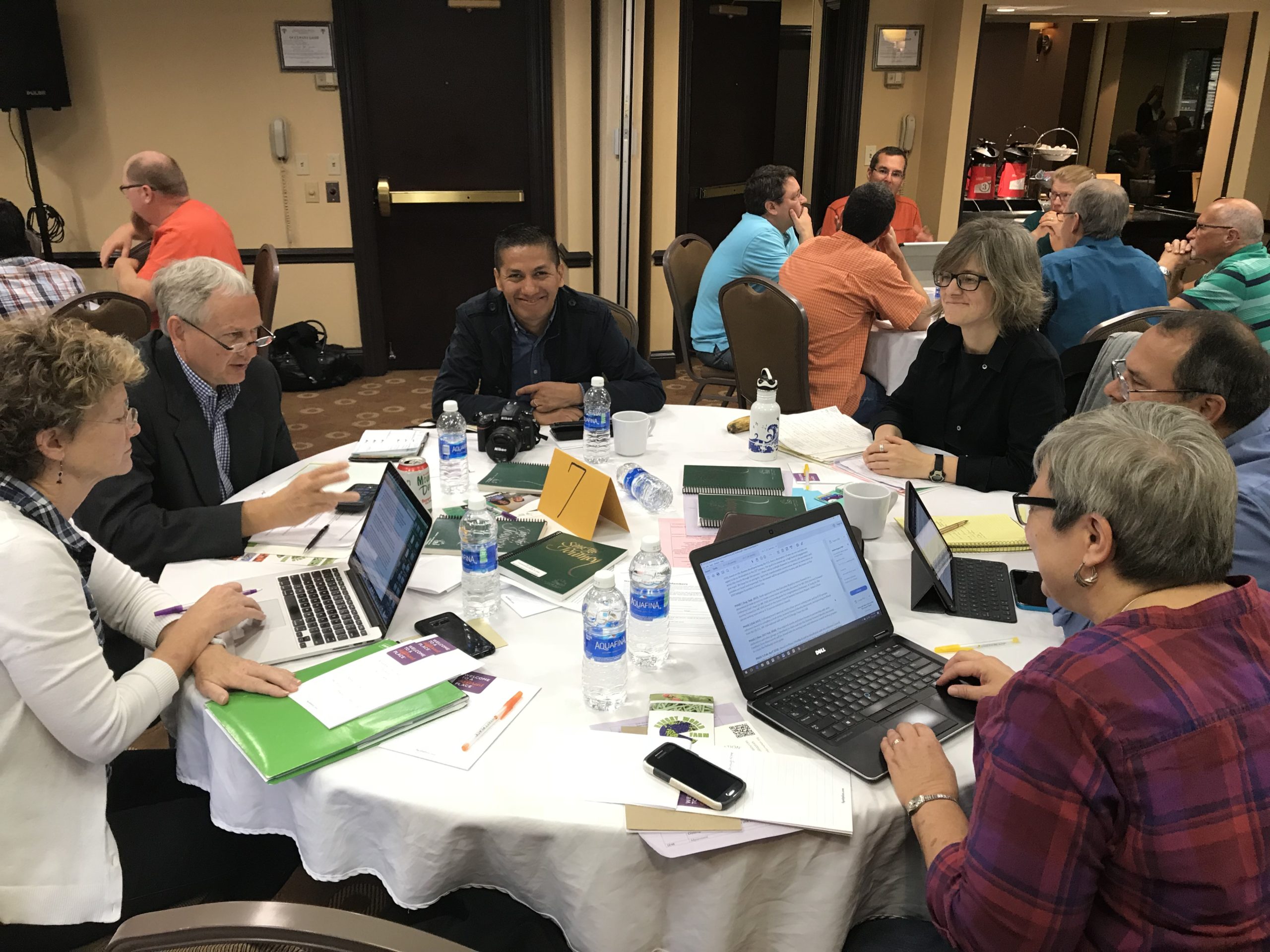 Three weeks after Mennonite Church USA’s Executive Board (EB) approved plans to implement the Journey Forward, a two-year process building on the outcomes generated by the Future Church Summit process at the Orlando convention in July, the Constituency Leaders’ Council (CLC) of MC USA spent considerable time processing the plan and offering feedback.

“Together we gather as people whose journeys are always beginning,” said Shannon Dycus, pastor of First Mennonite Church in Indianapolis and worship leader for CLC. “We gather together with hope, the kind of hope that pulses on through uncertainty.” After reading and reflecting on the story of Lazurus’ resurrection (John 11), CLC leaders participated in a Communion service.

Around 60 leaders from area conferences, constituency groups and agencies met during the CLC’s first meeting of the biennium Oct. 19-21 at the Hyatt Place Hotel in Kansas City, Missouri.

The group spent the bulk of its time offering feedback on the three core values proposed to guide the Journey Forward process: “Grounded in the whole story of Jesus, transformed by the Holy Spirit in community and empowered to join in God’s reconciling work.”

They also discussed the process itself, which will include six phases resulting in an updated Journey Forward document to be processed by the denomination’s Delegate Assembly at its 2019 meeting.

Throughout the meetings, a Journey Forward Synthesis Team, took notes on feedback received from the

In its final report, the team noted that CLC members broadly affirmed the core values as a positive way to “address the common need for understanding” across the denomination. The team also reported that for the process to work there will need to be continued work at trust-building and questions of where authority and power lie in the denomination and equitable access will need to be addressed going forward.

“Conferences and congregations will still need to decide what to do with the information [from the Journey Forward process],” the group reported. “We need further clarity about decision making.”

Following the synthesis team’s report, individuals had time to respond. People raised concerns that the process still did not address the diversity of theological opinions present in the denomination regarding inclusion of LGBTQ individuals in leadership roles and the performing of same-sex wedding ceremonies.

Pitts, reporting from her table, said, “While we affirm the Journey Forward process and are excited about denomination-wide study, its overly optimistic to think this will resolve our conflicts around human sexuality. This will be seen as evasive by some.”

“I want MC USA to clearly state whether we adhere to the Confession of Faith or not,” said Lupe Aguilar, pastor from Brownsville, Texas, and South Central Mennonite Conference. “Many conservative conferences have left, and we have less and less of a voice. Those of us that think this way should raise our voices and be heard.”

Reporting for his table, Pastor Beny Krisbianto of Franconia Mennonite Conference said, “Our fear is that after several years of process we still aren’t going anywhere. How much and how long are we going to be in the process?”

Sandra Montes Martinez, pastor and Iglesia Menonita Hispana moderator, Dallas, Texas, encouraged MC USA staff to utilize leaders of color as they design the process and communicate with people of color across the denomination. “We all understand English, but we speak different languages,” she said. “Utilize us to help communicate!”

“A federation of conferences”

During his executive director’s report, Stutzman also invited CLC members to give feedback to the idea

In his report to the CLC, Stutzman wrote, “We would do well to make any necessary changes that could help to clear up any ‘sticking points’ or a lack of clarity in the way we function as MC USA.”

Stutzman suggested the possibility of writing covenants between the Executive Board and each area conference that might help clarify relationships, roles and authority.

CLC members also heard a report from Willard Metzger, executive director of Mennonite Church Canada, who reported on that denomination’s recent vote to pursue a dramatic structure change that places regional church bodies at the center of the church’s structure.

CLC members had time to process this information and offer feedback on current structures and their hopes for the future. Reporting from table groups, members offered a variety of feedback, ranging from concerns about the political nature of the word “federation” to affirmation for exploring creating covenants.

Sandy Miller, Mennonite Mission Network Director of Church Relations, reported for her table, saying, “What could this mean? Churches that have left often wanted decisions from the top. Can we find a way or a structure to help us live out forbearance and understand church as both purity and unity?”

The search for a new executive director continues

Joy Sutter, moderator-elect and chair of the search committee for the next executive director of Mennonite Church USA, gave an update on the committee’s process. The group meets weekly via video conferencing, already meeting more than 14 times to help develop the search process and solicit feedback.

denomination. At its close, the survey had received 737 responses in English and five in Spanish, and more than 225 unique individuals had been recommended for the role.

Drawing on feedback from the survey and interviews with church leaders, Sutter named the highest qualities desired in a new ED: a commitment to Christ and the Anabaptist faith, ability to initiate or lead change and an ability to “connect with everyone.” The group also identified four summary themes for the new individual’s leadership: conflict manager, committed to the tradition, a change agent and competence.

“We ask for your continued prayers for the person God is calling to this position,” said Sutter. “The work we are doing is spiritual discernment.”

On Oct. 20, CLC members could choose whether to attend a session led by Mennonite Mission Network staff on resourcing for church planting or a session exploring the recent proposal from a Mennonite Education Agency task force about changes to the relationships between higher education institutions and the denomination.

On Oct. 21, CLC members participated in a two-hour learning session on immigration issues in the

United States. Tammy Alexander, senior legislative associate for Mennonite Central Committee U.S. in Washington, D.C., Lupe Aguilar, and Shana Peachey Boshart, conference minister for Christian formation in Central Plains Mennonite Conference, reported on the current state of immigration laws in the United States and ways their conferences and congregations have been engaged and have supported undocumented immigrants in the United States.

“Conferences need to start asking, how [much] do you want to get involved?” said Ramiro Hernandez, Hispanic ministries coordinator for Central Plains. “It’s time to start thinking about being prepared to help undocumented workers.”

CLC participants to consider a visit to South Texas to learn more about the situation at the border and the ways churches are responding.

To close the meeting, Dycus read from the Beatitudes (Matthew 5:1-12) and invited participants to offer

one another a “dirt blessing,” using soil from Kansas City and from the Mount of Beatitudes.

“It’s important that we recognize that we have done some walking, we have a ways to travel farther and we’ve gotten a little dirty. That is blessing,” she said. “Even more important, we are on a journey with Jesus. Our story began a long time ago in a story that we continue to tell everywhere we go.”