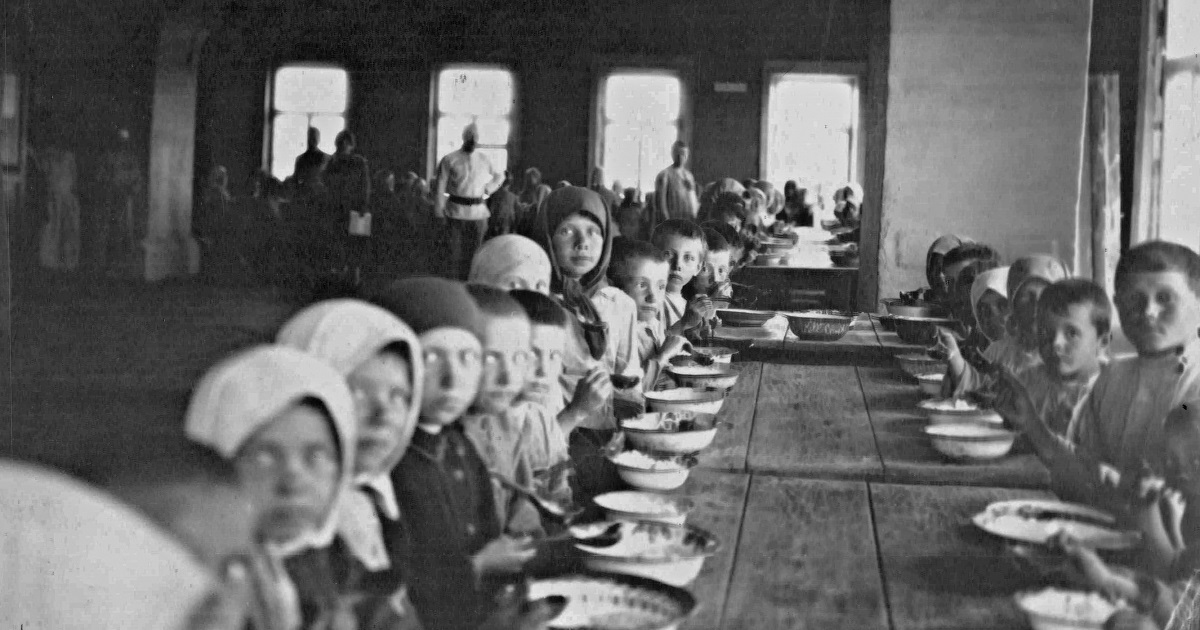 Editor’s note: This is the first in a series of five columns written by J Ron Byler, Mennonite Central Committee U.S. executive director, to mark 100 years of MCC sharing God’s love and compassion for all.

A hundred years ago, war, disease and hunger were raging in southern Russia (present-day Ukraine). Mennonites there wrote to their sisters and brothers in the United States and Canada: “Dear Brethren, help us, we are perishing.”

It took three tries to get food into the region. A.J. Miller, one of the first Mennonite Central Committee (MCC) volunteers, described the scene that greeted him at the Zaporizhzhia train station: “The moment the train halted it was besieged by living skeletons … muttering the one sentence that was being wailed despairingly by millions in Russia … Bread, in God’s name, bread!”

By June 1922, Mennonites were serving 25,000 people in dozens of villages in southern Russia with meals of bread daily, cocoa twice weekly, beans once or twice weekly and rice or corn-grits the rest of the time. Last June, when the MCC U.S. and MCC Canada boards visited Zaporizhzhia, we marked the occasion with a similar meal and read aloud from letters and accounts of that time.

“You saved us from starvation,” survivors from one village wrote. “More than half the population is getting its food from you,” another village reported.

That included Mennonites but also Lutherans, Catholics, Jews and others—a life-saving effort that was only possible because of the outpouring of gifts from churches and people across the United States and Canada.

“It came almost miraculously from far away America, from friends they had never seen or known, from someone who wished them well,” Miller wrote about some of the first relief to arrive. “It was Love reaching out its strong hands across the water and plains, across oceans and continents.”

This was the formation of MCC. Today, MCC continues to share God’s love and compassion, still bringing together a broad coalition of Anabaptists and other like-minded folks to respond to people in need with ministries of disaster relief, sustainable community development and justice and peacebuilding in more than 50 countries.

As I reflect on our 100 years of shared ministry—and as I think of where MCC is heading as it continues to seek the most effective ways to serve—a visit I made several years ago to Karamoja, Uganda, comes to mind.

Decades of armed conflict in the country, as well as drought and widespread hunger, resulted in massive suffering. MCC, working with Diocesan Community Development Services of the Church of Uganda, supported a conservation agriculture program to help communities rebuild sources for food and water.

We saw that farmer groups grew kitchen gardens with plentiful harvests. Several sand dams had improved the water supply. And a savings and loan program helped families invest and save for the future.

All of these programs were supported by MCC, and when I visited the community, several hundred people greeted us to celebrate the harvest and to share their stories.

Bishop James Nasak of the North Karamoja Diocese of the Church of Uganda told us that only a decade before the youth would have been involved in armed conflict.

Instead, one community member shared that the savings and loan program helped him buy two goats that contribute to the well-being of his family. Another described how a simple sand dam gives the community access to water in the dry season. Enough water for everyone means cattle raids are fewer and peace has come to the community.

MCC’s initial outpouring of emergency assistance in the 1920s has grown into a holistic ministry with hundreds of projects in development and peacebuilding. But relief efforts—providing food, water and housing to people in need—remain a strong part of MCC’s ministry on behalf of churches.

In Uganda, for instance, community members tell of how MCC canned meat arrived in a time when children and the elderly were dying for lack of food. The meat, an elder told us, was like medicine that helped revive them. The community is now flourishing, and life has replaced death.

Since 1946, when MCC’s meat canning program began, more than 21 million cans of meat have been sent to dozens of countries around the world.

In a typical year, 30,000 volunteers in 34 locations in the United States and Canada chop, fill, weigh and label every one of 600,000 cans of meat to send to communities in need in places like Haiti, Ethiopia and the Democratic People’s Republic of Korea (North Korea).

That’s just the start. Volunteers give their time to stitch and knot comforters and to shop for and pack collections of items such as relief kits and school kits. It’s an effort that adds up: In the last four decades, more than 2 million comforters have been distributed through MCC.

Responding to people in crisis because of war in Syria and Iraq has been MCC’s largest relief response since World War II. I visited Syria two years ago and met with a number of MCC’s partners.

In the village of Ayo, Syria, less than 10 miles from the front lines between government forces and the opposing militant groups, we entered a room filled with displaced people. They told us about villages destroyed. All these families received food boxes from MCC through the Syrian Orthodox Church.

In a Greek Orthodox church in nearby Krabou, Syria, we joined another circle of displaced people, who told of kidnappings and shellings, of food and housing shortages. And we heard how this Christian village has embraced Muslims as well as Christians fleeing the violence.

In Hama, Syria, we heard more stories and then shared a meal—mounds of rice and chicken, eaten heartily by all. The rice and chicken were like the two loaves and fishes that Jesus broke for the crowd. Now, as then, hearts and stomachs were filled.

In the nine years since war began in Syria, MCC has provided the comforters, relief supplies and other items that churches in Syria need to reach out to their neighbors. And through those supplies, we together offer something more precious. “You have suffered with us and rejoiced with us,” Rev. Ibrahim Nseir of the National Presbyterian Church of Aleppo told me. “And your presence with us today is a sign of hope that God is not far from us.”

This is the work you make possible. Thank you. With each gift of money, of time, of prayer, you are reaching out your hands, joining in a legacy that reaches back in time, through borders and into villages, farms, and cities across the globe.

Through MCC and the generosity of supporters like you, love is still reaching out its hands across oceans and continents, as MCC works through church and other partners to share God’s love and compassion in the name of Christ.

Today, more than 70 million people have fled their homes because of persecution, war, violence and disaster. As Jesus did in the Gospel stories, we continue to feed those who are hungry. Jesus tells us that when we do so, it is as if we are feeding Jesus himself.

May this ministry of the churches through MCC grow and flourish for another 100 years.