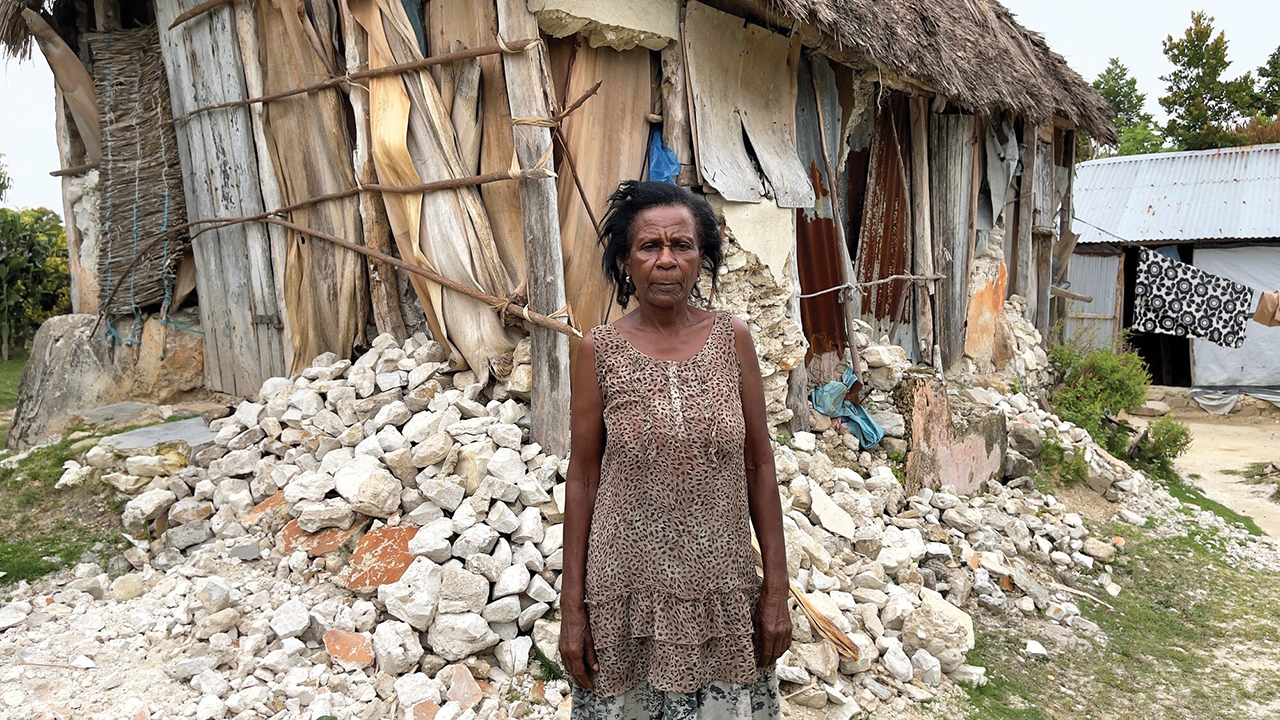 Prescione Roger stands in front of her home, which was destroyed by an earthquake in Saint-Jean-de-Sud, Haiti. — Paul Shetler Fast/MCC

Boxes of canned meat and relief kits from Mennonite Central Committee brought joy and relief to people struggling to recover from the Aug. 14 earthquake that devastated the southern peninsula of Haiti.

The supplies were the first to reach Saint-Jean-du-Sud, a southwestern municipality made up of several towns, on Aug. 31, more than two weeks after the 7.2-magnitude earthquake occurred. Two thousand people died. It destroyed homes and buildings, leaving 650,000 people in need of emergency assistance.

Relief organizations, including MCC, struggled to get supplies to people, because the main road to the south was unsafe. Gang activity and robbery of supply trucks, as well as tropical storm Grace, which came three days after the earthquake, kept trucks grounded.

Gradually, police were able to establish more security on the road, so two members of MCC’s assessment team drove to Saint-Jean-du-Sud on Aug. 29 to help set up for the distribution.

The distribution unfolded smoothly, Fast said, because MCC’s partner AVOREDES was organized and prepared. Fifty families received a relief kit and 12 cans of meat, the maximum the aircraft could hold.

AVOREDES chose recipients whose homes were damaged or destroyed and were especially vulnerable in other ways. They included pregnant women, people with disabilities and families headed by elderly people or single women. About half were members of Mennonite churches in the area. The churches are part of Assemblée de la Grâce, a member of Mennonite World Conference.

AVOREDES, the Creole acronym for Association for the Reform and Development of Saint-Jean-du-Sud, is associated with Assemblée de la Grâce.

Shetler Fast said everyone mentioned a neighbor or family member facing hard times whom they would share cans with.

Their generosity and compassion sustained them before help arrived.

“Everywhere you look, people are ­doing what they can to rebuild, patching houses that can be patched,” Shetler Fast said. “Neighbors have been letting neighbors stay in their house, especially when it rains.”

Otherwise, those without safe housing sleep outside.

MCC intends to send two more shipments to this area in the next couple of weeks. The assessment team is evaluating longer-term needs.

The area is still recovering from Hurricane Matthew, which caused much devastation in 2016, said Shetler Fast. People remember how MCC helped them rebuild their livelihoods then and are asking for similar assistance this time.

The earthquake caused market women to lose goods stored at market and in their homes. This year’s crops, which would be used to pay school fees, are gone. Farmland is destroyed. Churches, houses, roadways, bridges and schools are damaged.

Conde Guevara said MCC will work with another partner, SOFA, the Creole acronym for Solidarity of Haitian Women. Its work is focused on preventing gender-based violence.

In the midst of a disaster, women are more vulnerable to abuse. Conde Guevara expects MCC’s support of SOFA’s abuse prevention and psychological and social support to increase.

SOFA staff in Beaumount report more than 300 houses were damaged and destroyed in addition to livelihoods, gardens and livestock. MCC is sending meat and relief kits there too.