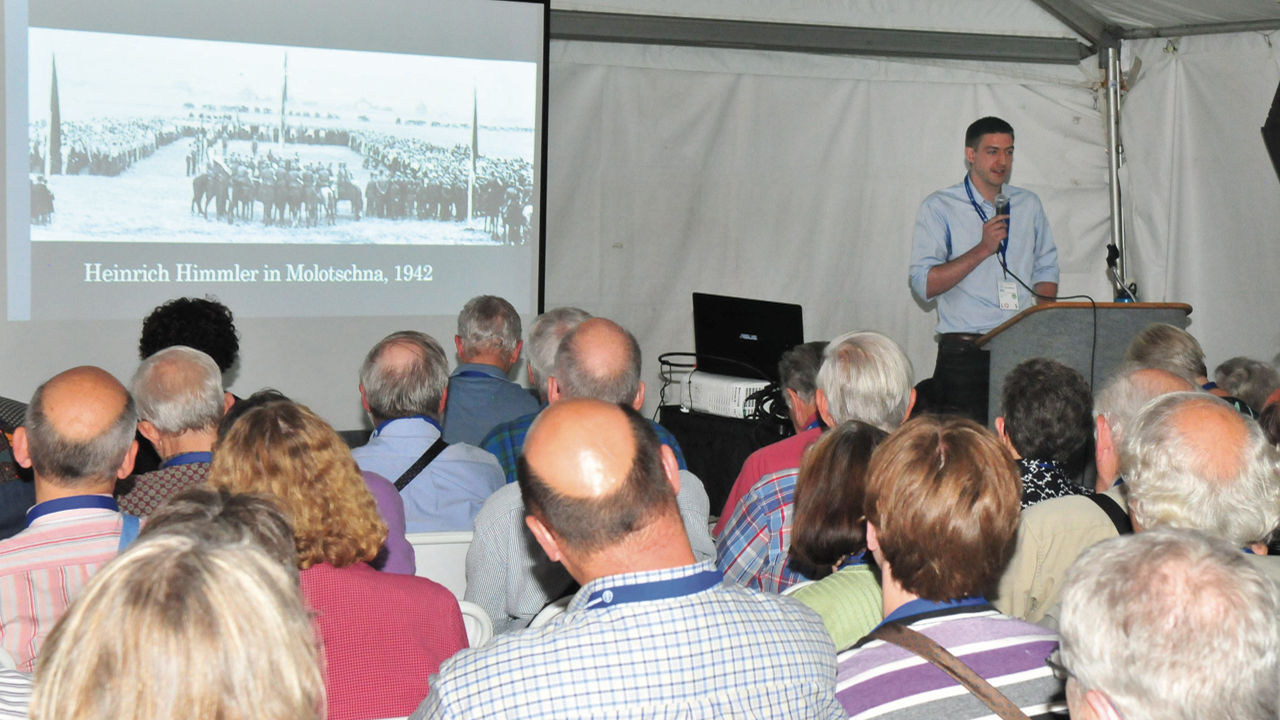 Historian Ben Goossen shows a photo, “Heinrich Himmler in Molotschna, 1942,” during his workshop, “From Aryanism to Multiculturalism: Mennonite Ethnicity and German Nationalism, 1871 to Today” at the 2015 Mennonite World Conference Assembly in Harrisburg, Pa. — Dale D. Gehman for Meetinghouse

Mennonite Central Committee has asked a group of 11 historians from five countries to do research into its involvement in sheltering Nazis and their supporters following the Second World War.

The research will explore and report about the time when the organization was resettling Mennonite refugees from the Soviet Union.

The historians will build on past research into Mennonite involvement with Nazism, “and bring their individual scholarly specializations to bear in examining actions MCC and staff undertook during this period,” MCC said in a statement.

It will also examine actions MCC and MCC staff undertook and “how they wrote about those actions, so that we can discern potential next steps.”

According to Ann Graber Hershberger, executive director of MCC U.S., MCC “is committed to developing a deeper understanding of this part of our history, and to reckoning with it once the research is complete.”

But the organization, he added, has “nothing to hide. We are eager to see what the researchers come up with. We want to have a fair and full reckoning with our history.”

He is also aware the findings could have a detrimental effect on MCC, given its strong reputation for peace, humanitarianism and social justice.

“I’m not worried about harm to MCC’s reputation,” he said. “Jesus said ‘The truth will set you free.’ We won’t lose by having a deeper understanding of our own history. We want to understand and own it.”

He went on to state that MCC “is clear that it repudiates anti-Semitism” today.

“I think it is excellent that MCC is examining this subject,” she said. “An honest look at it is important.”

Jarniewski expects the information will be difficult to hear for MCC and members of the Mennonite community, but she believes it will be helpful for everyone when “past wrongs” are openly acknowledged.

She also hopes the research will result in a “good dialogue and useful conversation” between Mennonite and Jewish communities.

Aileen Friesen teaches history at the University of Winnipeg and is one of the scholars invited by MCC to research its postwar past.

“MCC did a lot of good work at that time” helping Mennonites escape to the west, said Friesen, who specializes in researching Mennonite collaboration with the Nazis in Russia.

But along with the legitimate refugees “there were perpetrators among them,” she said.

This doesn’t negate the “good work” MCC did back then, but it “is a historical fact that needs to be addressed to have a more honest portrait of what happened.”

Winnipeg documentary maker Andrew Wall also welcomes the research. For Wall, who produced Paper Nazis, a documentary about support by Mennonites and others for National Socialism in Manitoba before the war, “this is something we have to talk about . . . it’s really important to have this discussion.”

The story is also “complicated,” he said, adding he hopes all the good work MCC has done in the last 100 years won’t be tarred by a “broad brush.”

The results of the research will be presented in September at an “MCC at 100” conference scheduled to be held in Winnipeg. It will also be published in the fall 2021 edition of MCC’s Intersections journal.