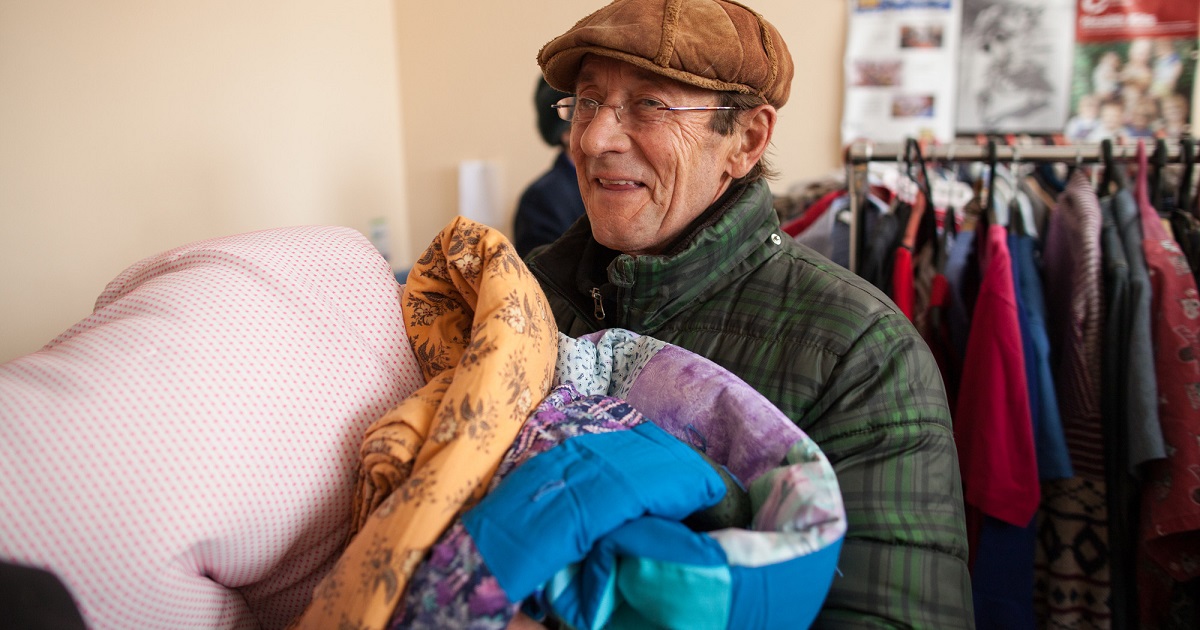 Ukraine is an MCC country of sensitivity. While this photo has been vetted and may be used without further checking, please consult the MCCcontent and vetting policy guidelineswhen communicating about countries of sensitivity in general.

Photo: Aleksandr Dmitriyenko holds MCC comforters he received in Zhytomyr, Ukraine, during a distribution to people displaced by violence in the eastern part of the country. MCC photo/Colin Vandenberg

Mennonite Central Committee (MCC) will kick off its 100-year anniversary celebration in 2020 by bringing together volunteers in the United States, Canada and Europe to make 6,500 comforters in one day.

The Jan. 18 event—The Great Winter Warm-up—will jump start MCC’s supply of comforters that are sent to people in crisis all around the world each year. In 2018, MCC distributed more than 53,000 comforters.

MCC was founded in 1920 when groups of Mennonites and Mennonite Brethren formed a committee to provide food and other assistance to people affected by war and famine in southern Russia, which is present-day Ukraine.

On the day of the Great Winter Warm-up, volunteers are invited to help make comforters at any of the national events listed at mcc.org/centennial/great-winter-warm. Sewing groups and individuals are welcome to participate at home or other locations.

Participants will work together to combine handmade comforter tops, warm batting and sturdy backing fabric into comforters. In most locations, the squares of fabric that make up the comforter tops have already been sewn together, so volunteers will primarily knot the layers together.

“People who get these comforters realize they are getting something personal. Someone has chosen the fabric and crafted each one with their hands,” Byler says. “They understand this is a gift of love.”

In recent years, comforters have brought warmth to people in Syria, Iraq, Jordan and Lebanon who have lost family members, jobs and homes because of the war in Syria and other violence in the region. In Malawi, comforters were given to people whose homes were flooded and to refugees from neighboring countries.

A.J. Miller, an MCC worker at the time, said the supplies appeared “almost miraculously … from friends they had never seen or known, from someone who wished them well. It was love reaching out its strong hands across the waters and the plains, across oceans and continents.”

Kathy Fast of Winnipeg, Manitoba, a former MCC representative, experienced the joy comforters can bring when she helped distribute comforters to an HIV support group in Zambia.

“One (woman) was so excited when she received her blanket,” Fast says, “that she took me by both hands and swung me onto her back, and did a little jig, ululating [trilling] and intermittently calling for her son to ‘come and see.’ My feet dangled off the ground throughout the dance. It was one of those moments one does not forget.”

Individuals can make comforters throughout the year, using instructions at mcc.org/comforters or by joining other volunteers at any MCC material resources center.