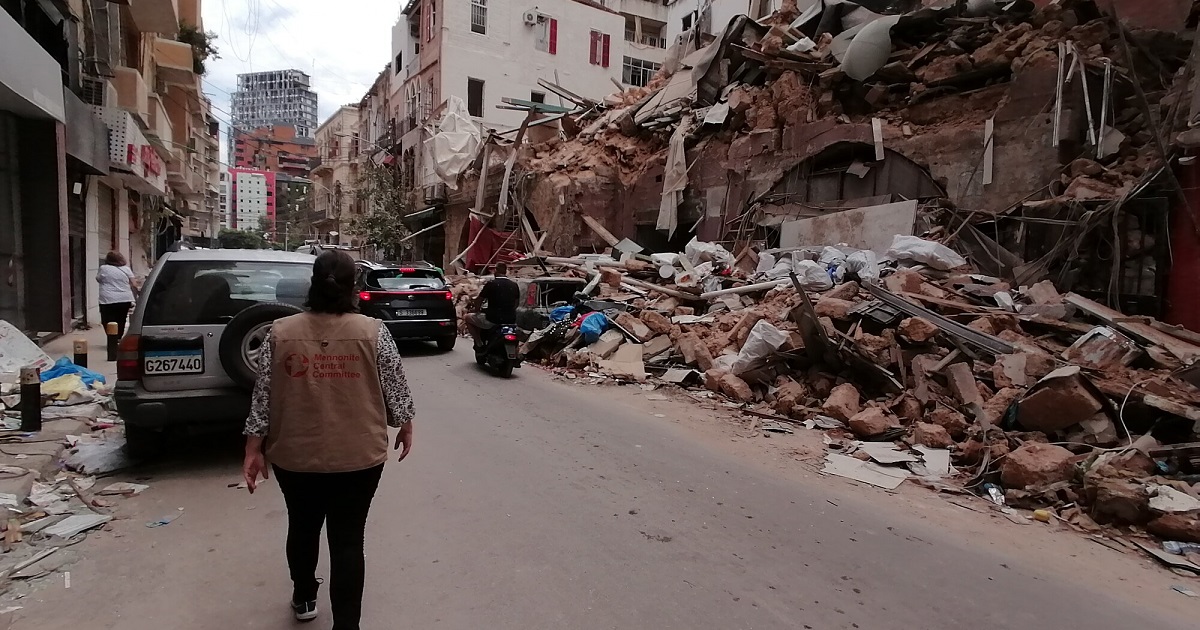 Kate Mayhew, MCC representative for Lebanon, Syria and Iraq, walks through the hard-hit neighborhood of Gemmayze as part of an assessment that will help determine if and how MCC would conduct an emergency response in this neighborhood.

Photo: Kate Mayhew, MCC representative for Lebanon, Syria and Iraq, walks through the hard-hit neighborhood of Gemmayze in Beirut, Lebanon. MCC photo/Garry Mayhew Garry and Kate Mayhew were cleaning up after dinner in their Beirut, Lebanon, apartment when they felt the ground shake just before they heard the boom, so loud and so powerful it threw them to the floor. The Mayhews and their daughters, 6 and 4, who had been watching TV in another room, took shelter in the bathroom, an interior room, away from what was happening outside. According to Lebanese government authorities, the explosion was caused by improperly stored ammonium nitrate at the city’s port. The power of the chemical compound, used to make fertilizer and explosives, caused destruction throughout Beirut. After the Mayhews’ children were reassured and calm, Garry and Kate, who are representatives for Mennonite Central Committee (MCC) in Lebanon, Syria and Iraq, contacted the other four staff members in Beirut. They were safe but shaken. One had a leg injury from flying glass and some had been in the midst of the chaos, seeing people blown off their motorcycles by the blast, hearing the screaming car alarms and cries of the people, and escaping the destruction near the port. Most of the staff stayed at the Mayhews’ house for the night, drawing strength from each other. Over the next few days, as the staff examined their apartments, saw images on social media, helped with cleanup and spoke with people who live close to the port, the magnitude of the damage became clear. The port that used to be full of ships and warehouses, including grain towers holding 15,000 metric tons of grain, was destroyed. Nearby high-rise offices and apartments, restaurants and shops were severely damaged. In neighborhoods nearest the port, concrete walls in multistory buildings were blown out, crushing the cars on the streets below. Glass covered the city and many people needed medical treatment. The government estimates that 300,000 people are without homes, 5,000 to 7,000 have been injured and at least 220 people have died. Some are still missing. “The needs are massive,” Garry Mayhew said, “from getting plastic on the windows and making repairs to the houses. COVID-19 is an even bigger risk than it was because so many people are gathering in the streets. People need hygiene. People need water, psychosocial care, reconstruction.” People in Lebanon were already struggling with an existing political and economic crisis before the explosion. The value of the Lebanese lira has decreased by 85% since October, and about 50% of the population lives below the poverty line. Beirut had not had much public electricity for a month before the explosion. In the Karantina neighborhood of Beirut, which is east of the port and home to many people living in poverty, Kate Mayhew and a staff person from MCC’s partner Popular Aid for Relief and Development (PARD) asked people to describe what was destroyed. “One person just looked at us and said, ‘I have nothing. So I have nothing to get destroyed,’ ” Kate Mayhew said. But in the buildings where they live, the structural damage is significant. Syrian refugees, who have immigrated to Lebanon during the nine-year war in their home country, are living in Karantina among Palestinian refugees and Lebanese families. Many of these families were on the brink of survival before the economic crisis raised prices and COVID-19 limited their ability to work. With the destruction of Lebanon’s primary port and granaries, food shortages are expected to become a major problem. MCC is responding by providing food for the most vulnerable people in Karantina in partnership with PARD. The two organizations have worked together throughout the Syrian refugee crisis to support education and provide food and psychosocial care for Syrian and Palestinian refugees and vulnerable Lebanese. “We do a lot with food already, so we are well positioned to scale up our program to meet food needs,” said Garry Mayhew. MCC is using funds from its account at Canadian Foodgrains Bank to maximize its food response. Numerous organizations distributed food immediately after the explosion, but MCC will address the need that will still be there when they are gone, Garry Mayhew said. MCC will supply food over the next nine months after identifying households that are most in need. MCC also will partner with PARD to provide psychosocial support for children, helping them to deal with yet another trauma. “Everyone’s dealing with trauma,” said Garry Mayhew, “including ourselves, our kids.” He’s encouraged by MCC’s partners who quickly responded in the heart of the crisis – setting up mobile clinics and helping with cleanup. Many young people have been on the streets, helping people with their needs. “It just gives us so much hope.” Donations can be made at mcc.org/beirut-response.