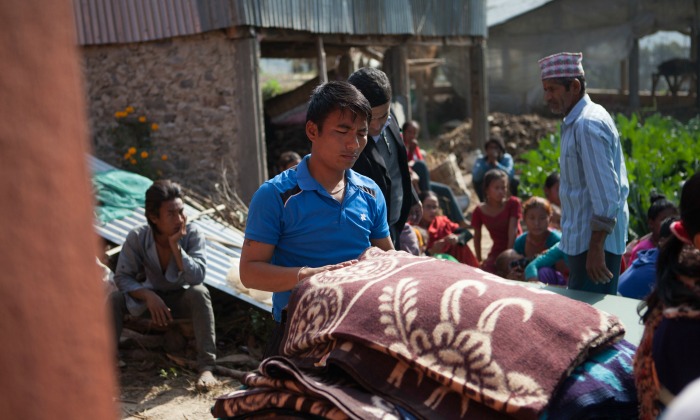 On April 25, 2015, when an earthquake rocked his village in Nepal, Sudarshan Chepang and his family huddled inside their home as it collapsed around them. After the shaking subsided, all that remained was rubble. They gathered what they could, mostly utensils, and fled outside.

Nine months later, Chepang, his wife and their two young children are still living in a temporary shelter made of salvaged materials, tarps and sheet metal. They have already endured the monsoon season, when moisture seeped in and spoiled food and bedding in some homes.

Now that it’s winter, when temperatures dip into the 30s and 40s, he’s worried about what comes next.
“We know it will be cold. But where else can we go?” Chepang said. “This is the only place that we have because we cannot build a new house yet.”

Mennonite Central Committee (MCC) is assisting families such as the Chepangs, as they await government support for construction of new homes. In December 2015, blankets, mattresses, plastic sheeting, tarps and jackets were distributed to about 30 households in Bhasbhase, in Nepal’s Dhading District.

“This is very welcome, especially for our children,” said Chepang. “Now we have blankets and they will be warm.”

The distribution was done through Sansthagat Bikas Sanjal (Sanjal), an MCC partner in Nepal that works with several local organizations.

More than 30 districts across Nepal are still struggling with the impact of the 7.8 magnitude earthquake,

as well as a second quake a few weeks later. More than 8,200 people died and more than 488,000 homes were affected. Toilets and drinking water systems were heavily damaged.

In Dhading District, 59 percent of homes were totally damaged and 25 percent were partially damaged.
While the government of Nepal is promising financial support for people whose homes were destroyed, rebuilding efforts have been hampered by an ongoing political crisis and a critical fuel shortage.

“We are worried about the impact of this on hygiene, especially for children,” Yonzon said. “As their immune systems are weakened by the cold, they can be more susceptible to pneumonia.”

Since mid-December, MCC and its partners have provided about 1,280 households with materials such as blankets and winter jackets in the multiple districts.

Ultimately the goal of the Nepal government, MCC and people without homes is to have permanent housing ready or underway before the next monsoon season in May. Working alongside local partners, MCC plans to support the most vulnerable people in four districts by helping them access government rebuilding funds.

MCC also hopes to support the training of masons and carpenters to work on new housing. And MCC would build model homes as examples of how earthquake resistant housing should be done, eventually donating the homes to families chosen by the community.

Yonzon said as MCC works with partners in several communities, she’s impressed with the resiliency of the Nepali people.

“Through earthquakes and fuel blockades, they still get up each morning and do what they can to earn an income, take care of their children and deal with a situation that is not ideal,” Yonzon said. “I hope that we can help them as they work together to rebuild their lives.”