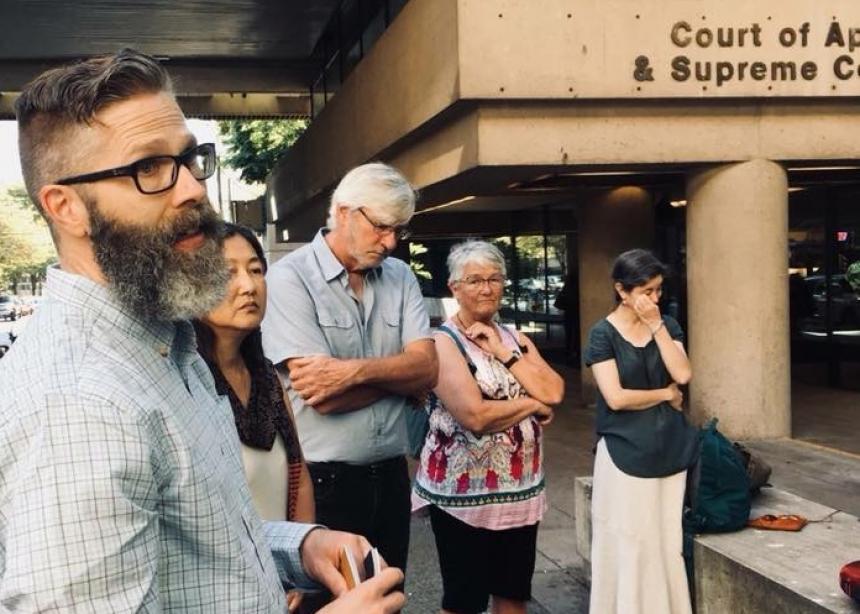 Photo: Steve Heinrichs and supporters gather for prayer outside the courthouse in Vancouver, British Columbia, during his two-day trial on Aug. 7 and 8. Photo by Brad Leitch.

Steve Heinrichs was found guilty of criminal and civil contempt of court in the Supreme Court of British Columbia in Vancouver on Aug. 8 and was sentenced to seven days in provincial jail. He was immediately taken into custody and transferred to the North Fraser Institute in Coquitlam to serve his sentence. According to a post on Heinrichs’s Facebook page, he was released from jail on Aug. 12.

Heinrichs, director of Indigenous-Settler Relations for Mennonite Church Canada, pleaded not guilty on Aug. 7 to the charge laid as a result of his solidarity action on April 20 in Burnaby, British Columbia, with the Tsleil-Waututh land defenders, who are resisting the expansion of Kinder Morgan’s Trans Mountain pipeline. (That action, he wrote in his “Burnaby Mountain Prayer Witness” document, “effectively blocked construction at the site for the day,” which led to his arrest.) Heinrichs read a statement in court, explaining the motivations for his action and how, in his mind, it was not in contempt of court or “the rule of law” but in defense of fundamental Indigenous human rights.

“I chose to act because at the center of the Christian faith lies the conviction that the Creator suffers with the oppressed, that God takes sides with the victims over against the dominant powers and that the people who see the issues of our day most clearly are those pushed to the sociopolitical margins,” Heinrichs told the judge.

After hearing the evidence presented by the Crown (government) and listening to Heinrichs’s statement, the judge concluded that to break the law is not a privilege afforded to those who appeal to a higher call in protesting matters of social injustice. There are many other legal options available to those wishing to express their disagreement, the judge determined.

Several fellow Mennonites appeared in court to support Heinrichs, among them Willard Metzger, executive director of MC Canada; MC B.C. executive minister Garry Janzen; and Henry Krause, chair of MC B.C. Service, Peace and Justice Committee, who also took part in the April 20 protest and who counselled Heinrichs to “be numbered among those arrested” on April 20, according to Heinrichs in his “Prayer Witness” document.

In a statement to Canadian Mennonite, Metzger said that while the MC Canada Joint Council was not aware of Heinrichs’ plan to join the protest prior to the event, he did approve of Heinrichs’ participation based on the following:

At the time of the arrest, Heinrichs had urged his fellow Mennonites to stand with Indigenous peoples when he said, “Take courageous steps. God’s inviting us into a conversation of faithfulness.”

Despite the possibility of arrest, Metzger said that neither he nor Heinrichs understood it as a probability at the time. Because Metzger, as executive director, approved Heinrichs’ participation in the protest, expenses of that participation are considered MC Canada expenses, said Metzger. Heinrichs’ time during the trial and while in jail are considered
personal time, at Heinrichs’ request.

There is no MC Canada policy regarding staff participation in civil disobedience, but the Joint Council is reviewing the process of decision-making and may consider the development of a policy after further discernment.

While some churches and congregants oppose Heinrichs’ actions and question whether he should continue to represent MC Canada as Indigenous-Settler Relations director, he has also received many comments of support, including from his boss.

“This action has prompted important conversations and debates within our nationwide family of faith,” said Metzger. “This was a very thoughtful and prayerful action in keeping with the mandate of the Indigenous-Settler Relations department and an expression of the resolution passed by delegates in Saskatoon [in 2016] that rejected the Doctrine of Discovery. It is also in support of the United Nations Declaration on the Rights of Indigenous Peoples.”

This article originally appeared at canadianmennonite.org.