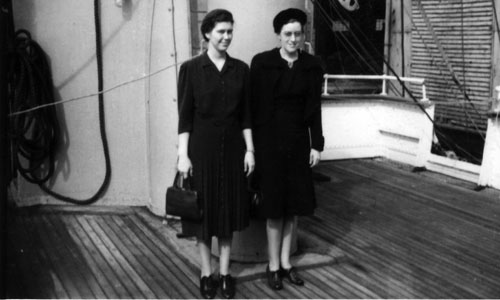 Lois Mary Gunden was honored posthumously on Jan. 27 at the Israeli embassy in Washington, D.C., as Righteous Among the Nations in the first such official ceremony held in the United States. President Barack Obama spoke at the ceremony.

niece and the person who first contacted Yad Vashem, Israel’s official memorial to the Jewish victims of the Holocaust. “We all appreciated having Lois in the family, but we really didn’t know very much about this part of her life, so to be able to find out more about what she did at a very young age—she was only 26 when she went to France—and then to have her honored not only by Yad Vashem, but spoken of in such generous terms by President Obama, was an extraordinary experience.”

During World War II, as a Mennonite Central Committee (MCC) worker in a French Mediterranean town far from her home in Goshen, Ind., Gunden risked her own safety by helping save the lives of Jewish children during the Holocaust. During a time when child refugees were being deported to concentration camps, Gunden and her Quaker co-worker, Mary Elmes, were able to shield children by moving them out of the relief agencies’ homes and camps to group homes, private homes and Catholic convents, monasteries and schools that would give them shelter. In addition, they were prominent advocates for the rights of individual children and more humane treatment for all.

Yad Vashem recognized Gunden as Righteous Among the Nations in 2013, after one of the children she helped, Ginette (Drucker) Kalish from Paris, formally nominated her for the honor. Gunden is only the fourth American (of more than 24,800 people throughout the world) to be recognized with this prestigious honor.

According to Yad Vashem’s account, Kalish’s father was taken to Auschwitz in July 1942. Kalish and her mother sought shelter in France, but were captured on a train. Gunden approached the family and offered to take 12-year-old Kalish out of the camp to keep her safe.

In January 1943, after the Germans occupied France, Gunden was detained by the Germans. She was released in 1944 in a prisoner exchange.

Twenty-one members of the Gunden family attended the event, along with representatives of the Kalish family.

Mary Jean Gunden, of Moraga, California, accepted the award on behalf of the family. In her remarks, she said, “Lois refused an offer by the Resistance to leave France and avoid German detention. She, a pacifist, would not risk physical danger to those helping her, nor others that might be harmed in retaliation. This young woman, not much older than the children she strove to save, is truly an American hero.”

For more about her life and her experiences in France, you can read the cover story by Mary Jean Gunden in the September 2013 issue of The Mennonite.