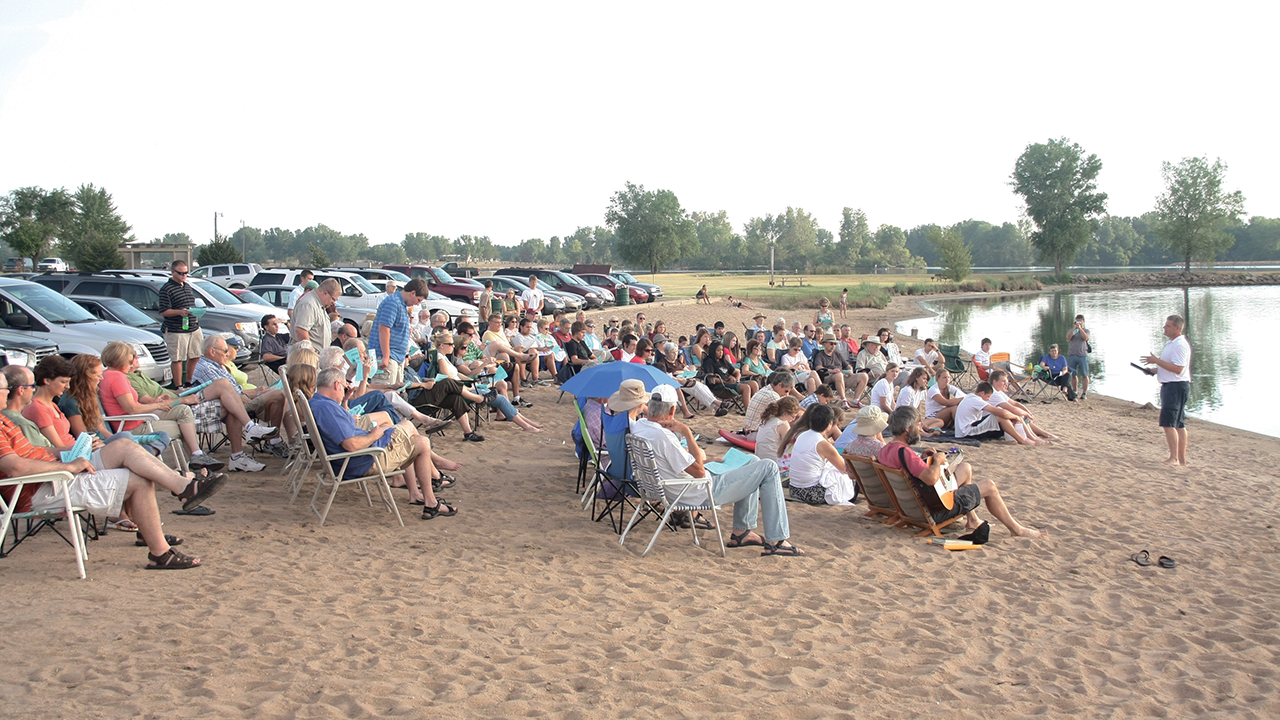 Members of First Mennonite Church in Newton, Kan., gathered at East Lake for a baptism service in 2011. — Rod Wedel

Forty-two years ago at First Mennonite Church in Newton, Kan., baptism was something you did in church. You really couldn’t ask for a nicer setting. Banks of stained-glass windows turned the sunlight vibrant blues and reds.

But the sanctuary windows weren’t the only source of striking color on that summer Sunday in 1979. My ­powder-blue suit was just the right style for a 15-year-old on a formal occasion.

Today, First Mennonite’s teenagers wouldn’t want to get baptized by pouring in the sanctuary any more than they would like to don ’70s polyester. Getting dunked in the lake east of town or the river at Camp Mennoscah is the way to go.

(A Mennonite Brethren friend, whose denomination practices immersion, says with a wink that he’s glad the Mennonite Church USA folks have finally decided to do it right.)

No matter the setting, mode or candidate’s garb, we believe the Holy Spirit is present.

“Baptism with the Holy Spirit is a sign of the renewing and quickening power of God in the believer’s life,” says the study guide to the Confession of Faith in a Mennonite Perspective, used by MC USA and Mennonite Church Canada.

I love the study guide writers’ old-fashioned use of “quicken”: to give life. In addition to a symbolic cleansing, baptism represents an infusion of the Spirit’s life-giving power.

Note the words: A symbolic cleansing that represents an infusion.

Yes, baptism is a symbol. But is it merely a symbol?

Yes, baptism is for those who are old enough to fully understand what it means to solemnly vow to follow Christ and to share the joys and sorrows of a community of believers.

But does one who was baptized as an infant (like the majority of the world’s Christians) have to be baptized again in order to be an Anabaptist (which, after all, means “rebaptizer”)?

These are some of the questions that make baptism a current topic of special interest among Anabaptists around the world.

The first question — “Is baptism merely a symbol?” — points to one thing Mennonite theologians learned in a dialogue on baptism with Catholics and Lutherans from 2012 to 2017.

During webinars sponsored by Mennonite World Conference on June 6 and 13, three leaders — Larry Miller, a Mennonite representative on the ecumenical dialogue group; and John D. Roth and Tom Yoder Neufeld, members of MWC’s Faith and Life Commission — reported on the “trilateral conversation.”

Miller, a former general secretary of MWC, said he gained appreciation for the Catholic and Lutheran emphasis on God’s act of grace. Baptism is about what God initiates as well as what humans choose. The challenge for Anabaptists is not to let the human response overshadow God’s role.

Miller said members of the Catholic and Lutheran delegations were “deeply pained” by Mennonite rejection of their infant baptisms because this implied a rejection of their understanding of God’s gracious action in the sacrament of baptism.

The Mennonite delegation affirmed their own convictions while learning from others. They were willing to consider the truth that might be found in moving beyond a rigid insistence that baptism is merely a symbol.

I heard a good explanation of this broader understanding of baptism in a talk by Brian Brewer of Baylor University during a conference at Bethel College in 2010.

Brewer noted that the 16th-century Anabaptists rejected the belief that the sacraments transmit God’s grace — for example, that the act of baptism itself confers salvation.

It’s often assumed that the alternative is to consider the sacraments (which Mennonites call ordinances) merely symbolic. This was what some of the other Protestant reformers did.

But Brewer said the early Anabaptists didn’t devalue the rituals that way, and neither should we.

He credited John D. Roth with this explanation: After attending a wedding, we don’t say, “That was a nice symbolic ritual.” We believe something real has happened. Something has changed. A newly married couple has a new identity. They are different than they were before.

Similarly with baptism: The believer has made a covenant with God. It is meant to be a life-changing promise.

Baptism gains deeper meaning when it is not only stripped of miraculous power — which, as the founders of the free-church tradition, the Anabaptists were the first to do — but also understood as a mystical union of divine initiative and human agency that transcends symbolism.

Contemporary questions about baptism include how it relates to church membership and whether to require people who were baptized as infants to be rebaptized.

The first Anabaptists considered rebaptism so important they risked their lives to do it. Among Anabaptists today there is a range of practice. The Canadian Conference of Mennonite Brethren Churches lately took up the question. Delegates approved a revised article on baptism in their Confession of Faith during their National Assembly, held remotely June 10-12.

The changes are subtle but important. In an interview, Andrew Dyck, a member of the denomination’s National Faith and Life Team, said they are intended to emphasize God’s work in connection with baptism (similar to what the Mennonite, Catholic and Lutheran scholars discussed), the essential connection of baptism to being part of a church (because churches have developed diverse membership practices) and the understanding of baptism as the beginning of the Christian life (not just for those who have overcome sins).

On the topic of rebaptism, Dyck said, the revision tweaks the wording but doesn’t change the practice: If a person was baptized as an infant, rebaptism is still required for church membership. The revision softens the language a bit by saying the church “invites” a second baptism. Of course, it is possible to be an active participant without becoming a member.

The revision maintains the tradition of specifying immersion as the MB mode of baptism. It adds a more invitational tone by recognizing other forms with more enthusiasm: It now says the local church “joyfully welcomes” those baptized in other ways, rather than simply that congregations “may receive” them.

During the MWC webinars, which drew about 100 people from dozens of countries on each of the two Sundays, participants shared how diverse cultures impact beliefs and practices.

In Latin America, where many converts previously were Catholic, the typical practice is to rebaptize. In MC USA, many are willing to accept members who transfer from infant-baptiz­ing churches on their confession of faith alone, especially when the person has a longstanding faith commitment. (“Does your infant baptism have ongoing spiritual significance for you?” might be a good question for a pastor to ask.)

In the webinars — part of MWC’s multiyear series of “Renewal” events leading up to the 500th anniversary of Anabaptism in 2025 — participants glimpsed the different contexts of the global church.

A Canadian told of growing up in a small town with two Mennonite churches that did not worship together, primarily because they practiced different modes of baptism. This seemed like idolatry.

In North American churchgoing families, baptism is an act of conformity. Teenagers know what their parents want.

For others it is a costly decision to break with tradition. In India, changing one’s religion and getting baptized can result in separation from one’s previous identity. When a Hindu becomes a Christian, the convert might ask: Must all Hindu cultural identity be rejected?

In some parts of the world, Anabaptists and other Christians feel a keen sense of supernatural power at work, not only in baptism but in all of life. A webinar participant from Ethiopia said that after baptism “there’s always the expectation that you will encounter the Holy Spirit, maybe speak in tongues.”

In cultures that haven’t been de­mystified by modernity, believers feel the power and gifts of the Holy Spirit more vividly. Western Christians can learn from them to recover a transcendent faith — one that envisions heaven opened and the Spirit descending like a dove, as Luke 3:21 describes happening at Jesus’ baptism.

Symbol and reality, divine and human action, vow of discipleship and witness of salvation — the full meaning of baptism may elude even the theologians. The MWC Faith and Life Commission hopes to get many more of us involved. It is preparing a study guide and planning regional gatherings in North America to help us engage with the work of the Mennonite, Catholic and Lutheran scholars.

The theologians found a key point of agreement among their traditions, which once condemned each other as heretical: Baptism is for discipleship.

Larry Miller noted that Catholics and Lutherans urge their people to “remember your baptism.” Those of us who were baptized as believers can do this literally as well as figuratively, and the more often, the better.