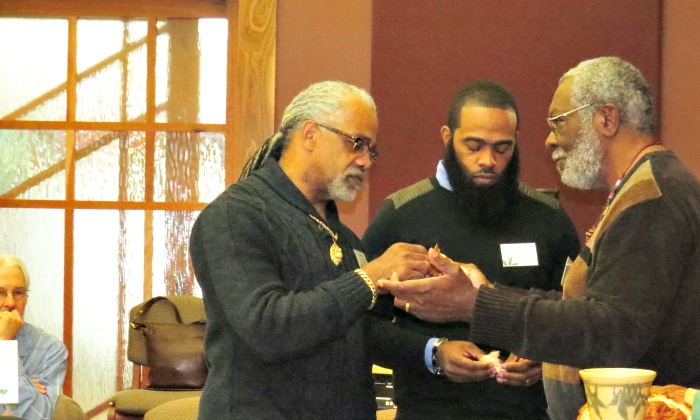 Al Motley, and his son, Alvin Motley II receive communion from John Powell at the African American Mennonite Pastors Gathering. The father and son are bishop and youth pastor respectively at The Way Thru Christ Community Fellowship in Townsend, Dela.

Photo: Al Motley, and his son, Alvin Motley II receive communion from John Powell at the African American Mennonite Pastors Gathering in Elkhart, Ind. The father and son are bishop and youth pastor respectively at The Way Thru Christ Community Fellowship in Townsend, Dela. Photo provided.

The two-day “African American Mennonite Pastors Gathering” was organized by Mission Network in partnership with AMBS and the African American Mennonite Association (AAMA). Guided by the theme “… That They May Be One” from John 17:21-22, the event offered an opportunity for Black leaders to learn of the variety of Mennonite Church USA agencies and resources available to empower them in their ministries.

Stanley W. Green, executive director of Mission Network, said the key point of the gathering was to connect and empower leaders and to also listen and learn from them, as they also learn from each other.

“I hope this is a beginning … that there will be many more opportunities like this to expand the circles of those who gather around this vision of reconciliation and renewed hope,” Green said.

Mission Network sent invitations to 33 congregations with Black leaders in Indiana, Michigan, Illinois, Missouri, Iowa, Ohio, Pennsylvania and Virginia. Not all, but many of them were AAMA congregations.

There are 51 AAMA congregations.

The leaders were told about the global and North American service programs offered by Mission Network, the various degree opportunities at AMBS, and heard from representatives of Everence, MennoMedia, The Mennonite, Mennonite Educational Association, and Anabaptist Disabilities Network. They were encouraged to connect with the resources. They also toured Mennonite Church USA’s offices and the AMBS campus.

Many of the leaders said the first day’s evening sermon in the AMBS Sermon on the Mount Chapel by Bishop Leslie Francisco III, of AAMA and pastor of Calvary Community Church (known as “C3”) in Hampton, Virginia, resonated with them.

Francisco shared his personal journey of pain and faith in ministry from inheriting the church from his father, the late Leslie Francisco II. The elder Francisco became a member of the Mennonite Church through an urban mission outreach by White Mennonites in Newport News, Virginia. The White members planted the church, but left when the elder Francisco (who was part Black and Native American) became a leader, Francisco said.

Francisco shared that he told his father that he would “never be a pastor” in part because of the pain he watched his father endure while pastoring the small, struggling Newport News church, and the church in neighboring Hampton that would become C3.

Despite resisting, and enduring his own struggles as a young husband and father, Francisco eventually obeyed God.

Now, C3 has about 1,200 members, an elementary school, and has also planted four churches, including one in South Africa.

“My father was a man of faith. I learned how to trust God by watching my father,” Francisco said, adding that he is passing the same legacy to his three daughters, two of whom are directly involved in the C3 ministry.

Other event highlights were the table discussions in which leaders and agency representatives shared their own personal stories. Discussions sparked conversations ranging from how to grow their ministries, to addressing problems in their communities, and overcoming racism in the church.

John Powell, who retired from Mission Network and has worked for decades on racial reconciliation in and outside of the Mennonite Church, drew laughter when he said that he had hoped such a gathering would happen “before I died, but I don’t plan on dying anytime soon.”

He said that many of the Black congregations planted by White churches had been neglected over the years.

“There are new congregations, but there were some here that were church plants that had White pastors and so forth that are still struggling …” Powell said. “It’s [the gathering] fantastic.”

George Taylor, a lay leader at Schaumberg (Illinois) Christ Community Mennonite Church, said he knew a little bit about the offerings at Mission Network and some of the other agencies, but that the gathering provided him with a broader and deeper perspective.

“I felt more of a connection with more African American Mennonites, and seeing the work that is being done at this high level, gives me hope that the same intensity is going to trickle down to the churches as well,” Taylor said.

Cyneatha Millsaps, pastor of Community Mennonite Church in Markham, Illinois, and an AMBS graduate, said that she was a little disappointed that more pastors did not attend, but was definitely glad that she did.

“I’m thinking they’ve got to take the show on the road,” Millsaps said of the event planning team. “It might be instead of trying to have us come to them that they have a small delegation that comes to us and maybe regionally gather us in our own little cities … I’m happy that they are listening and want to hear our voices at the tables.”

Tyrone Taylor, assistant associate pastor of New Foundation United in Christ Fellowship in Elkhart, said that he was unaware of the resources at Mission Network and other agencies, and had not had much contact with other Black Mennonite leaders.

“We assume that just because of the color of our skin we know each other … we don’t communicate as well as others may think,” Taylor said. “The thing that really stuck out is that they talked about how some [in the church] are scared to speak out about this (racism and reconciliation). You have to have a place to inhabit this type of atmosphere where you feel free to speak or to share your emotions with others and your questions or your doubts.”

Taylor’s wife, Deaconess Tantra Taylor, said that she is going to apply the knowledge learned at the gathering and share it with other Black leaders.

“I think we need to initiate it a little more on letting people know that the help is out there for the churches,” she said. “This is just a start … I can see it really flourishing if they continue to make it bigger.”

The racially and ethnically diverse ensemble travels to various Mennonite churches to worship musically. Work in Progress has become an instrument for bridging the racial divide. The ensemble visited C3 in November 2014, and Jacobs talked with Francisco about connecting with African American Mennonite leaders, including those that are not part of AAMA.

“The outcome of this event is much more than we could’ve ever planned … the entire Church Relations staff worked on this,” Jacobs said. “In our mind, when we do things like this, we want the house full. But the people that are here are the people that were supposed to be here, and we’re grateful for that.”

Through discussions with leaders while traveling to churches, Jacobs said she discovered that Mission Network and other agencies needed to reach out more to Black leaders and give them an opportunity to respond. She said the multi-agency support for the gathering shows the agencies are committed.

Jacobs said that she will process the suggestions given to her by these leaders. She said a logical next step is to take the gathering to the east coast where many of the Black Mennonite leaders are.