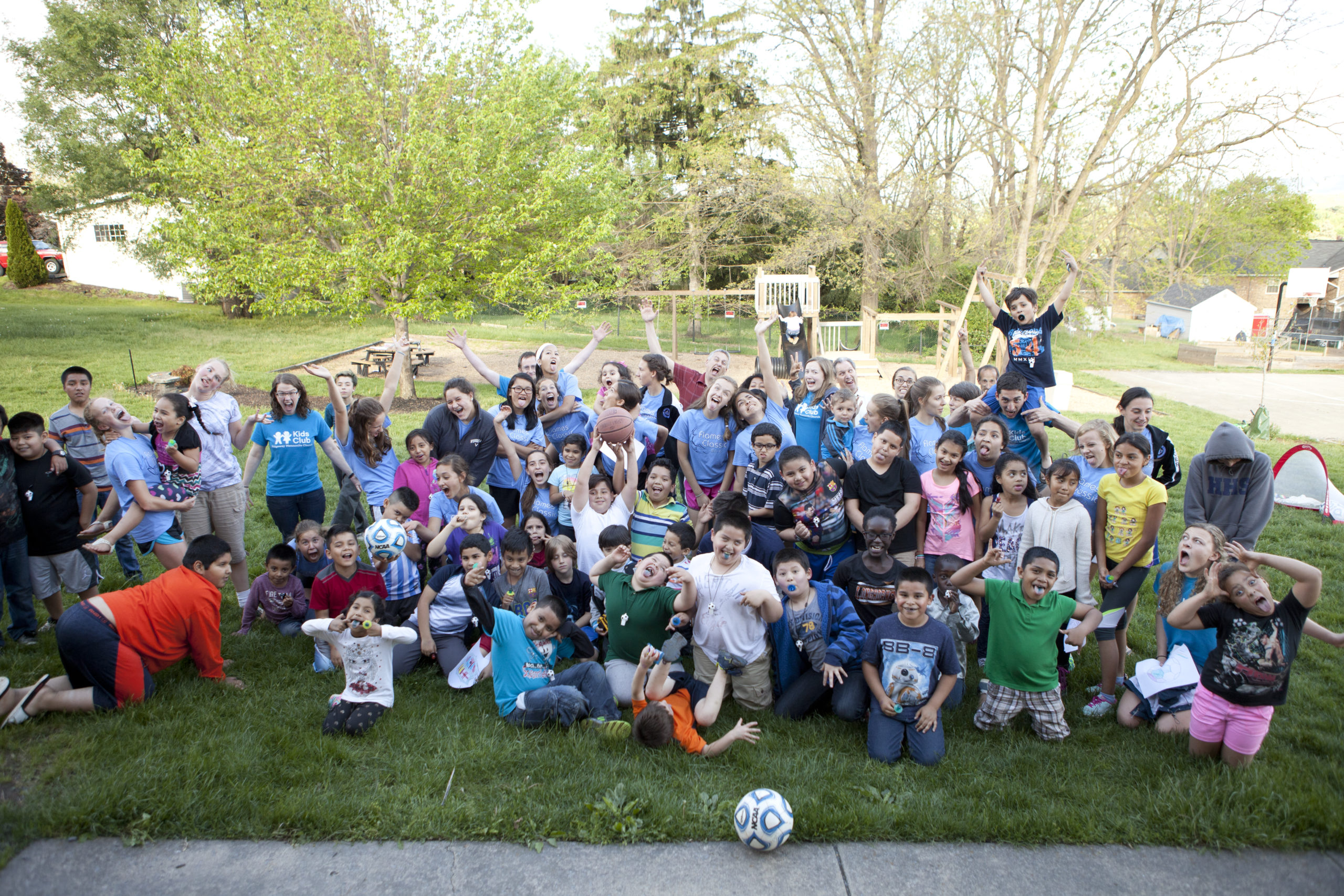 Photo: The attendees at a Wednesday Kids Club event at Ridgeway Mennonite Church in Harrisonburg, Virginia. On this day, members of the Eastern Mennonite High School varsity soccer team volunteered at the church instead of their usual practice. Photo by Andrew Gascho.

This is my second career and Ridgeway is my first pastorate. I’ve been here 12 years now.

In 1996, the church we were attending experienced a terrible conflict and we split. Because of the split, about half of the congregation disappeared. We went from over 300 to around 120.  At that time, I was sort of pushed into a leadership role as chair of the congregation.

We were left in a tough spot. Even though at first I felt like I had been saddled with some of the leadership tasks, I soon found that I seemed to blossom in that role. I enjoyed the work and it didn’t send me screaming for the hills.

The experience of walking and rebuilding confidence in a church that had experienced big wounds and hurt and dissension served as the springboard into ministry for me. A lot of things were coalescing in my life at that time: 9/11 had happened, my children were graduating from high school, and I was 50 years old. I started asking, what do I want to do the next 20 years of my life? I just sensed a call to ministry and it was affirmed by the congregation. So after a year or two, I quit my job of 15 years and went full-time to seminary.

After graduation, I was called into ministry at Ridgeway Mennonite Church. Ridgeway is about 68 years old. It was established in 1948 through the Young People’s Christian Association of Eastern Mennonite College (now University). There were young adults, along with a few older individuals, with a vision for ministry in a poor white section of Harrisonburg by the city dump. They started holding Sunday school and Bible classes on the street corner, and began a neighborhood ministry with children.

In those days, you could go door-to-door and knock and talk to people. This was a fairly close-knit community and the church made inroads with families and children quickly. Eventually they built a church building that could hold 60-75 people, and the congregation grew from there.

In 1960, they moved a half a block up on the hill—up on the ridge, hence the name Ridgeway. Today, on top of the area where the dump used to be, is an elementary school and government housing. The area is an immigrant community with a largely Hispanic population. Ninety percent of children in school are eligible for free lunches, and there are 12 different languages spoken at the school, with Arabic and Spanish being the most prevalent.

I tell people that if our church wasn’t where it is, this would be the location where someone would want to plant a church. The Spanish-speaking congregation that meets in our building and our congregation are the only churches in this area.

About nine years ago, a laundromat moved into our neighborhood. One time I heard someone say that if the laundromat left our community, they would be more missed than our church. We are largely a middle class white “drive-in” congregation. I’ve often wondered what this community thinks of these people that drive in Sunday morning and then leave. I just realized that something was wrong with this picture. Growing out of this realization, our congregation is now reawakening to the missional DNA that’s been dormant among us; the DNA that started and got this church planted in the late 40s and early 50s.

We’re now replicating that same type of formula: ministering and loving on neighborhood children. Our Kid’s Club after-school program is now the defining ministry of this congregation. We have 50 kids attend on average.

Nine years ago my wife and I bought a house in this neighborhood, just around the corner from the church, and we started casting a vision. We encouraged others to move into the neighborhood. I

dearly, deeply wanted this neighborhood and community to know that this was a place where people loved them and people cared for them.

We’re in this unique position where our playground and basketball court and parking lot are overrun with children. On a given afternoon, you can see cars parked near our courts with doors open, people gathering and Latino music blasting.

I realized that all we had to do was open our doors. The children and this neighborhood are already here.

More and more families from the church began moving into the neighborhood. Our associate pastors now live just down the street. Eventually, a young couple, Andrew and Erika Gascho, who were serving as our youth sponsors, had the idea that instead of taking youth and going somewhere else to serve during the summer, they would take about 10 of our senior high youth and sleep overnight in the basement of the church and connect with neighborhood children during the day. They had a slip n’ slide and water games one day. Another day they organized pickup soccer games or were just outside to play with the kids.

They were completely blown away by the response. Our church was overrun with children. Each day, they planned to host activities after lunch, but children began knocking on the door at 9 a.m. After this week, the young couple came to me and said, “We have had a life-changing experience with our youth and neighborhood children. We’re wondering if it’s possible to move into the parsonage and just be a presence with children in the neighborhood.”

I was amazed. I had been praying for this for nine years! So we made it happen. They moved into the neighborhood. The next summer instead of having Vacation Bible School for four days, we cancelled June, July and August Sunday school and the whole church met on Wednesday nights. We hosted a meal open to whoever wanted to show up. Afterwards, adults would have a Bible study or some teaching and then children would have Bible stories, recreation and dessert together. We did this for 10 weeks. It was such a hit!

Our church building really doesn’t support the number of children that show up. On Wednesday nights, we’d have 70-90 children that just walk here because there were food and activities and the word spread like wildfire. This year this was our fourth summer of having community connection nights on Wednesday.

And then, two-and-a-half years ago, we started to dream about hosting year-round events, and we started a Wednesday night after school program. We partnered with another congregation, Eastside Church, that was about three miles away. They were meeting at a school and they had people interested in children’s ministry, but no children. I said, we’ve got the children if you’ve got the people.

We partnered together for almost two years. They were a young congregation with lots of college students that would help. During the school year, we usually have 45 to 60 children connect with us on Wednesday. We assign a prayer partner for each child, and on Wednesdays, we encourage adults to connect with the child that they are meant to pray for.

This whole experience has been life-giving and energized our congregation. And now it’s growing into a bigger vision. Recently we purchased some adjoining land with the crazy idea that in years to come we would build a community hall that seat more than 100 people, the capacity of our current hall.

we told the children to bring their parents, and we had 12 adults that showed up. Afterward, we had hot chocolate and cookies. We also took gift baskets to the homes of many Muslim families in our community, just to let them know that we are glad they are a part of our community and glad they are our neighbors.

We just want to love on the children and tell them about Jesus. We have this vision for continuing to minister in the community which defines who we are. I’m a farm boy raised on a dairy farm in Pennsylvania, and here I am, living in the middle of the city. I was raised to believe that the outside world was a threat, but now I’m part of a group of people saying that know that we’re called to be out there in our neighborhood. I know that when folks have a passion for ministering about the kingdom of Jesus, that excitement is catching.

This ministry has given us a new sense of purpose and a sense that mission doesn’t have to be scary. It’s as simple as hospitality and loving and being present. It’s not so much about any given program as it is about people.

I am fully counting on the fact that our love and ministry and telling stories of Jesus is what communicates what it means to be a Christian, as opposed to what people may see in the media. In the book of Mark, Jesus describe the ways the farmer plants the seeds. When he goes to sleep, the seeds start growing and multiplying, but he doesn’t know how or what their reach will be. We are trying to see our ministry not in numbers, but with a focus on wanting to show who Jesus is through how we are.