The journey of John Powell, a mission advocate for Mennonite Mission Network

John Powell, who has a long history with Mennonite Mission Network and its predecessor agencies, was named to a new position, mission advocate, on Aug.1. Powell brings courage, passion and seventy-times-seven forgiveness to his ministry. He inherited some of these qualities; the rest, he says, is a gift of God’s grace. 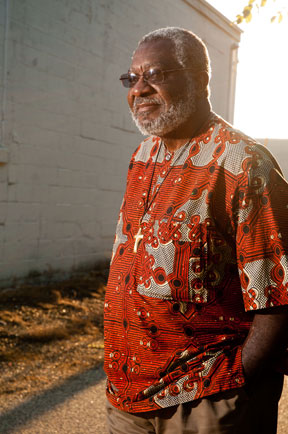 John Powell walks in ways of peace, though his road has not always been peaceful. Powell remembers his father taking on the Ku Klux Klan—and winning. He also remembers intense anger against the racist structures in the Mennonite Church, which he left in 1974, vowing never to return.

Powell spoke with pride of his father’s dignity and daring as he recounted events that took place in 1948. The senior Powell, John Sidney, sold some lumber cut on his farm near Hissop, Ala., to a Klan member who paid with a check calculated to bounce. John Sidney refused to keep quiet about this injustice. When he learned that a pickup of armed Klansmen was headed toward his home, John Sidney sent his 7-year-old son to the safety of a neighbor’s house and laid plans.

As the pickup pulled in front of the Powell home, the fraudulent check-writer yelled an obscenity-studded command for John Sidney to present himself. John Sidney did. He stepped out of the door with composure—and two firearms.

One of the Klansmen barked a command to drop the guns, to which John Sidney replied, “You better look around before you go any further.”

The noisy bravado of the men in the pickup died into silence as they became aware of their precarious situation. Willie Mae, John Sidney’s wife, stood at a window with her rifle trained on one of the Klansmen. Sons and relatives with guns were poised at each window, on the roof and behind trees.

The hush was broken as the pickup sputtered to life and backed off the Powell property. Soon, there was only a cloud of exhaust left to indicate that the Klan had been there. A few days later, John Sidney received full payment for the lumber, in cash.

“I didn’t grow up with a pacifist heritage,” John Powell says. “It was a slow conversion from violence to nonviolence as I was around people who were practicing peace. I saw a change in people and the mood of the nation when protests were nonviolent.”

Powell was in high school when he first spoke with Martin Luther King Jr. Over the next four years, he became a conscientious objector under King’s mentoring.

“That was one of the things Martin taught, that you could be affirming of those who are your enemies,” Powell says. “He also said if we were COs [conscientious objectors], we needed to connect ourselves to a historic peace church.”

Of the peace church options, Powell chose Mennonites because of the voluntary service workers he’d encountered and worked alongside in three Michigan locations. One of these workers, Shirley Hochstedler of Kokomo, Ind., later became Powell’s wife and partner in ministry.

“I was attracted to her because of her mind. She and I got into this heated debate about politics,” Powell says.

Powell expressed appreciation for Shirley’s constant support throughout his various ministries, especially when she was obliged to assume financial support of the family. One of these times was when Powell was fired from an administrative position at University of Michigan. His offense? Spearheading a prayer vigil in front of the university president’s home the night before the regents were to vote on ending their investments in corporations doing business in South Africa.

In addition to partnering with her husband, Shirley advocated against hunger-related injustice. She was the national chairperson of the Nestlé boycott that unveiled the suffering and death resulting from the company’s promotion of breast milk substitutes. She participated in the 1981 Geneva summit where the United Nations and the World Health Organization began to issue and enforce more responsible guidelines in the sale of infant formula.

Church: Both haven and hell

John Powell was born into the church that has been both a haven and a place of wounding for him. As a child in Alabama, he loved “third Sunday worship” that lasted from 9 a.m. to 9:30 p.m. (His congregation met only once a month because it shared a pastor with three other congregations.) Even though the members of his Missionary Baptist congregation may have been feeling helpless and tired from 12-hour days of sharecropping and working in the kitchens of white families, they were always singing God’s praises, Powell says.

“When I attended the churches of my white friends, they would be singing some of the same good songs my church sang. But when we left, it was a totally different story—we were separated,” Powell says. “The same people that were proclaiming God were also cracking heads of black folks. I’m saying, ‘Is this a God of justice?’ ”

In 1968, Powell moved into leadership in the Mennonite Church when he left a good-paying job as a union organizer in the Detroit area to accept a pastorate in Kansas. Powell’s salary as a pastor was less than half what he had been earning. The conference to which the congregation belonged showed how little they valued Powell’s leadership when they suggested that Shirley, who had recently given birth to the Powells’ first child, get a job so the conference could be spared the expense of the pastor’s meager salary.

“Granted, I was a little radical. I did not wear a suit and tie. I wore my dashikis [West African traditional garb]. I had the pulpit on the level of the congregation and rearranged the rows of pews so they were facing each other. I also organized a reconciliation center on the site where the Wichita riots had just happened,” Powell says.

Powell converted a vacated laundromat into The Brothers’ House, a community center where religious leaders could dialogue about race issues.

Powell’s ministry in Wichita lasted one year before he was invited to become executive secretary of the Minority Ministries Council in Elkhart, Ind. In this capacity, he worked on a document that suggested concrete ways of empowering Menno­nite congregations in African-American, Hispanic and Native American communities. In 1969, Powell presented his proposals at a meeting in Turner, Ore.

“If I thought I had hell before, I had more,” Powell says. “A brother got up in the meeting and said, ‘If we do what John Powell says to do, the next thing they’ll have me out of my pulpit and a nigger in there.’ ”

After five years of trying to work within the racist structures of the Mennonite Church, Powell was angry and discouraged.

“I left the Mennonite Church declaring clearly that I would never ever return,” Powell says.

Evangelized back into the Mennonite Church

However, over the next two decades, as Powell ministered several denominations in the United States and internationally, he made his way, step by step, back to the Mennonite Church he loved so much.
“I was evangelized back into the Mennonite Church,” Powell says. “It was brothers and sisters who loved me to death. They invited me to meetings. They listened to me. They became increasingly involved in the struggle for civil rights.”

In 1997, Powell accepted a half-time position as director of evangelism and church development with Mennonite Board of Missions, while he continued to teach and provide administration for a ministry training program at Houghton College, a Wesleyan Church institution in western New York. Through the last 16 years, Powell has served in various directorships and other capacities with the mission agency that became Mennonite Mission Network in 2002.

Mission advocate: a resource for conferences
In Powell’s most recent job transition to mission advocate three months ago, he helps conferences and congregations think beyond mission paradigms that are no longer effective to discover new strategies for reaching out to their region’s specific needs.

Powell facilitates discernment sessions that reflect on what kind of leadership and resources are required to bring fresh vitality to Mennonite congregations.

Powell sees that all his previous life and employment experiences, the spiritual and sociological disciplines, converge to equip him for mission advocacy:

“In my new role, I see myself as being a pastor to congregational leaders, helping them let go in some ways so that the congregation can either flourish or cease to be,” Powell says.

One of the methods Powell uses to help people listen to God has two parts—dwelling in God’s Word and dwelling in the community.

“It’s about listening and thinking how the person is relating to their surroundings and how they are relating to God and being able to help them think about what it really means to be in relationship. Pastoring is helping others discover God’s answer,” Powell says.

In his role as mission advocate, after a group has spent time opening up to God’s Word, participants disperse two-by-two into their community, using their senses to take in their surroundings. Powell calls this exercise in hearing, seeing, smelling and questioning a spiritual discipline. After observing the community in action for several hours, each twosome records its findings, which are then shared with the whole group. By noticing recurring themes, the group begins to discern what God is already doing in their community.

“Where are the intersections?” Powell asks. “That’s where God is at work.”
Mission is about a willingness to be used by God and a commitment to keep listening to God, Powell says.

“We need to keep asking the question, How would my life be different if I was continually pleasing God?” Powell says. “We don’t foolishly rush in and assume we are going to help. We let the Spirit move us. It’s about showing up and getting out of the way.”

Throughout his life, Powell has practiced the ministry of reconciliation he preaches—even to the extent of accepting his Oregon-conference critic as a brother. In Kenya, during a conference that Powell organized to encourage dialogue between African and African-American theologians, he was christened Sebsebe Samantar—the Gatherer and Peacemaker.