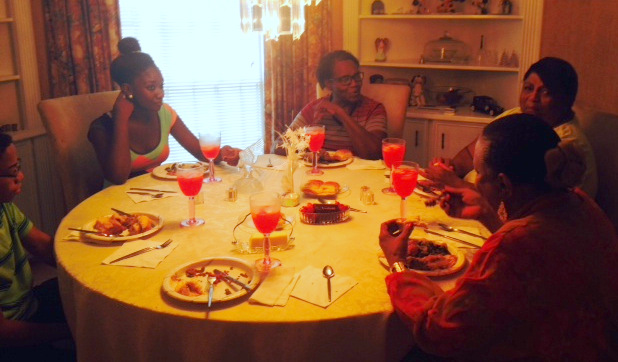 The McMillon family sits to enjoy a dinner in their new multigenerational living arrangement.

A few months ago now, our household went multigenerational. My mother-in-law’s struggles with her memory, and her struggles with those who would take advantage of her had finally reached a place where she could not go on as she was. Having secured her commitment to come live with us once before, we were determined to see it through this time.

Mimi has always been a fiercely independent woman. It was she who took care of her parents, her aunt, her sister and nearly anyone else who needed help. She did not accept our offers readily or particularly willingly, yet we knew what had to happen. As the parents of two teens, we already felt stretched to capacity. The increasingly frequent nine-hour round trips to see about Mimi were taking their toll and accomplishing little. So we secured Mimi’s commitment to come, lined up our allies in the effort, got her in the car and started driving.

We had become full-fledged members of the sandwich generation. We are part of the large group who still have school-age children at home and are also responsible for the care of a parent. My frequent and fervent prayer became “daily bread” to make it through the day. At some point, I composed a partial list of everything that needed to happen: closing a wall, buying a mattress, getting insurance, finding a doctor, arranging finances, figuring out what the new normal was going to be. It was nearly overwhelming. I quickly learned that I needed to take it one day at a time. I had to face that day’s challenge, and no more. I needed to accomplish that day’s tasks, and no more. What Jesus said about each day having sufficient cares of its own really applied to me. Bread to make it through the day is bread enough.

We are four months into it now and God’s grace has been sufficient. Mimi is a huge sports fan and we spend many hours enjoying the NBA and the NFL. We’ve gotten many lists of things accomplished now, though the list is really no shorter. This week we got her a comfortable chair and new blinds for the window of her new bedroom. Just last night she expressed appreciation for our love and care, for the dedicated space we created for her, for the sense of well-being she feels. There goes Mimi caring for us, when we are trying to care for her.

Horace McMillon is the “tent-making” pastor of Open Door Mennonite Church, in Jackson, Miss. He and his wife, Monique, have two children. He is a graduate of both Chicago Theological Seminary and Oberlin College and the author of No Mo’ Broke: Seven Keys to Financial Success from a Christian Perspective. He blogs at churchoftheweb.wordpress.com. This blog post is provided thanks to our partnership with Practicing Families.