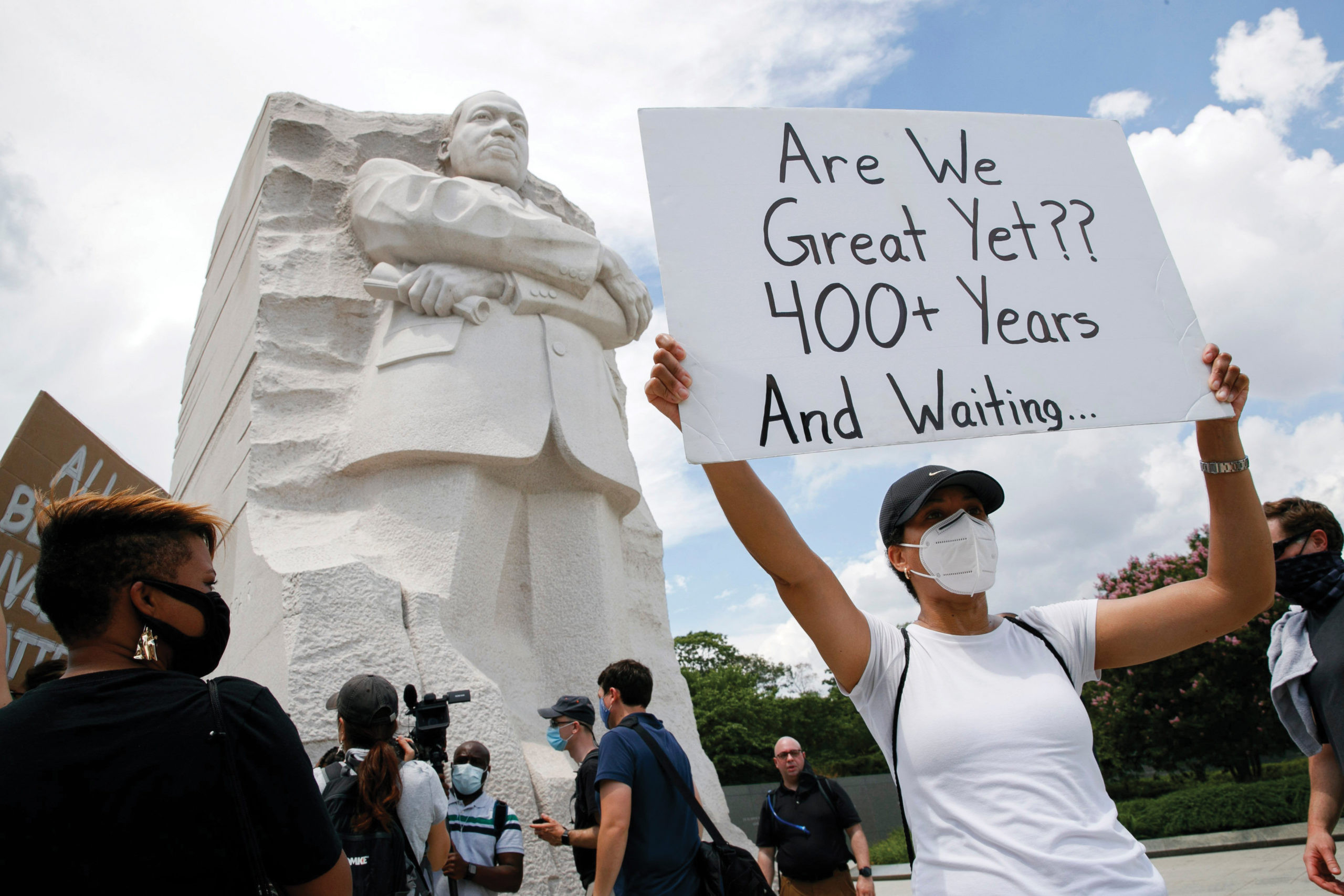 Kimya Hogarth of Silver Spring, Md., takes part in a protest in Washington at the Martin Luther King Jr. Memorial on June 19, 2020, to mark Juneteenth, the holiday celebrating the day in 1865 that enslaved black people in Galveston, Texas, learned they had been freed from bondage, more than two years after the Emancipation Proclamation. — Jacquelyn Martin/AP

I have taught critical race theory for 16 years. It’s part of a course on Racial Justice — my toughest class at Ohio Dominican University, because it raises strong emotions in students, just as we are seeing in the news.

White students get defensive and angry when they learn about white privilege, unconscious racism and cultural, institutional and systemic racism.

Black and brown students get angry as we trace the history of Jim Crow segregation laws and identify the  many ways racist policies persist today in the U.S. economy, the criminal justice system, educational funding, hiring and firing practices and bank loan policies.

But it wasn’t until the last few months that the ideas I find essential in the classroom were vilified by conservative media and many U.S. Christians as a dangerous, leftist ideology.

Controversy over critical race theory has sparked a movement to ban it through legislation and school board policies.

In Ohio, where I live, the House of Representatives introduced a bill to ban the teaching of CRT in ­public schools (the bill is still in committee). Tennessee, Oklahoma and Texas have barred public schools from teaching CRT. Florida Gov. Ron DeSantis is moving to prohibit it through a ruling by the state Board of Education.

But systemic racism is all too real, and I feel called, as an Anabaptist Christian, to teach about it in courses on justice — and to be part of the search for answers.

I might wish to avoid the storm over CRT, but I believe followers of Jesus need to walk straight into storms like this as we seek to do justice, love kindness and walk humbly with God (Micah 6:8).

What is critical race theory? It is a way of teaching history and the social sciences to include the role that slavery and systemic, policy-based racism have played in shaping American society. It is not Marxist. It is not meant to place blame. It simply examines history and current social realities that negatively impact people of color.

Does it cause guilt and anger? Yes, but that is not its purpose. The goals are to understand the sources of racial injustice and find solutions.

Critics say teaching through a race-based lens is divisive. But, according to the director of teacher education at my university, Ohio schools simply teach both the good and bad sides of U.S.  history regarding Native Americans, African Americans, Latinos, women, children, the disabled and the mentally ill.

Teaching CRT is part of becoming culturally competent — building up a body of knowledge, skills and attitudes for respecting individuals and communities of all races and ethnicities.

CRT teaches the full story of how the United States developed as a nation. As students learn about the enslavement of Africans and the segregation that persisted for decades after slavery ended, they may feel guilt or anger. In my experience, they can handle these feelings and learn from them.

They may also feel hope or pride in the many ways the U.S. has righted the wrongs of slavery and segregation and continues to make progress today by reforming criminal-justice law and police policies.

CRT takes into account that equal treatment may not be beneficial or even possible for all. Due to historical racism, some groups of people need more (not just equal) education or housing support than others.

CRT rejects the misconception that U.S. culture is colorblind. It acknowledges the playing field isn’t level, and ending inequality requires a daily commitment to antiracism.

Organized resistance to CRT is actually a sign of progress. When a new level of inclusiveness is reached, some feel a strong instinct to pull back to old and familiar ways.

Conversations about critical race theory may be painful and charged with emotion. But honest discussions — about slavery, lynching, stolen land, deportation, discrimination and ex­clusion — raise awareness of the need to continue to work for racial justice.

We can identify voter suppression, unfair laws and harmful educational policies that disproportionately affect people of color. We can expose the actions of white institutions — the history of segregation and white flight from cities, the impact of all-white leadership, the racial disparity in wages and opportunities for advancement.

We can lament and mourn. We can be honest and angry and hopeful.

Whatever we call these concepts — critical race theory or racial justice — the purpose is the same: As we become culturally competent and challenge our unconscious biases, we see more clearly the beauty of the human diversity God created.

Julie Hart is a retired professor of sociology and peace and justice at Ohio Dominican University in Columbus, Ohio, and previously taught at Bethel College in Kansas. She is a member of Columbus Mennonite Church.