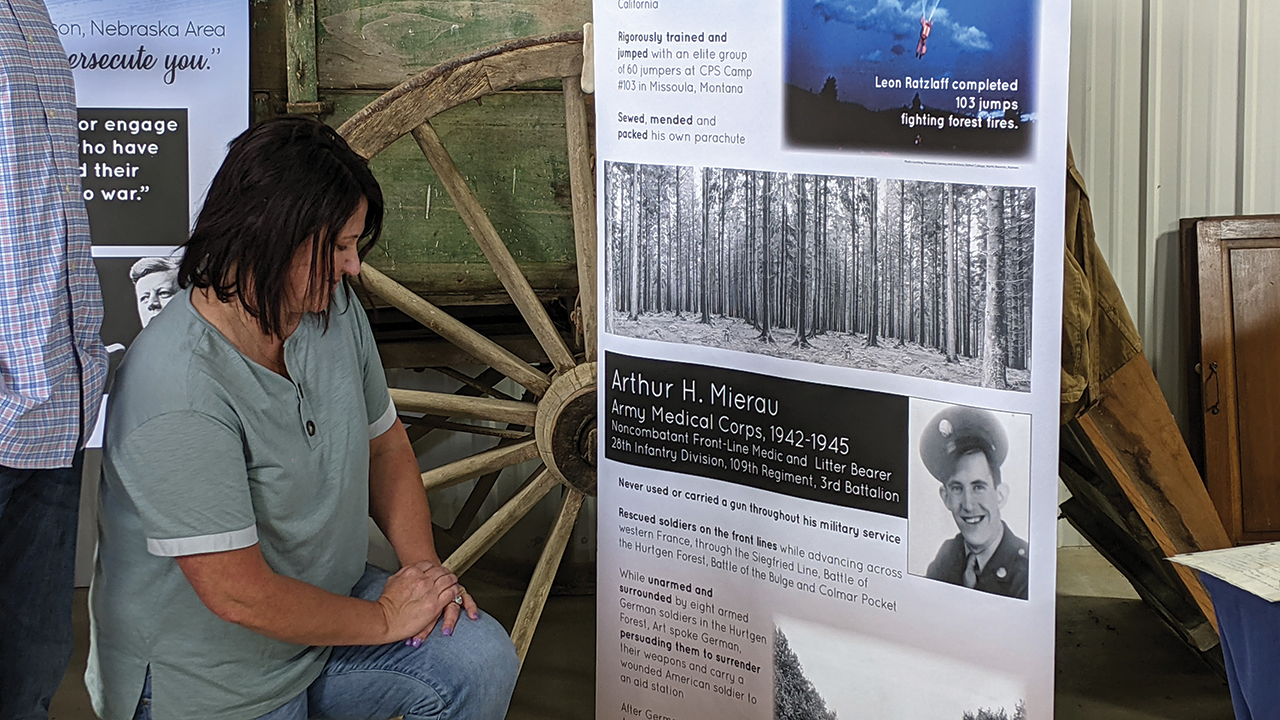 Dani Mierau Epp looks at a display about her grandfather Arthur Mierau, who received a Silver Star as a noncombatant medic and never touched a gun during his military service. On the front lines, he talked eight armed German soldiers into surrendering and carrying a wounded American soldier to his aid station. — Suzanne Freet Ratzlaff/Henderson Mennonite Heritage Museum and Park

Henderson Mennonite Heritage Museum and Park in Nebraska celebrated the grand opening of an exhibit about pacifists’ stories May 23.

“Local Voices of Pacifism” compiles more than 300 stories of local peace-minded people who served their country in peaceful ways. Experiences from World War I through the present include participation in Civilian Public Service, Pax, 1-W alternative service and noncombatant and full military roles.

Henderson Heritage Park worked for four years to collect interviews and documentation after hosting “Voices of Conscience: Peace Witness in the Great War,” an exhibit about the First World War developed by Kauffman Museum in North Newton, Kan., that has toured the U.S. and Canada.

Museum chair Suzanne Freet Ratz­laff said that the traveling exhibit was the first pacifist exhibit in Nebraska history and that it made a big impact on the community, inspiring many to share their own stories.

“Silence had been the norm for this community when returning from any war or service. No one told. No one asked,” she said. “And now suddenly we had stories coming out of the woodwork.”

Those stories and donations of arti­facts are now the state’s first permanent exhibit on pacifism.

The museum is planning other events in addition to the grand opening, with “Historical Voices of Pacifism” local cemetery tours June 6 and July 18, and “Pacifist Voices through Drama” Aug. 1.