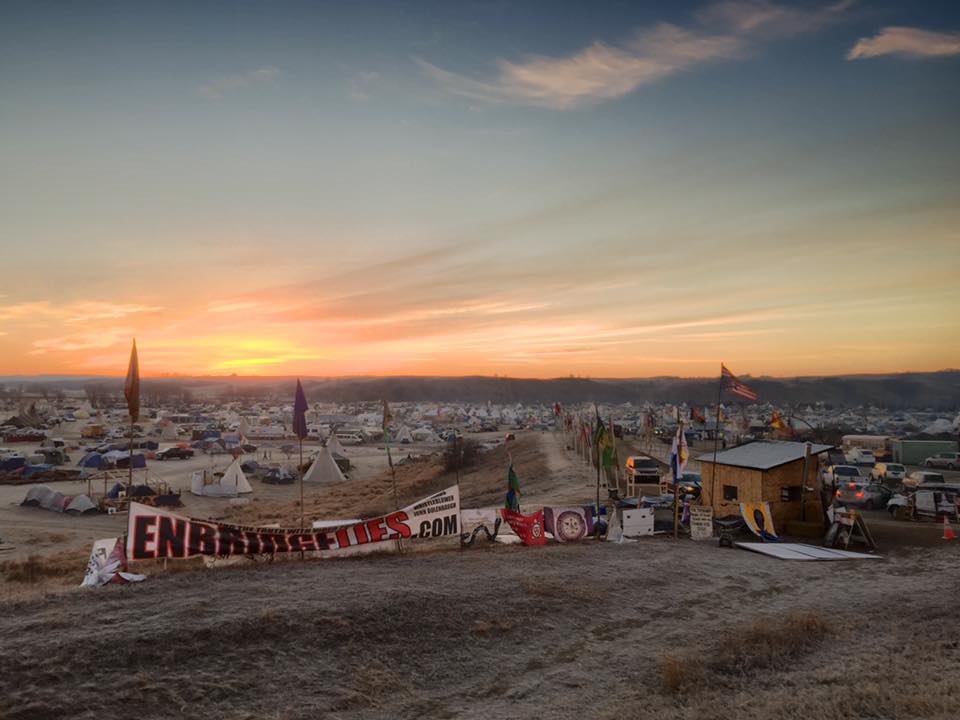 The day I left for Standing Rock, during Children’s Time at my church, I was asked why I was going there to try and stop the construction of the Dakota Access Pipeline. Unsure exactly how to answer the question, I started talking about my Mennonite ancestors, how they settled as farmers just after indigenous communities were brutally killed and displaced by the US and Canadian governments. I talked about my love of the plains, and my anger at the ongoing destruction of native communities and how I benefit from their erasure. I told our young people that I was going to help out, to listen and to carry donations and prayers from our church. When I left that day, I carried in my pocket handfuls of small blessings written by church members.

The water protectors at Standing Rock need all of our prayers, especially native protectors who are particularly targeted by police and private security forces.

We are down to the eleventh hour. On Saturday night (the 19th), DAPL workers began drilling under the Missouri River.

There is very little construction left to be done. Many water protectors are exhausted under the weight of repeated police brutality, felony charges, and temperatures approaching 0 degrees at night. Regardless of how long we on the outside continue to follow Standing Rock, warriors there will be struggling in the courts (and out on the plains) for years to come.

During the six days I was in the Oceti Sakowin camp, I spent most of my time as a member of the Water Protectors Legal Collective, observing actions and helping with jail support. I recorded stories of police breaking ribs at peaceful sit-ins, repeatedly strip-searching young women, throwing elders in dog cages, destroying sacred ceremonial items (including peeing on them), dragging indigenous young people from cars, and denying medical care or needed medicine after protectors were teargassed and beaten. It is clear that the military forces protecting DAPL intend to destroy this movement by any means necessary.

This was most clear to me in the action that occurred on Sunday night (Nov. 20), where I served as a

legal observer for the first three hours. For some context, since the Oct. 27 destruction of the 1851 Treaty Camp, which was built directly in the path of the pipeline, police have maintained a blockade of Highway 1806, the highway that runs between the camp and Bismarck, North Dakota. This blockade is made of concrete blocks, barbed wire, humvees, and two burnt out trucks (it would fit right visually in occupied Palestine, where I used to work).

At around 5 p.m. on Sunday, a group from the camp used a big rig truck to attempt to drag away one of the burnt out trucks and open up the blockade. They were met almost immediately with teargas, pepper spray, and rubber bullets. Some of the teargas landed in the fields on either side of the highway, which caught fire. Eventually, through clouds of teargas, the protectors were able to remove one truck. At this point, the crowd had swelled to several hundred, and police continued to fire teargas and “less lethal” ammunition. Near me, police shot unarmed protectors in the head and legs with rubber bullets and smashed vehicles with bean bag projectiles. Dozens around me vomited because of teargas. As night fell and temperatures dropped below zero, police began spraying water on the crowd, many of whom were gathered around a group of native young people leading song.

Over a dozen ambulances had to be called in to deal with injuries. One elder suffered cardiac arrest, but was revived by CPR. In the end, over 300 people were injured.

A video taken by Tim Nafziger and narrated by John Bergen on Nov. 20:

This level of violence comes not just from a local police force or a particularly confrontational direct action. It comes from the process settler colonialism, the ongoing destruction of native communities by extractive industries and state military forces around the world. It comes from a system that many of us remain complicit in, still unlearning a colonial mindset and living into a new decolonial legacy. The work of the Dismantling the Doctrine of Discovery is important for this, as is our continued support for resistance at Standing Rock and all across Turtle Island.

We need to continue to learn alongside young people about our legacy. We need to pray with our hearts, with our hands, and with our bodies. We live in transformative times which demand deep, grounded commitment.