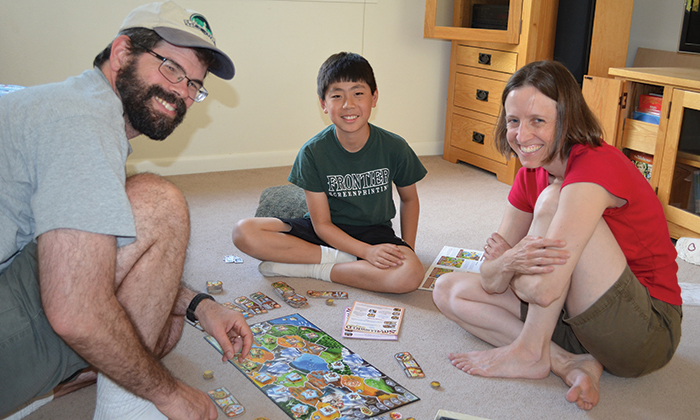 For the past 18 years, fall Saturdays have been predictable in our family. From the time our oldest was 7 years old, on most weekends we could be found on or near the soccer field. With multiple kids playing, our family was often split—with one adult taking a child to a game while the other parent took another child in a different direction. Some days we needed grandparents to help us make all the connections. Although I hesitate to even guess, with five kids, it’s likely we’ve attended a couple hundred games over the years and transported kids to three times that many weeknight practices.

Last fall, with only two children left at home, we contemplated what to do. Both boys had always played soccer, but we knew another year’s commitment would mean yet another season of our family split in opposite directions. After much thought, we decided to opt out of organized sports. All four of us agreed it’s one of the best family decisions we ever made. My only regret? That we didn’t do it sooner. We found the numerous benefits both rewarding and surprising.

Instead of going to practices and games after school, the boys invited neighborhood kids to play. Our backyard often filled with as many as eight or nine kids running, climbing, yelling, inventing and imagining. No adults managed the play; instead, kids negotiated the agenda and, more often than not, the rules. On the nights when neighbors were unavailable, the brothers played, helped make dinner, practiced instruments or enjoyed family time. We read aloud from Anne of Green Gables, watched episodes of Little House on the Prairie and played games such as Dominion, Ticket to Ride and Settlers, activities that would have suffered from time crunch had the boys been committed to fall sports.

One night, one child’s prayer began, “Dear God. Thank you that we get to start Anne of Avonlea tomorrow.”

Sports—often fairly rigid in participation requirements and obligations—create schedule conflicts when it comes to family service. We haven’t always done a good job instilling the motto of my alma mater, Goshen (Ind.) College: “Culture for Service.” It’s been more like a culture of kids and teams and competition. And trash. Team soccer requirements for little kids include juice boxes and snack packs.

This fall, without a team commitment, we’ve been free to participate in other endeavors. For the first time, we attended a Bridging Cultures picnic in our community, eating beans, rice and hamburgers, with a Mariachi band playing in the background as we sipped Horchata and chatted with new friends and old, sometimes with rusty Spanish.

And although we’ve always made it a priority— skipping soccer to do so—this year we could attend the Mennonite Central Committee Festival guilt-free. The boys enjoyed helping their aunt and uncle sort dozens of boxes of reading material for the book sale the day before the auction. That night, they relished a special time of Chinese food, games and a sleepover, before waking up early to partake in the MCC French toast breakfast and get first dibs on the baked goods, apple cider and peppernuts. One boy gained experience in customer service, making change at the sausage booth. And finally, rather than stressing about missing the last game of the season, we enjoyed Drift Creek Camp’s annual meeting, complete with rounds of Ping-Pong, carpet ball and treks through the old growth forest. The fall was rich. I think the boys would agree with the words of Francis of Assisi, “For it is in giving that we receive.” How fortunate our family has been.