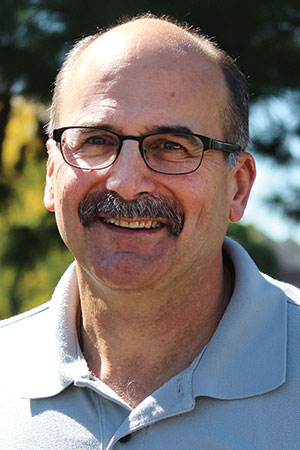 Unlikely allies—Pharisees and Herodians—pose an explosive question to Jesus in the courtyard of Jewish Temple, “Is it right to pay taxes to the emperor or not?”

Jesus asks to see a denarius, a Roman coin. “Whose head is stamped on the coin and whose inscription?” “Caesar’s—the emperor’s,” they say.

With finality—and ambiguity—that reverberate across centuries, Jesus declares, “Give to Caesar what is Caesar’s. Give to God what is God’s.”

I encountered this story in my evening devotions, while working my way through the Gospel of Mark.

In my reverie on Mark 12:13-17, I imagine Jesus strolling around a Mennonite Church USA national convention.

In my mind’s eye, two groups of Mennonites, LGBT Friends and Traditional Marriage Supporters, approach Jesus in a main hall: “We know you teach with integrity, that what you say is unbiased by public opinion. You teach the way of God truthfully. Here’s our question: Is it right to celebrate same-sex marriages or not?”

“What does the 14th amendment to the United States Constitution say?” asks Jesus.

“Ah, just a second, I got it right here on my phone,” one of the inquisitors responds.

Jesus glances at the screen: “What body of people does this speak for? And what does it say?”

“It refers to ‘citizens of the United States’ and says that no state shall deny any person ‘equal protection under the law.’ ”

Jesus looks up at the group gathered around. “Well then, as citizens of the United States, obey the law of the nation. As citizens of God’s kingdom, obey the Word of God.”

Jesus turns and walks away. People in the crowd look at each other. Some smile, some shake their heads. What does he mean?

I imagined a second scene.

The next day another unlikely coalition of Mennonites approaches Jesus as he is eating lunch. This delegation consists of folks from both the Peace and Nonviolence Coalition and the Friends of America.

“We have a question. We know you are an upright person who isn’t swayed by the political winds of the day. You teach God’s way truthfully. Is it right to support the U.S. military and bless those who enlist or not?”

Like before,” Jesus replies, “Can you tell me what the United States Constitution says?”

One of the questioners pipes up, reading from an iPad: “It says in the Preamble, ‘We the People of the United States, in order to form a more perfect Union, establish justice, insure domestic tranquility, provide for the common defense, promote the general welfare and secure the blessings of liberty to ourselves and our posterity, do ordain and establish this Constitution for the United States of America.’ ”

“OK,” says Jesus. “What body of people does this speak for? And what does it say?”

“It speaks for the citizens of the United States and says that common defense through the army, navy and militia is expected of the nation’s citizens.”

Tough questions. Jesus’ reply to the first is part of Scripture. His declaration is crystal clear in its division of rightful duty toward Caesar and toward God. But the implications tease the mind.

How pastors, members, conferences and congregations respond to the same-sex and military questions will help shape the witness of Menno­nite Church USA in coming decades.

In Mennonite Church USA, a temptation for left-leaning congregations is to absorb cultural values that individualize sexual behaviors and norms.

For right-leaning congregations, a key temptation is to absorb cultural values that nationalize allegiances and identity.

Both temptations echo pagan gods and discount the voice of God speaking through the Scriptures as revealed by Jesus the Christ interpreted within the church by the aid of the Holy Spirit.

Let us think, love and live deeply into Jesus’ response to the Pharisees and Herodians: “Render to Caesar what is Caesar’s. Render to God what is God’s.”

Mark Wenger is director of Eastern Mennonite Seminary in Lancaster, Pa. He submitted this article last May.