Disclaimer: For some reason I ended up taking a lot of grammatical liberties in this piece. Prescriptive grammarians may want to steer clear.

From Thursday through Saturday of last week, Charletta and I attended PAPA festival. This is the People Against Poverty and Apathy festival that is a “convergence of communities and movements coming together to share, dream, and create.” The gathering has happened twice before, first in 1997 and then again in 2006. 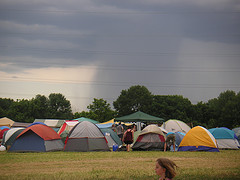 Plow Creek Mennonite Church and Fellowship hosted the event on their. I’ve visited Plow Creek a number of times over years, but the PAPAfarians had trasnformed the place. When we arrived on Thursday morning, the stubble on the oat fields was still visible between the veggie fueled bus campers and the 500 gallon water tank. But by that evening, the fields had sprouted tents like mushrooms in warm manure. Over 750 people showed up for the four day gathering that all told. Our entrance fee was on a donation basis since the event was run completely by volunteers, including most of the attendees themselves.

“I was surprised by how calm and peaceful everything felt.” said Adam Vaughan from Reba Place Fellowship, “Everything went smoothly because, though there were a lot of people, everone was doing it right–looking out for one another, cleaning up after themselves, pitching in on tasks that needed to be done.”

On Thursday afternoon we gathered to watch the opening festivities on the main stage, two hay wagons pushed together in a field. The welcome events which included an address by Tony Campolo (via cell phone) and an anarchist beat poetry band from St. Louis. More eccentric musical combinations were to follow in the ensuing days with musical acts ranging from a celestial harpist to a wild concert by the Psalters, a traveller/tribal/punk band that played hymns, folk songs and very loud worship songs.

The highlight of the gathering for me were the break out sessions. Each morning there were two slots for learning workshops and in the afternoon two for skill shares. The learning workshops topics included ideas for building communities (“Leadership Designs and Practices in Christian Community”), socio-political analysis (“Dismantling the Empire: Exploitation and War”), spirituality (“Emotional Healing Through Relationship With Jesus”) and many more (“Farming as Ministry”). 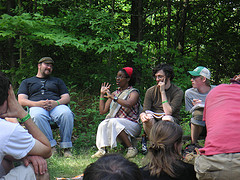 I attended “Community in Times of Upheaval” which was a wide ranging and enthusiastic discusison facilitated by folks from the Bruderhof. “Nurturing Spiritual Rhythms in Community: Becoming an Uneventful Church” was led by Mennonite pastor and submergent organizer, Mark Van Steenwyk. He did a good job of balancing deconstruction: “I’m holier then you and will oppress you with my spiritual meta narratives” (as he described one dubious discipleship tactic) and practical ideas for building a community spiritual practice: learning to listen to your neighbors, survive the chaos and move beyond event-based spirituality (if I just go to one more prayer meeting…).

I also sat in on “Cultivating Goodness: Creating Environments Where It’s Easier to be Good” led by Shane Claiborne. Shane shared stories from the the Potter Street Community (formerly known as the Simple Way) and talked about useful tricks they’ve discovered over the years for sustainable community living. A number of Plow Creek veterans (30 years in community and counting) shared words of wisdom and encouragement with the younger generations of community builders. Once again, participant participation was high and wisdom filled.

As the name implies, the skills shares focused on offering participants practical advice. The topics were even more eclectic then the workshops including crafts (knitting, pie baking and fiber crafting), agriculture (animal husbandry, CSA and weeding), nature skills (mushrooms, edible wild plants and herbs), performance (drumming, circus skills and henna) and the Chauceresque (pilgrimage, hydrotherapy and midwifery). In short, it was a very very creative bunch of people. I did two peaceamaking skill shares with role plays based on CPT’s work. I was very impressed with the enthusiasm of participants and the wisdom they shared from their own life experience. 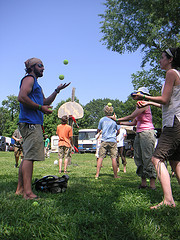 I only managed to attend one skill share aside from the two I led, but it was well worth it. The “Purpose Driven Circus” offered folks the chance to learn juggling (clubs or balls), slack rope walking, unicycle riding, Poi, devil sticks and Diabolos. With an introduction grounding the whole thing in a theology of clowning, fools and play. I tried juggling for a while, but mostly took lots of photos.

Amidst this delightful, energetic and faithful gathering, I ran into lots of friends and made a few new ones. In case it hasn’t become obvious from my description, PAPA festival serves as the unofficial convergence space for the New Monasticism movement. The movement is gradually coming of age and the number of kids running around was one concrete manifestation of that. There were at least 70 kids running around and hanging out in the Children’s village. Their presence alongside many dreadlocked heads contributed to a carnivalesque collision of counterculture and family friendly feeling.

A fun time was had by all.

P.S. I took lots and lots of photos: