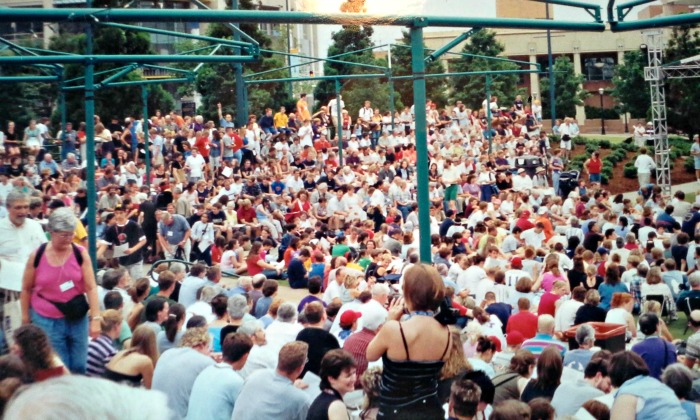 I am dreading convention.

That seems weird to write here. I love Mennonite Church USA conventions. I am a convention nerd.

I love the great “reunion” of friends and like-hearted individuals from every corner of our denomination. I love the energy and excitement. I love the worship and the speakers, not to mention the swag.

Convention has been a formative piece of my faith both as a teen and as a young adult.

But this year I have a pit in my stomach that makes me feel sick every time I even think about it.

Dread—yes, that is the word. I am dreading convention.

Recently a friend of mine gave me a book, Redeeming Sex: Naked Conversations about Sexuality and Spirituality, by Debra Hirsch (who will be a speaker at Kansas City 2015). I am hung up on the last bit of her introduction.

It is never my intention to overwhelm you or even necessarily convince you of the rightness of my theological opinion. This book is about the posture one takes, not the position one holds.

But sadly, the position we hold feels like the only question we pastors are asked these days. We hear, What is your position?

I have actually heard it referred to as “The Question”—the one that we must all have the right answer to. For some reason, insisting that I take a “position” on “The Question” seems downright violent to me.

I am content—for the time being—to simply ask questions and listen to others. Asking me to prematurely take a stand on something—just because someone else’s anxiety warrants it—feels like a violent act.

Now, I am not what you would call a “blue blood” Mennonite.

I was raised in a family that prided itself on its ability to fight—both metaphorically and literally.

I have watched my share of war movies, G.I. Jane being a particular favorite of mine.

I finally realized why this whole convention thing feels so off. People of peace are positioning themselves for a war at convention.

A position is something on which you take a stand, ideally to the death.

Granted, Jesus did take a position on something to the death, but it was not over one particular issue of morality.

One could argue that Jesus’ position he carried with him unto death was that he was not what anyone was expecting.

People expected one thing and Jesus gave them another.

Every position the Pharisees thought was unbreakable, immovable, unwavering, Jesus showed them a new way to interpret it. (He was not popular in his time).

The people wanted Jesus to take a position.

Come on! Just take a position already! On the emperor. On taxes. On adultery. On Sabbath. On the poor.

And what did Jesus do? He would ask them a question. He would tell them a story. He would say something crazy like, “Consider this …” or “You have heard it said, but I say …”

I imagine Jesus as the patient teacher, who has the know-it-all student who can’t keep her mouth shut. The teacher respectfully listens and summarizes what she has heard/said and then gently points in a different direction.

It’s not Jesus’ position that endeared him to people. It was his posture.

It was one of humility and graciousness and love and at times outrage. Yes, I know you have heard and what you have heard has merit, but let me tell you a different perspective, he would say.

I don’t want to dread convention.

I want to trust that God isn’t going to waste everyone’s time.

I want to trust that the Holy Spirit still believes in Mennonite Church USA.

I want to believe that every person who will gather in Kansas City truly wants to seek the heart of God, regardless of her position.

I want to believe that everyone who goes, gathers with the intention of worshipping together and not just go to the delegate sessions to vent.

I want people of peace to posture themselves that way.

As Deb Hirsch finishes the introduction to her book she writes:

This book is about the posture one takes, not the position one holds. I do however want to be your conversation partner. So converse with me. Please give me space and grace to be myself—an all-too-human woman who is trying to work this all out on behalf of my Lord and my friends and the mission of the church. I do love God and his people, and I want us all to get this right.

I echo this desire.

Can we head toward convention recognizing that we all love the Lord and our friends and the mission of the church?

Together we love God and God’s people and we all want to get this right. Are we willing to believe that?