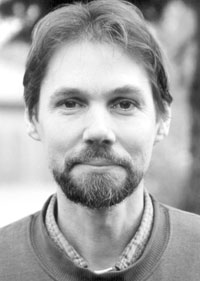 At one point I asked, “What makes bullies bully?” After a pause, one girl raised her hand. “Bullies bully,” she said, “because they’ve been bullied before, and they don’t want to be bullied again.” Wow, I thought to myself.

Ted Lewis lives in Duluth, Minnesota, and is a restorative justice trainer, mediator, writer, and consultant. He also gives workshops to church groups on Bible Conflictology and Communication.

For some people, forgiving another person for hurtful actions in the past can be one of the hardest things to do. With every good intention to reach a redemptive end, the effort to find freedom from negative thoughts and feelings can seem like a very long journey. What is it, then, that makes forgiveness such a complicated process at times? Is there any wisdom to be found that can ease the burden of this journey?

One reason forgiveness is difficult to figure out is that the language of forgiveness can sometimes be an obstacle. For one thing, forgiveness can have different meanings for different people. Also, those who think that saying “I forgive you” can make things better can sometimes be confused when old resentments resurface. True, there is an aspect of forgiveness that is decisional, and the New Testament supports this. But forgiveness, unlike an apology, is most often an inner process that takes time, and for that reason words should not outpace what is happening in the heart of the person seeking forgiveness and peace of mind.

I recently interviewed 20 victims of criminal cases involving murdered loved ones. All of them voluntarily chose to meet with the perpetrator in prison. After preparation, these joint dialogues were facilitated by a mediator who ensured that things would be safe and constructive. About one-third of these victims found it helpful to use the language of forgiveness, and yet those who did not (or could not) use the language still described profound experiences of healing and forgiveness.

One of the victims who had an aversion to the concept of forgiveness had this to say: “When I walked out of the prison, the core of my whole life changed. I felt I was in a state of grace. I felt like a completely new person. I felt like the whole burden of everything had lifted from me.” One way to define forgiveness on this experiential level is that it is the release of inner negativity toward another which holds us captive to the past.

Paul’s short letter to Philemon can be seen as an invitation for relational healing without the use of forgiveness language. When Paul was in prison at the end of his life, one of his attendants was a runaway slave-servant named Onesimus. We do not know the circumstances of why he left his master Philemon in the city of Colossi, but Paul’s letter does convey that these two men were separated by more than just geographical distance. A tense emotional wall had also come between them.

Paul acts like a third-party mediator to promote reconciliation, yet one can hardly call him neutral in his role. He writes intimately about these two “brothers” of faith, and he offers to pay any outstanding restitution. Why does he take on this role? Paul knows that Philemon holds a fair amount of inner resistance to the prospect of re-uniting with Onesimus. Paul therefore inserts his bridge-building role into a situation that would otherwise remain unresolved. He essentially creates a zone of openness in which Philemon can more easily enter and freely choose to reconcile with Onesimus.

One thing stands out strongly: Paul’s style is very invitational. Without any coercion, he appeals “on the basis of love” (vs. 9) to the voluntary nature of relational restoration. “I did not want to do anything without your consent” (vs. 14). After affirming his partnership with Philemon, Paul writes, “I am sending him — who is my very heart — back to you” (vs. 12). The Greek word for ‘heart’ is literally ‘bowels’ which in Roman-Greco culture was associated with deep compassion and empathy. “Welcome him as you would welcome me” (vs. 17).

All of this affectionate language appeals more to the heart than to the head. Paul’s approach fits well with new research that shows how forgiveness is truly a relational, heart-to-heart connection between two alienated parties. While Paul can be seen as a model for third-party mediators, his letter also reveals practical wisdom for how anyone can further their own forgiveness journey with another person. Three insights stand out in this heart-centered letter.

First, Paul emphasizes the positives to build up a credit of trust. In today’s social service language, Paul uses a “strength-based” approach along with “appreciative inquiry”. He highlights Philemon’s love for others and he highlights Onesimus’ usefulness (which is a wordplay on his name). By dignifying both parties in the context of their shame and alienation, Paul is helping to build up a credit of trust where there was previously a debit of trust.

Second, Paul emphasizes the common humanity of both parties. While master-slave dynamics defined the original relationship, Paul now speaks of the way Onesimus is dear to both him and Philemon “as a fellow man and as a brother in the Lord” (vs.16). Onesimus no longer needs to be viewed as a slave. As we re-narrate our understanding of the other person, we gain a new appreciation for how their strengths and weaknesses are not that dissimilar to our own.

Third, Paul emphasizes the future without dwelling on the past. In the final verses Paul references a future that assumes reconciliation. Onesimus will be welcomed, debts will be paid, hearts will be refreshed, and even a guest room will be prepared for Paul’s next visit (vs. 17-22). For Paul, eschatology informs ethics. By envisioning a healed relationship and working backwards to the present, one can be freed from the grip of past hurts and experience newness in the present.

Implicit in Paul’s unifying effort is the power of face-to-face meetings to diffuse the weight of stored-up emotions. When people do not have the chance to face each other, it is easier for one or both parties to sustain a repetitious monologue of negative thinking. This is the stuff of long-held grudges. But when people in conflict meet, as Jacob and Esau did after years of being apart, it is as if the excess negative charge vanishes into the stratosphere. Goodwill toward the other takes over and the power of the past is defeated.

But what does one do when it is not possible to meet the other person or when the other person expresses no interest in meeting? How can forgiveness happen when there is no chance for dialogue to ground out the electricity that keeps the issue alive in one’s heart? There are no easy answers, but certainly, within a larger theological and spiritual context, there is hope.

In light of the three insights mentioned above, one can further the journey of forgiveness by emphasizing the positives in the situation, the common humanity in the other person, and a new future which can be practiced in the present. Consider first how easy it is to emphasize the opposite points. We can dwell on negatives, not only by blaming the other person, but by being hard on ourselves for how we handled the situation. We can dwell on the way the other person is less righteous or less human than ourselves, thinking they deserve greater consequences. And thirdly, we can dwell on a past that remains frozen in our present, ruminating memories.

As Christians, though, we can see how past sins are no longer determinative in our lives. Rather, in Christ, our lives are determined by a redeemed future that informs the present. With spiritual eyesight we can see how another person may have a patterned history of deep pain that affects their behaviors toward others. This perspective will usually give us more compassion toward them. Finally, we come to wish the other person to be well, to be whole, to be blessed, and to have a better future.

None of this happens over night, but if we practice the intention to forgive, we will lean into the experience of forgiving others. This does have a therapeutic benefit to the forgiver. Clinical research is increasingly backing the holistic health benefits of forgiveness. But from a biblical perspective, forgiveness is always a relational dynamic, with benefits to both parties. It is as Shakespeare wrote of mercy in The Merchant of Venice: “It is twice blest; It blesseth him that gives and him that takes.”

My niece and I once had a ‘falling out’ that resulted in us avoiding each other for two years. She had signaled to me to “back off,” and I basically said to myself, “Okay, if that’s what you want, you got it.” But for me the excess negative charge remained in the air and made me restless. I struggled with who should take the initiative to mend things. It seemed more like her responsibility than my own. I finally came around with the thought that “love will find a way.”

We finally corresponded and then met for lunch; altogether it was a warm, reconciling experience. I don’t recall the word ‘forgive’ every coming up, but both of us certainly extended grace toward each other and we mutually experienced forgiveness. It was a moment of being set free from the sting of the past that had sustained a negativity in the present. Newness rolled away the stone of separation, and our relationship became peaceful.

This mutual giving within the context of ‘for-giving’ really speaks to the way forgiveness should be more commonplace within church communities. If you think about it, a major obstacle in the forgiveness journey is the nagging feeling that we should be getting something in order for things to be set right. And this getting is important, too. Impacted people need validation, empathy, and reparation. But when we consider how the essence of forgiveness involves a giving dynamic between persons, somebody has to take the risk to offer something new and heartfelt to the other person. Once the exchange of conversational gift-giving starts, the giving and getting dynamic becomes one happy jumble of reciprocity.

We do not exactly know how things turned out between Philemon and Onesimus. But we do know that Onesimus was sent by Paul to carry the very letter which was designed to soften Philemon’s heart toward reconciliation. Assuming Onesimus was not killed by bandits on this walking journey of 800 miles, we can imagine the two of them meeting, we can imagine Philemon later reading the letter, and then…?  Perhaps this is the point where we are in some of our own journeys. We are still waiting to see how things will finally turn out. With God’s help, though, love will find a way.