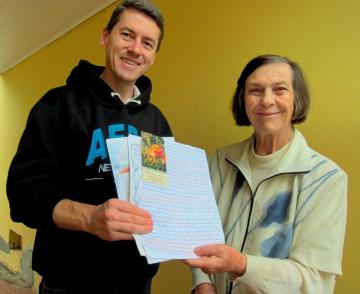 A retired school teacher and prison inmates are unlikely pen pals who have exchanged thousands of letters in Curitiba, Brazil over the past decade.

It began when a man in prison responded to a short piece 76-year-old Dona Maria Martins published in a devotional magazine in 2006. She replied to the letter that arrived at her church’s address, and soon found herself responding to dozens of letters each week from inmates seeking pastoral care

“Often these men are abandoned by their families,” Dona Maria says. “I became a spiritual mother to them.” Her letters tell about Jesus and usually include illustrations clipped from magazines.

“God is love,” Dona Maria declares, “and the letters are my way of sharing that good news.”