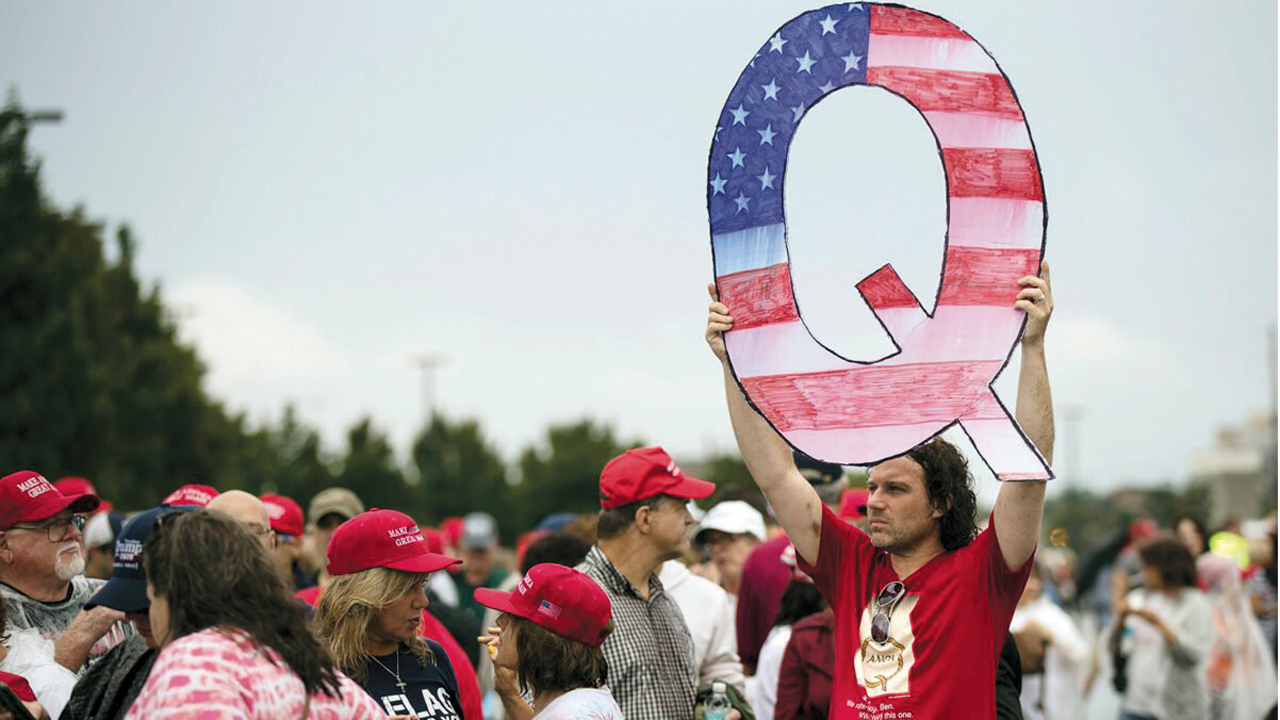 In this Aug. 2, 2018, photo, David Reinert holds a Q sign while waiting in line with others to enter a campaign rally with President Trump in Wilkes-Barre, Pa. — Matt Rourke/AP

It’s a rough time to be a pastor. An election year, racial unrest and a global pandemic each has challenged the usual methods of ministry.

But there’s another challenge that pastors say is on the rise in their flocks. It is taking on the power of a new religion that’s dividing churches and hurting Christian witness.

Mark Fugitt, senior pastor of Round Grove Baptist Church in Miller, Mo., sat down to count the conspiracy theories people in his church are sharing on Facebook. The list included claims that 5G radio waves are used for mind control; that George Floyd’s murder is a hoax; that Bill Gates is related to the devil; that masks can kill you; that the germ theory isn’t real.

“You don’t just see it once,” said Fugitt. “If there’s ever anything posted, you’ll see it five to 10 times. It’s escalating for sure.”

Conspiracy theories — grand narratives that seek to prove that powerful actors are secretly controlling events and institutions for evil purposes — are nothing new in the U.S. But since 2017, an overarching conspiracy theory, QAnon, has coalesced in online forums and created millions of believers. “To look at QAnon is to see not just a conspiracy theory but the birth of a new religion,” wrote Adrienne LaFrance in The Atlantic in June.

Named after “Q,” who posts anonymously on the online bulletin board 4chan, QAnon alleges that President Trump and military officials are working to expose a “deep state” pedophile ring with links to Hollywood, the media and the Democratic Party. Since its first mention some three years ago, the theory has drawn adherents looking for a clear way to explain disorienting global events.

Once the fascination of far-right commentators and their followers, QAnon is no longer fringe. With support from Trump and other elected officials, it has gained credibility both on the web and in the offline world: In Georgia, a candidate for Congress has praised Q as “a mythical hero,” and at least five other congressional hopefuls from Illinois to Oregon have voiced support.

John thorngate, pastor at LifeBridge, a nondenominational church of about 300 in a Milwaukee suburb, said his members have shared Plandemic, a half-hour film that presents COVID-19 as a moneymaking scheme by government officials and others, on Facebook. Members have also passed around a now-banned Breit­bart video that promotes hydroxychloroquine as a cure for the virus.

Thorngate attributes the phenomenon in part to the “death of expertise” — a distrust of authority figures that leads some Americans to undervalue long-established measures of competency and wisdom. “That part for us is concerning, that nothing feels authoritative right now,” he said.

There’s no hard data on how many Christians espouse QAnon. But Ed Stetzer, executive director of the Billy Graham Center at Wheaton College, noted that distrust of mainstream news sources “can feed a penchant for conspiracy theories.”

Some pastors are concerned that the popularity of conspiracy theories among Christians causes others to mistrust the church.

“Young people are exiting the church because they see their parents and mentors and pastors and Sunday school teachers spreading things that even at a young age they can see through,” said Jeb Barr, the senior pastor of First Baptist Church of Elm Mott outside Waco, Texas, who said conspiracy theories are “extremely widespread and getting worse” among his online church networks.

“Why would we listen to my friend Joe who’s telling me about Jesus but who also thinks Communists are taking over America and [Democrats are] operating a pedophile ring out of a pizza restaurant?” he asked. “Why would we be believed?”

Barr encourages his members to read “boring news.” He will recommend news sources that are credible.

Fugitt said it’s not effective to tell conspiracy spreaders that what they are sharing online is false. Rather, he tries to address the dehumanizing language of QAnon theories that equate certain people with evil.

QAnon is more than a political ideology. It’s a spiritual worldview that co-opts many Christian-sounding ideas to promote verifiably false claims.

And it’s having life-and-death effects: It’s hampering the work of anti-sex-trafficking organizations. The FBI has linked it to violence and threats of violence. And its adherents are downplaying the threat of COVID and thus putting others’ lives at risk.

The earliest christians contended with the heresy of Gnosticism, which emphasized secret knowledge. Today, when pastors are having to host digital church and try to meet members’ needs virtually, the idea of adding “fight heresy” to their to-do list might sound exhausting. But a core calling of church leaders is to speak the truth in love. It’s not loving to allow impressionable people to be taken in by falsehood. Nor is it loving to allow them to spread falsehood and slander to others.

“Conspiracy theories thrive on a sort of cynicism that says, ‘We see a different reality that no one else sees,’ ” said Jared Stacy, young adult pastor at Spotswood Baptist Church in Fredericksburg, Va. He believes pastors need to teach that conspiracy theories are not where Christians should find a basis in reality. “Paul says to take every thought captive. Addressing conspiracy theories is part of that work.”