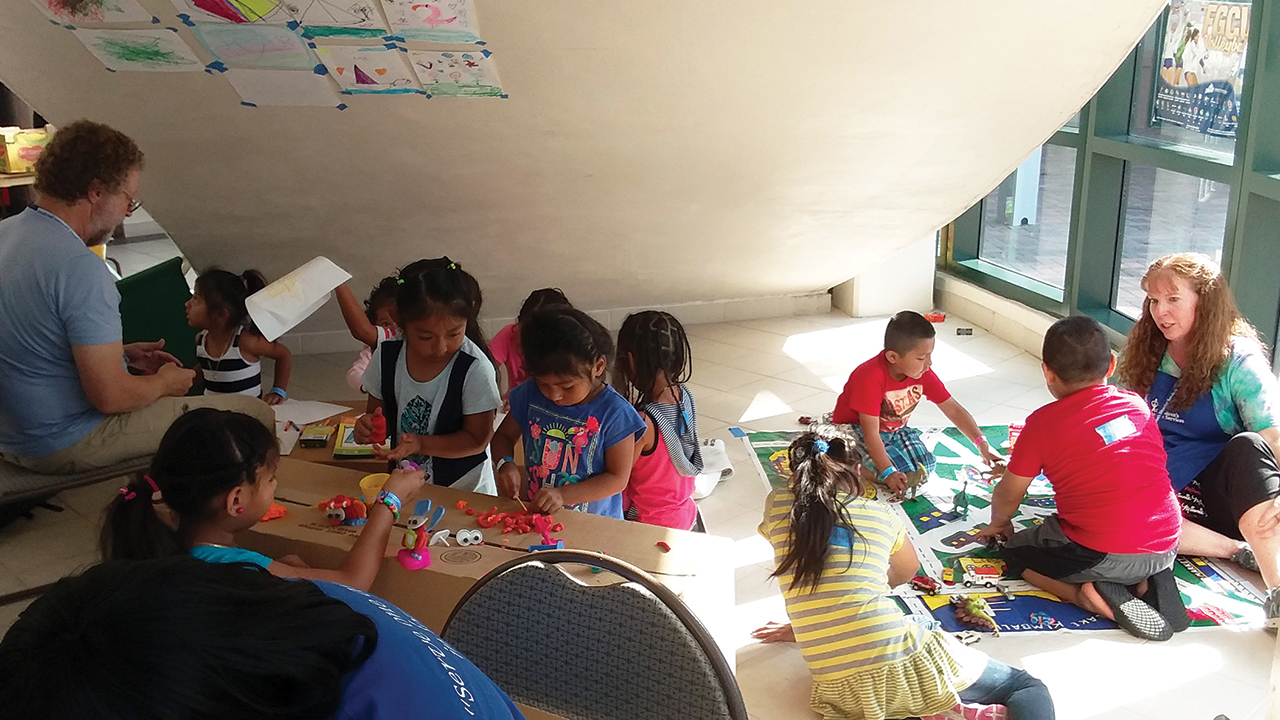 A few days after U.S. military forces completed their withdrawal from Afghanistan at the end of August, Gladys Remnant began her Brethren Disaster Ministries deployment.

As a volunteer with Children’s Disaster Services, a division of BDM, she and others provided child care for Afghan children at a processing center for refugee families near Dulles International Airport in Virginia.

The Church of the Brethren ministry recently marked 40 years of caring for children in the wake of disasters — both natural and man-made.

“I taught kindergarten for 35 years,” said Remnant, who retired recently. “Children are children. Part of what we do with Children’s Disaster Service is to set up play centers so children have opportunities to play, and through play they can express themselves.

Remnant was inspired to volunteer with children — giving them an outlet for energy and giving parents a break to focus on other things — through her congregation, Bridgewater Church of the Brethren in Virginia. There, she worshiped with R. Jan and Roma Jo Thompson.

R. Jan Thompson, who died in 2015, noticed while doing disaster response work in the late 1970s that families often had to stand in long lines to do paperwork with FEMA.

Church of the Brethren service ministries executive director Roy Winter said it was not a friendly setting for energetic children. Children’s Disaster Services officially began in 1980.

“If a child had to go to the bathroom without one person to stay in place, they’d lose their place, and sometimes those lines could last all day,” he said. “So it was just a very practical need. These kids needed to go to the restroom, they needed food, they needed to be a kid, and it was something we could do.”

Disaster relief processing centers have evolved since the 1970s and ’80s, so many CDS volunteers now work in shelters after hurricanes. These facilities are better organized today, but they are still high-stress environments.

Winter noted domestic violence tends to go up significantly after a disaster, and that can impact children.

“When kids aren’t running around screaming, that reduces tension a great deal, even for shelter managers,” he said. “There are occasionally stories of when CDS arrives, if we’re known already, there’s applause because they know things are going to calm down.”

Teams of four or five volunteers arrive with a “kit of comfort” — a large suitcase filled with puppets and dolls, building blocks, cars and trucks, some books and the universally popular Play-Doh and art supplies. As the program comes out of a pandemic hiatus, about 17 vaccinated volunteers are responding to Hurricane Ida in Louisiana, and helping Afghan refugees in Virginia and New Mexico.

“We define how many we can handle based on the size of the space and number of volunteers,” Winter said. “After September 11, when we were working at Pier 94 in New York City, there were times we had more than 100 kids at the child-care center. That was a little too much.”

The program was created with input from early childhood specialists and psychologists, but volunteers emphasize they are not counselors or therapists.

“It’s just trying to take the time to get to know them in the few moments or hour you have and meeting the child where they are,” said Donna Benson, a member of First Church of the Brethren in Harrisburg, Pa., who is retired after a career in special education. “That’s a strategy from special ed, just trying to show you care and you love these kids.”

Benson worked with Afghan children at the Virginia processing center after previous responses to hurricanes and flooding in the Southeastern United States. While the U.S. State Department and Save the Children provided translators, most interactions around art projects and other activities needed little interpretive help.

“These kids had hope and resilience,” Benson said. “My last day working there was 9/11, the 20th anniversary, and an amazing thing happened.

“A boy of 12 or 13 came up to me. He made a U.S. flag and a flagpole. He held it right up to me and placed his hand over his heart and asked to say the Pledge of Allegiance together. I’m a pacifist, but a patriotic pacifist, and that was an amazing moment.”

Along with Hurricanes and earthquakes, volunteers have responded at evacuation centers during California wildfires and to assist migrants with Catholic Charities along the southern U.S. border.

Winter said CDS developed critical response teams to deal with the extra level of trauma that airline disasters posed in the 1980s. The Church of the Brethren took a version of that philosophy to northern Nigeria to help after Boko Haram militants kidnapped hundreds of girls from a Brethren school there in 2014.

“We were in Las Vegas after those sniper shootings. We were in Florida after the nightclub shootings,” he said. “We find ourselves deploying more often now after shootings than airline accidents, which is incredibly tragic.”

Tragedy can often contain seeds of help and resilience, especially among children. And that energy inspires the volunteers, many of whom find their roles as rewarding as the service they provide to families.

“There are so many needs in times of disasters, and this is a way that I feel like I can best use my gifts,” Remnant said. “My husband will go and do disaster-response rebuilding projects because he has carpentry skills, but I don’t have those skills, so this is a way I can be of assistance to people who need help.”