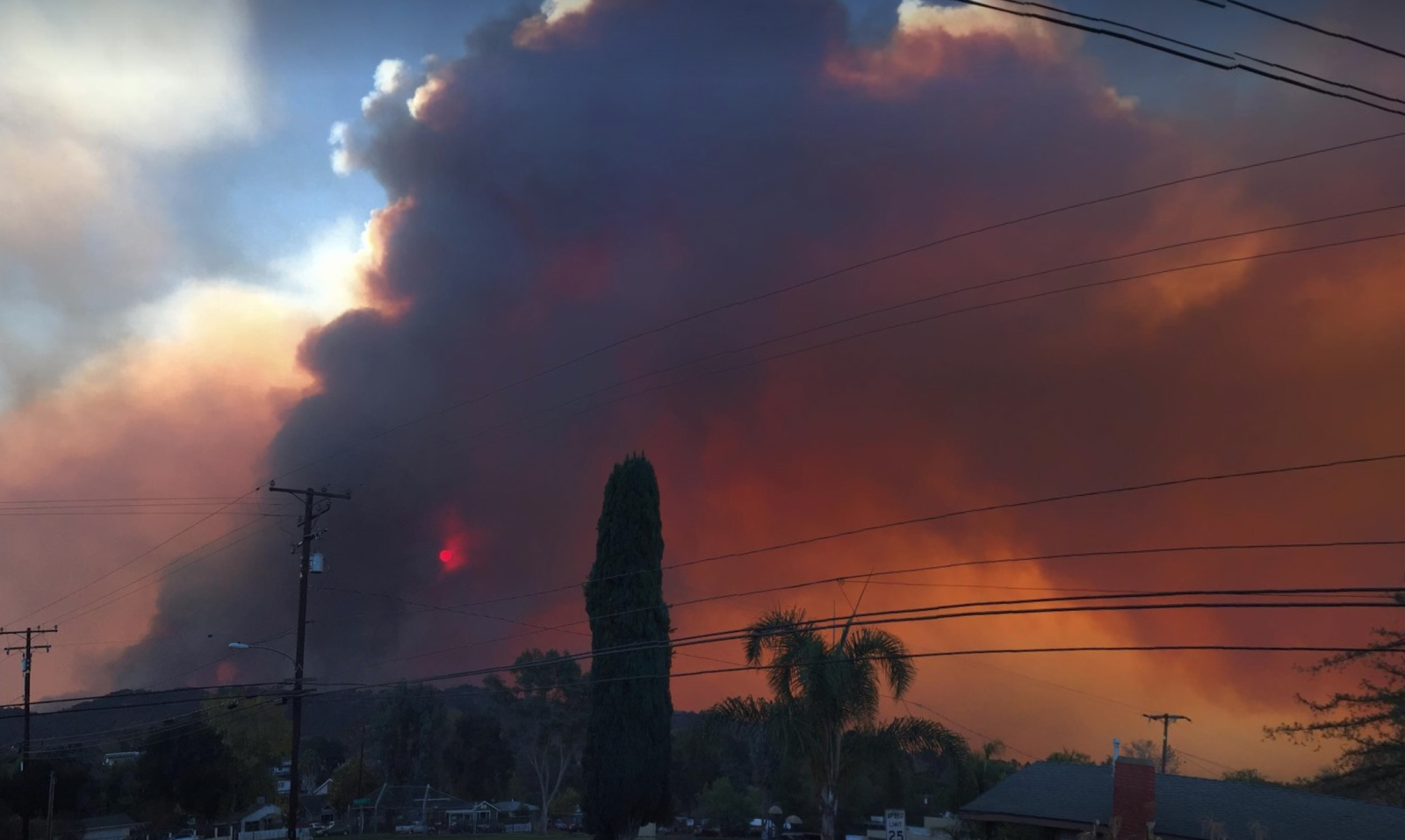 Photo of the Ojai Valley, California, during the Thomas Fire. Photo by Tim Nafziger. Tim Nafziger is a regular blogger for The Mennonite, Inc.

Community is key for us as Mennonites and this week that came home to me in a very concrete way as my wife, Charletta, and I watched the Thomas Fire grow from a glow on the horizon on Monday night into a raging inferno that entirely encircled the Ojai valley where we live.

The Ojai Valley in California is shaped by the Ventura River and its tributaries into a crescent moon. The name Ojai itself means “moon” in the language of the first peoples here, the Chumash. The valley is bordered by three main mountain ranges. Sulfur Mountain forms the inside curve of the moon to the south and east. This is where the fire first started on Monday night. Nordhoff ridge, with its iconic Topa Topa peak, forms the north edge of the valley. This range caught fire overnight on Wednesday, the scariest night for the valley as a whole. The Santa Ynez range is directly to our west and runs towards Santa Barbara. This range is still on fire, though the part of the range facing the valley has mostly burned out. Charletta and I live in Oak View, a small town in the southern part of the crescent.

We first saw the glow of the fire on Monday night far off in the distance beyond the ridge of Sulfur Mountain. At the time it was a curiosity with the full moon rising alongside it. An hour or two later we found a Facebook live feed from one of the local television stations which was covering the fire as it threatened Santa Paula and sped towards Ventura, driven by Santa Ana Winds blowing out of the Mojave desert far to our north. Later that evening we began getting texts from friends in Ventura who were evacuating their homes as they watched flames above them on the hills.

Social media and texts would continue to play a vital role for us through the week as we coordinated a place for us to stay and found information from trusted sources, often based on relationships.

In the wee hours of Tuesday morning, our landlords, who live next door to us, also made the decision to evacuate. This prompted us to begin the fraught calculus that so many have done leaving homes they aren’t sure they will return to. The bulkiest items for us were half a dozen musical instruments, plus a few heirloom quilts and our work gadgets. We crammed these into our car and headed for a friend’s house nearby to check in with them. They were more reassuring about the safety of the neighborhood overnight and so we spent the night there.

When we woke up in the morning, the fire had moved much closer to the east side of the valley. We could barely see the sun glowing red through the vast smoke cloud stretching across the sky (see photo above).

By late morning we could see the flames coming across Sulfur Mountain. These hills are ranch areas and wild areas with a mix of fire-friendly vegetation known as Chaparral. The smoke in Oak View was also beginning to get bad. After helping our friends pack some family heirlooms, we decided it was time to leave ourselves. However, the valley has limited exits and two of them were already shut down by the fire.

Charletta and I decided to go to the local evacuation center in the valley to consider our options. As we passed the long line of cars waiting to exit the valley on one of the two remaining ways out, we felt the panic rising: did we really want to risk being at the back of that line, stopped in traffic, if the fire evacuation became mandatory? We later learned that some of our friends had faced that very situation the night before in Ventura as they watched flames racing over the ridge above their heads while sitting  in stopped traffic. We were reassured when we arrived at the shelter to find Red Cross volunteers calmly signing people in to receive food and a cot for the night.

In our work over the years with Christian Peacemaker Teams, we have worked with people who have been displaced from their homes, those trying to return home and those resisting pressure to displace in conflict areas. This was our first time experiencing the uncertainty and anxiety ourselves. Signing in with the Red Cross brought that home.

We spent a few hours at the shelter, visiting with friends who were also escaping the smoke in Oak View. We felt that strong Mennonite drive to be useful, but the Red Cross only allowed pre-registered volunteers to do official volunteer work. Charletta managed to talk her way into a job alphabetizing 200 intake forms and then multi-tasked doing that while de-escalating a conflict between a fraught mother and an overly helpful stranger. But even amongst the Red Cross volunteers, there was uncertainty about what would happen if the shelter had to evacuate everyone. Privately they told us that if we had the means to leave the valley and stay with friends, that was our best option. So when we heard that Highway 33, the main road south to Ventura, had reopened, we got back into our car and headed south.

As we drove out the mouth of the Ojai Valley on 33, we could see very clearly where the fire had jumped the road and was now burning on the west side of the road and headed out for more wild Chaparral. You can see Charletta’s timelapses of our exit from the valley here. She also communicated with a friend who had offered us a place to stay earlier in the day. That evening, out of reach of the fire, I finally realized how much stress I had been carrying over the last 24 hours and started to release it.

But the uncertainty was not over. Three mornings out of past six days, I have woken up in the morning wondering whether our home stood as the fire has worked its way around the valley. On Wednesday, I went back to the valley with a colleague from the Ojai Valley Green Coalition and visited some of the areas in Upper Ojai (the valley east of the main Ojai Valley) where the fire had already burned through. With a cruel randomness, the fire had destroyed some homes and left others standing. You can see photos from that trip here.

Throughout the week, the dilemma we felt in the evacuation shelter came back to us: is now a time to help others or to accept help as displaced people ourselves? Our lodging with four different friends over six nights has been the biggest gift to us that we have accepted with grace and humility. Accepting help in a crisis can be hard, but is as important as being able to give. Thanks to Ched, Elaine, Anna, Derek, Josephine and Donna for your wonderful hospitality!

There have also been justice issues that have come up and our relationships with organizers and social justice activists here have been important. On Thursday we joined local organizers to hand out masks to farm workers whose bosses did not provide them, despite poor air quality. We also let them know about their rights. Some supervisors did not allow our friends and colleagues into the fields to hand the masks out. The inequality between big agriculture corporations and the farmworkers who pick their produce was as stark as ever. Our local paper, The Ventura County Star, covered the work of some of our friends to highlight this. It took Ventura County three days to begin providing Spanish language translations of vital emergency evacuation information and it took significant work to make that happen*.

As of this writing, the fire threat to those of in the Ojai Valley and Ventura has diminished, but the fire continues to burn and is headed for coastal communities to our west from Carpinteria to Santa Barbara. The smoke will continue to be an issue for the next week or more.

Community is a central part of what Mennonites value. This week taught me a lot about the concrete, earthy and practical role that community plays in a crisis. We drew heavily on our social networks throughout the week, from arranging a place to stay on a few hours notice to asking Facebook friends across the country to support the local environmental organization I am directing. As our planet faces deep ecological crisis, local climate-related disasters like this will become more frequent and extreme. The best I can say is that I will carry the lessons of resilience and relationship from this week with me for the rest of my life. May we all learn when to give and when to receive.

*Dec 11 Note: Genevieve Flores-Haro, associate director of Mixteco/Indígena Community Organizing Project (MICOP), sent me this clarification: “I might add that the [Ventura] county page is still not in Spanish. It merely points users to a google translate option that was always there and that provides a terrible translation. Most municipalities are also not providing information in Spanish either (though my hats off to City of Oxnard for doing some info in Spanish.) We’re still pushing and working towards it!”