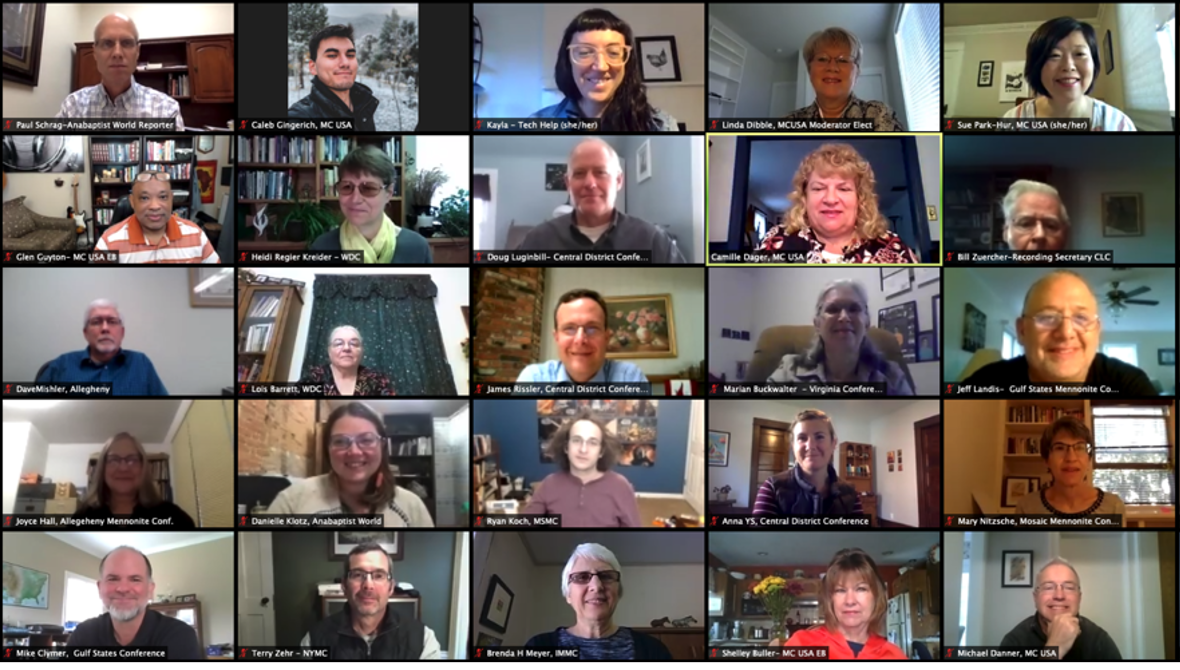 During an Oct. 16-17 videoconference, 80% of Mennonite Church USA Constituency Leaders Council members agreed that the Executive Board should ask delegates to retire the Membership Guidelines.

The 20-year-old guidelines cite the denomination’s Confession of Faith, which defines marriage between a man and a woman, and say pastors may not perform same-sex marriages.

Some area conferences do not enforce the guidelines, creating a discrepancy between policy and practice.

An advisory group has recommended the guidelines be retired.

In small-group discussion, most CLC members affirmed that retiring the guidelines would move the denomination forward. They voiced concerns about possible disruptions, losses and realignments, but also optimism.

Terry Zehr, conference minister of New York Mennonite Conference, reported that in his discussion group “some said retiring the Membership Guidelines would raise anxiety, while others expressed that this may allow us to focus on things we can celebrate together rather than spending energy focusing on our differences.”

Responding to a sample resolution, several groups said the following phrase was important: “We commit to the difficult work of being church together amid our differences, working at biblical justice and reconciliation where there is conflict.”

Clyde Kratz, executive conference minister of Virginia Mennonite Conference, on behalf of his discussion group, asked, “At what point do we, as a church, acknowledge that we exercised power and it harmed people?”

He continued: “In our conferences, retiring the Membership Guidelines will be extremely disappointing for many. Is there a way to recognize the awareness of harm, even though some would rather not go this direction?”

The resolutions Committee will meet Nov. 18 to review the draft resolution and the CLC’s input.

In January the Executive Board will make decisions on recommendations for the delegate assembly, scheduled for July in Cincinnati with both in- person and virtual programming.

Iris de León-Hartshorn, associate executive director, led the group through 90 minutes of training on power and race, focused on the various forms of power and how power is used to include voices, limit voices and exclude voices from decision-making.

Participants shared good news and lessons learned during this past year. Among the highlights: