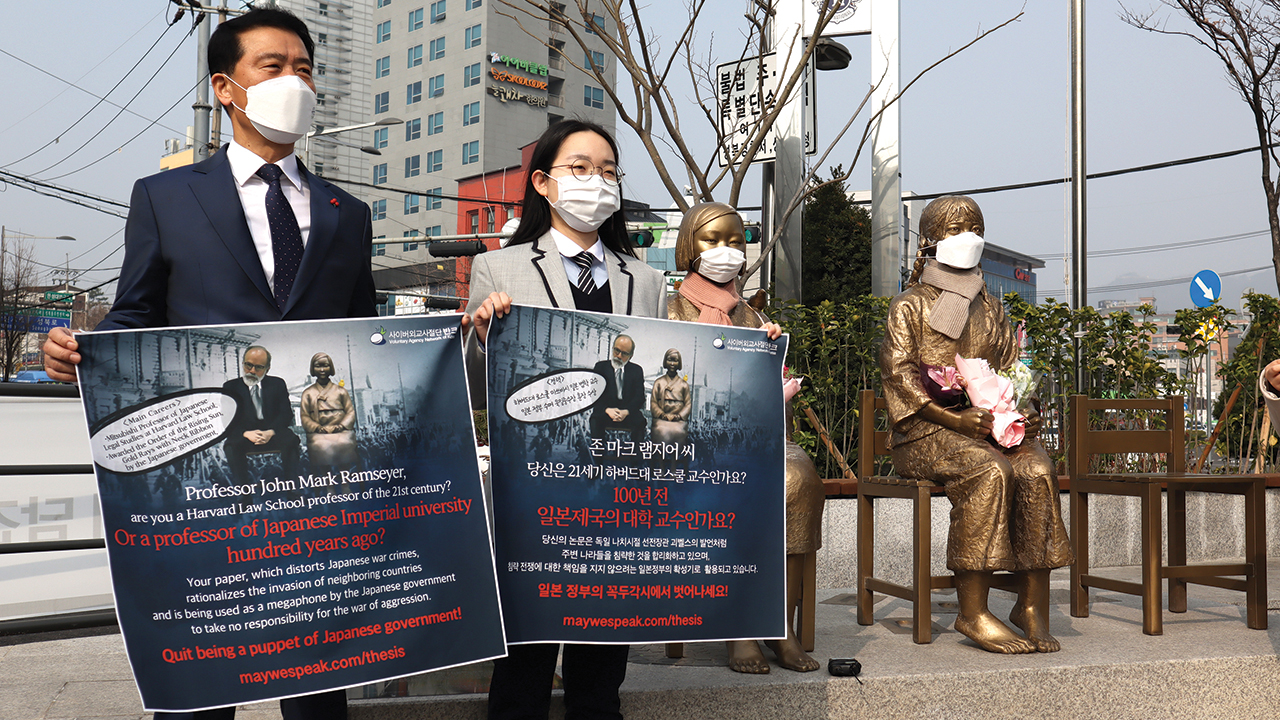 Members of Voluntary Agency Network of Korea, an online organization of young people who share about their nation with people in other countries, hold a demonstration criticizing Harvard University professor J. Mark Ramseyer on March 15 at the Statue of Peace in Seoul, South Korea. Similar statues of “comfort women” exist around the world. — Voluntary Agency Network of Korea

Mennonite Church South Korea has joined a chorus of criticism and has requested dialogue after a Mennonite scholar at Harvard University suggested Korean “comfort women” forced into sex slavery for the Japanese military during World War II did so willingly.

In “Contracting for Sex in the Pacific War,” published in December in the International Review of Law and Economics, J. Mark Ramseyer argues political disputes between South Korea and Japan have obscured the consensual “contractual dynamics” involved in wartime brothels.

Ramseyer also wrote in a Jan. 12 editorial in the conservative-nationalist Japan Forward that Korean “comfort women” chose prostitution and that claims of coercion are “pure fiction.”

Mennonite Church South Korea, or MCSK, responded with a statement citing a letter of concern signed by more than 3,600 researchers and activists around the world.

Amnesty International’s research with “comfort women” survivors has reported up to 200,000 women and girls were forced into sexual slavery by the Japanese military before and during World War II. They came not only from Korea, a colony of Imperial Japan at the time, but also from China, Taiwan, the Philippines, Malaysia, Indonesia, the Netherlands, East Timor, Japan, Vietnam, Thailand and Myanmar.

Writing on behalf of MCSK in an April 6 statement, general secretary Yongha Bae said Korean Mennonites disregarded Ramseyer initially but ­“became deeply troubled when we learned that the author of this ill-­informed and ill-intentioned paper is a fellow member of the Mennonite church, and the son of prominent Mennonite witnesses.”

The statement said Korean Mennonites “are experiencing feelings of serious pain, outrage and confusion over what an American Mennonite brother has done.”

Ramseyer is Mitsubishi professor of Japanese legal studies at Harvard. He is the son of Robert and Alice Ruth Ramseyer, who worked as missionaries from 1954 to 1972 in Japan with the General Conference Mennonite Church and returned in 1978 and 1987. Robert Ramseyer later worked for a decade at what was then Associated Mennonite Biblical Seminary in Elkhart, Ind., and founded the Overseas Mission Training Center there.

South Korean Mennonite peace work includes connections with Japan and China. Since the Ramseyers helped to lay the foundation for the Mennonite church in Japan, their son’s article has elicited a strong response in South Korea, where coverage of the article was featured on television and made front-page news.

“We have learned that his understanding of Japanese colonial history seems to be very different from the views shared by the rest of Asia,” stated MCSK. “. . . We conjecture that his experience growing up in Japan helped shape his views on history, and the fact that he grew up in a Mennonite home makes us question the possible role Mennonites may have played in that experience.”

Ramseyer responded on April 7 to Anabaptist World’s request for comment about the statement.

“My article has obviously generated controversy, and an enormous number of attacks — most of which seem to be politically motivated,” he wrote by email. “The many attacks are false, and I will be posting a long discussion explaining how and why they are false in due course.

“My article is a historical article, in a specialty journal, about what happened on the Korean peninsula in the 1930s. My article is controversial. I understand that some members of the church do not like the conclusion that I reach.

“For the Mennonite Church at large, the question is this: Does it want to start trying to influence the conclusions professors reach in their scholarship? For those of us who teach at universities, the question is this: Do we really want to have anything to do with a church that claimed the right to try to influence the conclusions we can reach in our scholarship?”

The council of Mennonite Congregation of Boston informed MCSK on April 13 it had only recently become aware of Ramseyer’s article and was gathering information.

“We unequivocally denounce all publications or speech that is intended to create enmity and division,” García wrote April 9. “We also call on all individuals and churches who are part of the MWC family to repentance for the sins of nationalism, tribalism and racism deeply embedded in our attitudes and actions.

“I profoundly regret the pain this has caused the people of Korea and the negative perceptions that Prof. Ramseyer’s publications might foster about Mennonites. His work does not represent Mennonite World Conference’s views or the theological convictions of the Anabaptist-Mennonite tradition.”

Mennonite Church USA has no plans for a public statement, other than expressing support for both MCSK and the Boston congregation.

The Korean Association of Harvard Law School criticized Ramseyer for a lack of sufficient evidence showing the women were willing and able to negotiate wages. The association pointed to an almost total absence of Korean perspectives or scholarship in his research and claimed he also overlooked scholarship by the United Nations and Amnesty International. His article goes into great detail about Japanese prostitutes’ contracts, but Harvard Law School professor Jeannie Suk Gersen wrote in The New Yorker that he cited no hard copies of similar Korean contracts and told her, “I don’t have any Korean contracts.”

“He also makes multiple assertions that the comfort women story is ‘pure fiction,’ a revisionist claim that is recycled time and time again by neonationalist figures,” stated the Korean Association of Harvard Law School. “. . . Decades’ worth of Korean scholarship, primary sources and third-party reports challenge this characterization. None are mentioned, cited or considered in his arguments.”

Another critic of Ramseyer is SeongHan Kim, a representative for Mennonite Central Committee Northeast Asia based in Chuncheon, South Korea, who attends Jesus Heart Mennonite Church. In an open letter to Ramseyer, Kim said he felt hurt to read Ramseyer’s claim that comfort women volunteered and that stories about sex slaves are fiction. He cited the experience of his aunt, who was forced to marry at age 16 to avoid national mobilization for labor and suffered for it.

“The article is hurting people committed to making peace and reconciliation in Northeast Asia,” Kim wrote. “I want to invite Ramseyer to join a pilgrimage with other Christian sisters and brothers in Northeast Asia. We may learn from each other. When we walk together into the most difficult place, we will see differently and hear differently.”