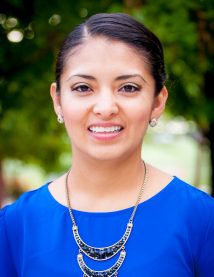 Name: Isabel Castillo
Role: Shenandoah Valley Organizer with Virginia Organizing, Castillo also was recently honored as a “Movement Honoree” by Sojourners and was a speaker at the 2013 Mennonite Church USA Convention in Phoenix

1. You came to the United States from Mexico when you were six. Would you be willing to say more about your own family’s immigration story?

My dad came here first under a guest worker program and then my mom and my siblings and I reunited with him later, here in the Shenandoah Valley in Virginia.

It was really hard for my dad to find good work and to put food on the table. That’s the main reason why they immigrated here. My parents worked in the poultry plants for many years. They would always tell us, “You don’t want to have to do this type of work.” They instilled in us a drive to get an education and to do well in school; to become a professional.

I did start sharing my story in high school, but it was mostly sharing it with some teachers that I trusted. One of my teachers took me to visit our local congressman to see if there was anything that he could do. He took me to Representative Bob Goodlatte’s office and he was chairman of the House Judiciary Committee and very against immigration reform. As I learned more, I realized, Wow, that was kind of risky.

In high school, my guidance counselor didn’t really know how to help me. I don’t think he had ever worked with anyone in my situation. I remember going through binders of scholarships and realizing that most of them required a Social Security number and my counselor didn’t have a list of schools or university that would accept me. So I graduated from high school, worked for a year in a restaurant and then I found out that Eastern Mennonite University (EMU) would accept students regardless of their immigration status. I graduated in 3.5 years with a social work degree.

After graduation, I was in the same place as I was at the end of high school. I wondered, “What do I do now? I have this college degree that I want to use and I want to contribute to my local community, but I can’t.”. So I thought to myself, I have two options: One, I wait for our immigration laws to change or a miracle to happen or two, I can be the change that I want to see in the world.

And I took option two. I needed to do something and stepped into this whole activist role. I had heard about the DREAM Act. I started signing petitions and signing up for everything and anything that had to do with the DREAM Act. I submitted my story to an online group called DREAMActivists.org. They were inviting people to share their story of being undocumented. I got an e-mail from somebody a few months after I submitted that saying that they were going to have a conference in [Washington] D.C. I attended and I met other undocumented youth who were organizing and being involved. They encouraged me to do something in Virginia and that’s when I really started getting involved. I started a small community group in Harrisonburg to raise awareness about the plight of undocumented youth and educate our community about what the DREAM Act was and still is [DREAM Act legislation has been before Congress for 16 years].

3. You have both an undergraduate and a Master’s degree from EMU. How did your time at EMU shape the work that you felt called to?

Well I think any time you’re in college or university, you’re opening your world and opening your doors and opportunities. One small way that comes to mind is that I took a speech class. I remember doing a presentation on the DREAM Act at the time.

College just helps so that you are better prepared and educated. As a social work major, I learned about the history of different movements. A lot of our work is not new. We’re following in the footsteps of other Civil Rights movements. I think immigration justice work is a Civil Rights movement. I remember doing research on Cesar Chavez and the farmworkers movement in California. Our work grows out of that work, too.

4. What has the Deferred Action for Childhood Arrivals (DACA) program meant for you and for many of the folks who you advocate with?

It’s been a game changer. I was able to obtain a better job, a job that fits with what I studied and my chosen profession. I was able to get health insurance for the first time ever. I got a credit card for the first time, so that I was able to start establishing my credit history. I actually had a Virginia driver’s license before DACA, because Virginia used to issue driver’s licenses to anyone regardless of status, but of course that changed after the events of September 11.

That driver’s license was everything to me before DACA, because I knew that I could drive without being scared. There are also lots of places that ask for a state ID, like stores when you are returning something or when you need to buy a medication stored behind the counter. So that driver’s license really helped me.

For many of the people that I work with, DACA meant that they could pay in-state tuition for college. We don’t qualify for federal or state aid, but in-state versus out of state tuition makes a big difference. And for many, the driver’s license is a big thing. It allows them to drive without fear.

We had a meeting on Tuesday to provide some safe space for people to process what happened [on Tuesday, Attorney Jeff Sessions announced that the DACA program would be terminated in six months, although no new applications will be processed and all renewals must be submitted by Oct. 5]. People shared many things. Many said, “I’ve worked so hard for all of this and now for people to take it away is awful. I remember before DACA having to drive in fear all the time.” So DACA really means so much.

5. You continue to do community organizing and advocacy work with Virginia Organizing. How does your faith impact your commitment to work for immigration justice and protection for DREAMers?

Recently I said that Jesus hung out with the marginalized and I think that the work that I do and the work that Virginia Organizing does is just what Jesus did. Unfortunately, so many of our communities are marginalize and oppressed. We try to empower them to take action and to find that power within them.

Specifically with the undocumented immigrant community, it’s a reminder that we have agency, dignity and power. This work is encouraging people to use that and find that.

DACA being rescinded is tragic and it’s disheartening and it’s infuriating, but I try not to lose hope. The silver lining that I try to find is that maybe now we will have a more permanent solution. We always knew that DACA was not a permanent solution. There was no pathway to a Green Card or to citizenship. My faith keeps me grounded. There is a saying in Spanish that God squeezes you, but doesn’t kill you. We might be getting squeezed a little bit, but I don’t think God will abandon us. I hope something positive will come out of this.

6. How does the decision to end DACA change the work that you have been doing? What is the new call to action that you would offer?

For our allies, it’s to use your privilege and really step up to the plate and take action. The most obvious thing that we can do in our political system is to call your senators, write to them and lobby. At the same time, there’s 2,700 people in Virginia alone that have to renew DACA in less than one month. For many, they don’t have that $500 that it takes to renew. You could consider sponsoring somebody’s DACA renewal fee so that they can have that protection for at least two more years.

It’s also still doing what we have been doing. Informing people about their rights through workshops and providing legal support. Here in the [Shenandoah] Valley we don’t have many immigration attorneys willing to do pro bono work. Is there a way we can screen some of these DACA folks for other options to see if they are eligible for new visas or asylum? If a community wants to raise money, perhaps a local nonprofit can hire an immigration attorney to help.

With the election that happened in 2016, we know that some people are like, “I can’t believe Uncle Joe voted for Trump.” It’s really about educating your own friends, family and relatives about what the DREAM Act and immigration reform really means. It’s not amnesty. If you really understand the DREAM Act, you know that it can be up to 15 years before you can even become a citizen. It’s a long process. There’s a lot of education that we can do to help people understand.

Mental health support is another big one. A lot of these youth are depressed and have so much uncertainty. They wonder: What’s going to happen?  I’m not going to be able to finish college, why even try? That’s a big thing. Back in 2010, Joaquin Luna from Texas committed suicide because he thought the DREAM Act wasn’t going to pass. He was worried that he couldn’t be an engineer and help his family move out of poverty. So providing mental health support is another way that people can help.

And not only do we have to fight for the DREAM Act, but we can’t forget the other 8 million undocumented immigrants that don’t qualify for the DREAM Act. They, too, deserve a pathway to legalization!

7. What does a typical day look like for you in your work with Virginia Organizing?

It’s not like a nine-to-five job where you go to your office each day. It varies. A lot of my work is just going out to the community, meeting people and hearing about them: what are their concerns, what things would they like to see changed? It’s going to other organization’s meetings and giving presentations sometimes. And of course there’s the administrative work: reporting, emails and calls. Some days we could be preparing for a rally or a march or a protest. So yeah, it varies.