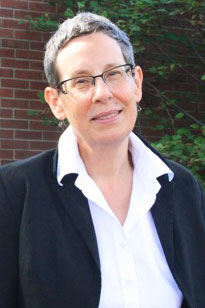 In an effort to highlight the many Anabaptists engaged in important work and ministry across the country and around the world, we’re starting a new series. Most Thursdays, we’ll publish a seven question interview with a different Anabaptist talking about their life, work, spiritual journey, etc. You can view past interviews here.

1. What are your earliest memories of the Bible?

I share this episode from my journey with Scripture every year in my first class.

My earliest memory of the Bible was a children’s Bible in my doctor’s office. Dr. Moriarty was an Orthodox Catholic, so there were lots of pieces of Christian literature in the waiting room. I remember one large illustrated children’s Bible and every time I arrived at his office, I would open it to a picture of Noah’s flood. It was a picture of the ark after the waters had subsided. The whole landscape was filled with white rotting corpses.

It’s not a morbid or onerous thing. It’s as hopeful as the rainbow image. You have to live towards that promise so that this not all for naught. We have to make life meaningful so that their lives and God’s promise have not been in vain.

2. Who were your mentors in the church or the academy that shaped the way that you think about faith, the Bible, and teaching?

Mrs. Muir was my Sunday school teacher for many years. She was a person who struggled with depression and who entertained lots of questions, but she also had a very solid grounding in Scripture and church community. She was a very loving, hospitable person. Early on she provided a model of what a Christian was. She was someone who didn’t have it all figured out but was tenacious despite the obstacles she faced.

Lots of people along the way have encouraged me. The year after high school I went to Naramata, a United Church of Canada retreat center where I met two people who gave me courage to pursue my calling, Roy Wood and Gary Paterson (who served as moderator of the United Church of Canada from 2012-15). They encouraged me to see myself pursuing a theological education or a pastoral education in the same way that a man would at a time when there really weren’t many female role models.

3. You’ve been especially interested in the biblical book of John. What is it about this particular book that intrigues you?

It was a bit of an accident. I had no interest in the Gospel of John when I was in graduate school. I was seven months pregnant when I did my comprehensive exams. I opened up the exam questions and the first one was on the Gospel of John and I started to cry. But don’t worry, I rallied.

When I started teaching I was given the course on the Gospel of John at Canadian Mennonite Bible College (now Canadian Mennonite University). The first time I taught it in a very traditional way. It was boring and dry.  The next year I adopted a literary-critical approach. That’s how my interest in it took off.

My favorite part is curiously one without Jesus’ presence. Jesus is unambiguously the protagonist of the gospels. He dominates almost every scene. In John 9, Jesus exits and the blind man’s narrative takes over with a series of interrogation scenes of the blind man.  I love the fact that he provides this model of faith where again he is somebody who doesn’t have all the answers, but he knows that what he’s found is good and he’s not going to let anybody, no matter how powerful, persuade him that the joy he experiences should be in any way diminished by their desire to find evil.

4. How did you first know that you wanted to teach?

I always liked the idea of teaching and pretended to teach as a child. I never felt like I was called to a preaching role.

I always thought about my ministry as being a teaching ministry. When I was young in the United  Church of Canada, I was dismayed that theological education really stopped somewhere in junior high. I had my time at the retreat center where adults would come and have discussions about theology and church, but that was the limit of it. I thought then that I would spend my work life promoting adult Sunday school programs.

When I joined the Mennonite Church, I thought, here’s a tradition that has this already. What one is training students to do is to participate in the congregation. We’re helping people learn how to really read Scripture well and how to have theological conversations and discussions that aren’t just about, “I have the right doctrine and you have the wrong doctrine.” We are teaching to promote healthy discourse in the church.

5. How did you join the Mennonite church? What drew you to this particular faith tradition?

It was an accident. When I went to graduate school, I met a couple in the program who were Mennonites. I socialized a bit with them and they encouraged me to try the Mennonite church, but I went to a Presbyterian church where all the other grad students were going because the preacher was so good.

During that time I met John Martens who had grown up Mennonite Brethren. We married and we decided that we would try the one Mennonite church in Hamilton one week and the United Church the next week. But you walk into a Mennonite church and they put you on a committee and you can’t get out. I was overwhelmed with how welcoming the congregation was. I found a home with the Mennonites.

6. How would you describe your pedagogical style?

I’m fundamentally concerned about helping people find ways of asking their questions and then finding answers to those questions. It’s not as obvious as people think it is. People often will have questions, but the way someone articulate a question may not be the real question he or she has. It takes awhile to come to true questions. Often finding good answers is not a straightforward affair. That’s what I think I’m doing.

I am fond on an image from Gotthold Lessing in which God holds out all truth concealed in his right hand and in his left the quest for the truth. Lessing chooses the left hand. I’ve always liked Lessing’s choice. I’d rather know what the good questions to ask are, because they tend to be ongoing, open, never-get-answered questions. There’s a burning desire to pursue them, rather than feeling like, Ok, that’s the truth and now I can stop thinking.

Working with 18-22 year olds makes one hopeful about the future. I feel a great sense of culpability for my generation leaving the world a bigger mess than we found it. I’m so startled that this is what’s happened. It went by so quickly. How did it get so out of hand?

I feel a strong sense of confidence in our students and what they are go out into the world to do. Right now I think there’s a real openness to doing things differently.

They are probably going to be doing church differently. We often make the mistake of thinking that the way we’ve been doing things is the right way or only way to do things. One of the things I love about studying the early church is realizing how very different it was. The assumptions that we make about church attendance or the Lord’s Supper or when and where it was done, all of that goes out the window and opens up the possibility for never-ending creativity about how we continue to maintain the legacy that Christ has left us.

Sometimes, when I feel cynical, I think that I’ve invested myself in a book [the Bible] that people don’t read as much as they used to, and in a church on this side of the Atlantic and Pacific and equator that is declining in membership. At the same time I trust in Christ’s promise, “I will be with you always to the end of the age.”

7. I hear that you’re a movie buff. What’s a film you would wholeheartedly recommend to others?

Eleni.  It’s a 1985 film about a reporter from New York assigned to the Greece office of his newspaper who has waited most of his life to revenge his mother’s death in the Greek Civil War.  At the moment that his opportunity arises to kill the man who shot his mother, he comes to realize that seeking vengeance is actually a betrayal of why his mother died for her children in the first place. It’s a powerful film that not many people seem to know.

Films I like are usually about reconciliation and redemption. I once wrote a film blog. Some of my favorite films would show up in that blog. For example, Joyeux Noël, a film about an unsanctioned truce that happened in Christmas 1914. Some Scots, Germans and French were in the trenches on a front line and, without having permission, laid down their weapons for the evening to be friends. It’s a great story. The opening sequence with the credits is brilliant.

I love the visual storytelling of films. This in part is why I’m interested in the Gospel of John. John does a lot of showing and not telling. I like to really watch films and pay attention to the construction of what you see on screen. It’s not just the actor and the lines, but it’s everything that’s in front of the camera that is contributing to your reception and ability to make sense of the story. Everyone thinks of watching film as very passive, but it only works because of the brilliance of film makers and their reliance on storytelling traditions in which we’re all steeped.