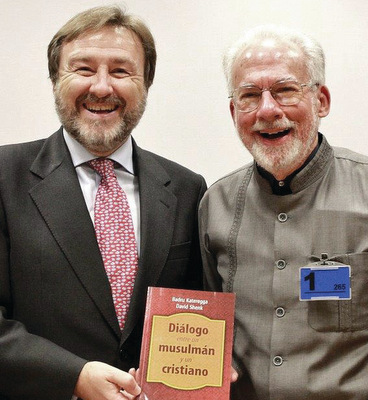 Javier Herrera, left, general director of government relations with faith communities in Spain’s Ministry of Justice, holds a copy of A Muslim and a Christian in Dialogue, with David W. Shenk. — Manuel Garcia/EMM

MADRID, Spain — The Spanish government’s Ministry of Justice has endorsed a book co-written by a Mennonite that presents a model of positive Christian-Muslim relations.

The Spanish-language version of A Muslim and a Christian in Dialogue by David W. Shenk and Badru D. Kataregga was launched Nov. 24 in Madrid by the Evangelical Alliance of Spain, after a seven-year wait.

The government’s Ministry of Justice sponsored the book’s official launch.

“As in many places around the world, there have been instances of both positive and negative interactions between the Christian — mainly Roman Catholic — and Muslim populations in Spain,” said Andres Prins, a member of Eastern Mennonite Mission’s Christian/Muslim Relations Team.

Prins, who first envisioned and proposed such an event, said the government’s interest in highlighting the book was an indication of the importance it places on promoting understanding and reconciliation between Spain’s growing evangelical Christian and Muslim communities.

Mariano Blazquez, general secretary of the Evangelical Alliance of Spain, called the book an unprecedented effort to build understanding and respect. He said its nonaggressive tone yet forthright confession of faith is a model for both communities.

The event was sponsored by the Ministry of Justice with the participation of the Evangelical Alliance of Spain and the Unión de Comunidades Islámicas de España. UCIDE secretary general Riay Tatary said that until he read the book he had never before understood the faith of evangelicals.

Shenk and his wife, Grace, were invited to the launch in recognition of his collaboration with Kataregga in writing the book.

Shenk observed that the book is mostly a confession of faith: Kateregga gives witness to his faith as a Sunni Muslim, and Shenk responds; Shenk shares his faith as an evangelical Anabaptist, and Kateregga responds.

Shenk said the book has been useful in creating trust and respect between Muslims and Christians in places such as Egypt, Indonesia and East Africa.

“This kind of collegial meeting of evangelicals Christians, Muslims and political leaders does not often happen,” Shenk said. “It was indeed a remarkable event that participants will want to build upon in their quest for greater understanding.”

A Muslim and a Christian in Dialogue was first published in East Africa in 1980. The book is now in about a dozen languages. It is the first of four books in the Christians Meeting Muslims Series published by Herald Press.

Each book can be summarized in a word: dialogue, witness, peacemaking and relationship. The four books are: