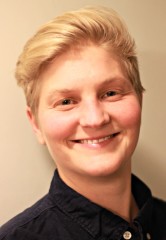 I sat behind them as the news was delivered to the congregation. I saw them cry—sob actually—and I felt my heart breaking. It was an odd reckoning that their pain was also my own, followed by immediate distancing—a splitting of self.

Fast forward to my junior year of college, where this internal split literally caused my body to shut down. I was not eating or sleeping. I dropped 15 pounds in two weeks and was having difficulty making simple decisions. I called my mom who brought me home from college and began therapy.

Survival shifted into revival as a graduate student at Smith College School for Social Work. Here the queer voice was a dominate narrative. This was a stark comparison to LBGTQ meetings in the basements of off campus houses at Goshen (Ind.) College.

At Smith, I became proud. I cut my hair short and felt attractive, rather than weird. I embraced myself.

However, there was something missing.

My amazing queer and queer allied community did not understand the part of me that was Mennonite.

As good as I felt about my gender and sexuality, I still felt somewhat fractured. Perhaps this is why I nearly burst into tears every time a queer identity is celebrated at First Mennonite Church of San Francisco.

There is an important distinction between tolerated and celebrated. I actually had no idea what celebration of queer identity felt like in a Mennonite context.

To be honest, it took me completely by surprise. The emotions that well up in having a pastor, who will unequivocally stand by my side, embrace my partner (even dance with us at weddings!) and marry us, if we ask, feels like a true gift. In actuality though, it is just what every other Mennonite heterosexual couple receives (except maybe the dancing).

The impetus for sharing my story is two-fold.

First, I want all LGBTQ Mennonite children to know that there is a way to happiness. If you feel fractured now, there are places and spaces where you can be whole.

My second message is to adults of Mennonite Church USA who are road blocks to LGBTQ membership and inclusion. The children are listening.

I remember all of the people from my childhood church who were strongly opposed to the lesbian couple becoming members. I remember them by name. I remember my extended family having debates on the issue and I remember who was “for” and who was “against.”

On some level, I was taking a tally on who was “for” and who was “against” me.

I thank God that I knew my parents were “for” or else I may not have made that desperate phone call to my mother in college.

Many, if not all of these adults in my early life have come around to acceptance and even celebration. I’m certain they had no idea they were hurting me. They likely thought that they were just having a heated and emotional discussion about a topic.

I guarantee that in each and every Mennonite church, there is an LBGTQ or gender variant child that is tuning into this current discussion and taking notes.

There is a child listening to how the Pink Menno voices were shut down, drowned out, even responded to with anger. They are listening to your debates and they are taking an internal tally of “for” or “against.”

At the risk of being polemical, there are children in Mennonite churches who have taken their own lives and you may have never known why. There are children who have ventured away from the church and developed addictions and other risky behaviors because the tally for “against” seemed too big a cross to bear. So long as their identities are prodded and questioned, there will be more.

The child and adolescent mind does not understand the grey area of continued discernment. It only understands “for” or “against.”

Finally, I do not and will not engage in debates about my legitimacy as a person or member in the larger church. This article is not an invitation into that type of dialogue. I am not mad anymore and I am not pleading. I am simply sharing my story on the hopes that hearing a perspective, different from your own, holds the possibility for deeper understanding.

If Mennonite Church USA does not even listen to LGBTQ voices, how can they truly understand? It reeks of similarities to white Southerners who say, “during segregation everyone got along.”

We are empathic beings.

When we notice the deep sting of oppression in another, we can acknowledge the ways in which we are all broken. We can own the ways we are hurting one another and make changes. Or, we can cast them away as an act of self-protection and avoidance of one’s own fracturing and prejudices.

Would the adults in my community made different decisions if they truly understood their impact on me, as a child? Would they have said different things?

Addie Liechty lives in Oakland, Calif., where she practices psychotherapy in private practice and at the Well Clinic. She is a 2006 graduate of Goshen College, where she studied Peace, Justice and Conflict Studies. She a member of First Mennonite Church of San Francisco, where she was baptized in 2011.