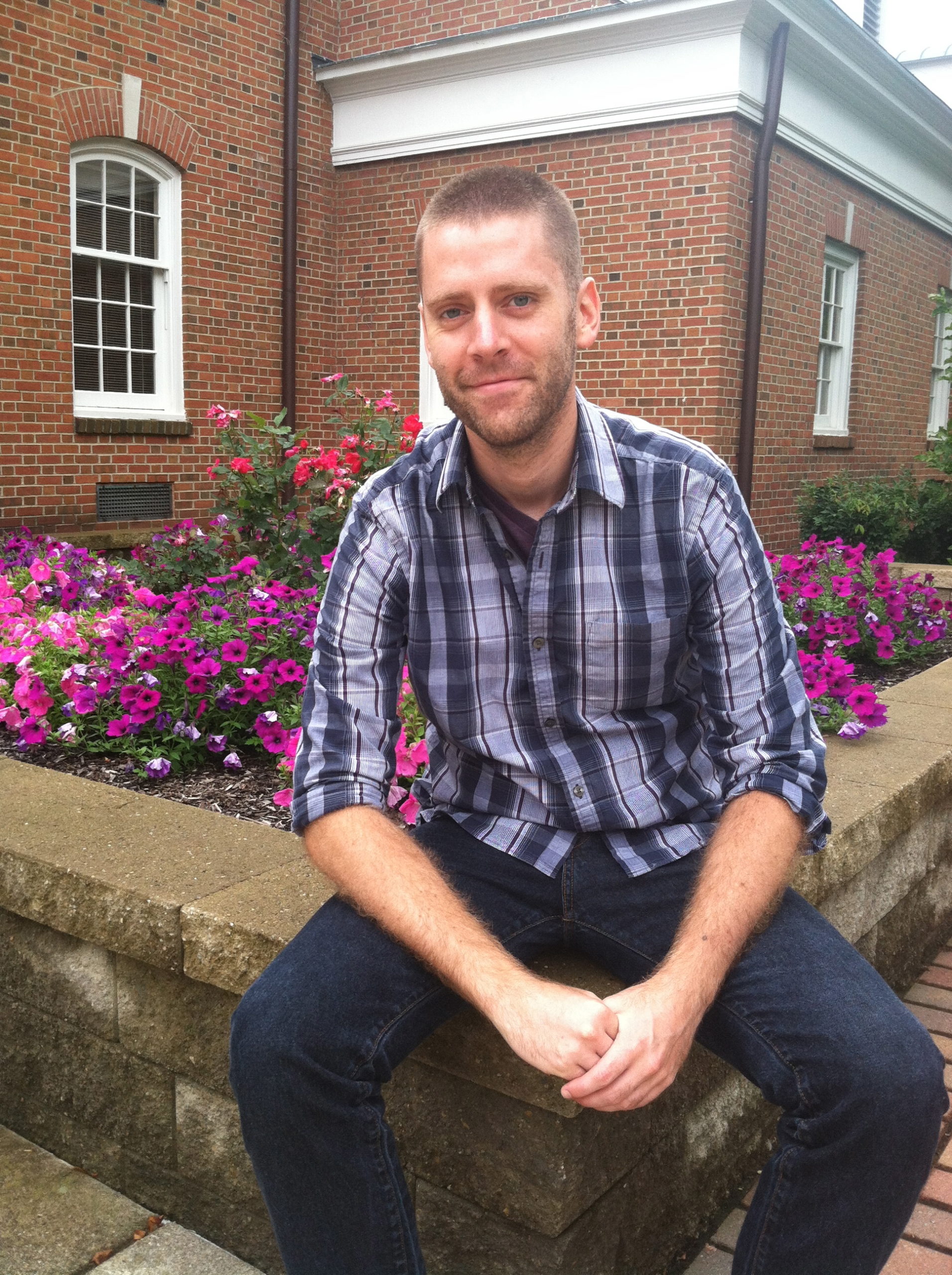 Mark Rupp is Pastor of Christian Formation at Columbus (Ohio) Mennonite Church. This piece was first preached as a sermon.

Michael Brown’s body lay in the street
Barely covered up; a thin white sheet-
-Of solace too late and too small to hide the feat
From the gathering crowd; already beat-
-Down by the white-hot mid-August Missouri heat,
Ferguson’s misery chronicled tweet after tweet after tweet
“I just saw someone die OMFG”

Four hours, there on Canfield Drive
A son, a nephew, a friend, alive-
-No more: fighting to survive
In a system not built for him to thrive

A country not built for him, but built by him
A people turned to fuel for an engine so grim
God’s blessing enshrined in American hymns
Whose shallow verses barely even skim
These deeply troubled waters where so many…

Sink
But wait! We think
Where’s the link?
People on the brink
Skin so…pink?
Not white! We shrink-
-Back from the stink
Of all that ink
Spilled to prove that…pink
Will always be at least two-fifths more
And that’s just the compromise

Now, no longer chains but boot straps
Tied so tight they leave no slack-
-to pull up on.
Feet tripping on the crack
The war on drugs paved in Black-
-communities cemented in the reality that one in three of their men
Will see the inside of a jail cell
Sadistic statistics making our feet pessimistic
One in three of their men will be haunted not just by those four walls
But by the four thin lines of a box
Their pasts making them modern day Goldilocks
Too…reformed(?) for prison, too dangerous for jobs
Finding very little in this house that’s juuuuust or right

But Obama! Some say,
As if the word itself is a foreign term
Roughly translating to mean:
Plausible deniability
Protecting white fragility
From the instability
Caused by the mobility
And disobedient civility
Questioning our credibility
Calling us to liability
Not accepting the lies of our ability
To break through futility
And…do the right thing.

But, personal responsibility! Some say.
Just do what you’re told, some say.
Michael Brown was a hulking demon, some say.
Trayvon’s Skittles and juice were ingredients for a drug cocktail, some say.
Sandra Bland was rude, some say.
Freddie Gray used drugs, some say.
Eric Garner should have been in better shape, some say.
Tamir and John shoulda known better than to play with toy guns, some say.
Dontre
Laquan
Tanisha
Walter
Jerame
Philip
Not just names but tally marks scratched on a prison wall,
Both marking the days and asking “How long, Lord?”
Black bodies put on trial for their own murders,
The indictment of their character wracking up against them
While they plead the fifth from underneath six feet of slanderous silence

Taking up that mantle to answer these charges, others shout and plead
Black Lives Matter!
But my attempts at rationalization, grasping for black and white, find only gray-matter
Slipping through my fingers quicker than a cable news ticker
That conveyor belt, piling up the facts we use to build our monuments to objectivity
Bricks in a wall that enable my comfortable passivity

Arm chair anti-racism always an adequate amount of distance
From anything that asks too much
Right before Ferguson erupted,
The officer asked Mike Brown to move to the side of the road.
Did he ask too much?

The shots heard on Canfield drive were not bullets but echoes
ECHOES, echoes, echoes-
-Of a history that refuses to die away slowly as it bounces off
The mountains of denial that always seem to block the sun
For some.
But the shadow no longer shackle or shame
No longer a mark of sin but a sign of salvation,
A sign of God on the side
Of all the roads where strange fruit grows.

The amount of time between a palm parade
And the midday shade-
-Of the cross. Jesus’ body displayed

Four days, a crowd so swayed
That a donkey motorcade
Becomes a beam on shoulder blades
So heavy he pleads for aid
To carry the burden of that guilt mislaid

These four days are the water in which we now wade.
Dying to know the things from which peace is made.

We begin on a road outside the city
Jesus just starting to form the Palm Sunday sub-committee.

“Just take it?” they ask before they are sent
Ahead for a donkey to make the descent
Not convinced the owner will give an assent

“Tell them it’s needed, for use by the Lord.”
“But Jesus,” they plead, yet their worries ignored.
“Just go. This will work.” As he pushes them toward-

– The city, where after all of that worry
He was right; the owner gave up in a hurry
The colt, unridden, unbridled, no spur he-

Had felt in his side.
Just like Zechariah prophesied

Not a horse, but an ass, a symbol of peace,
For generals, war heroes, kings, and police,
Ride horses to battle, force violence to…cease?

But Jesus approaches, a donkey his ride
A different approach, subversion implied
Refusing to simply be pushed to the side-

Of the road or the street by all of those who
See his message of peace as political coup
Political? Sure, but he and his crew

Don’t seek to take over, or kill for some clout
Hosanna! God’s peace! Are the things that they shout.
The kin-dom of heaven: a seed near to sprout.

But be sure, that this plant is a ravenous weed,
It’s flowers and blooms spreading out with such speed
Taking over with beauty the deeper it bleeds

Yet,
Not the blood but the struggle gives it such power
A dirt-stained theology refusing to cower
Dignity the root and justice the flower

For flowers can fade, lie dormant, or hide,
But the roots of God’s peace, are buried inside
The image of God will not be denied

For crosses nor bullets nor backs of right hands,
Can keep us from shouting or making our stands
When hatred, or fear, or injustice demands

That we move to the side, that we all quiet down
That disruption will not be allowed in this town
Stand together, hold hands, make sure no one drowns

In these troubled waters.

So let’s flip some tables, let’s march in the street
Let’s refute the system by washing the feet
Of our enemies, friends, whoever we meet.

And whether we’ve got four hours or days,
Let’s make sure our hearts and our feet stay ablaze
With conviction to move more than hearts with our praise

If we won’t, the cries of the stones will be raised.

The length of time we cram inside
A box that determines who will reside
In the White halls of power, a country decides.

Four years
And yet why should we care
For a kingdom, an empire, a home we don’t share
We belong to another, not this frigid nightmare

But wait, here we are, four years lie ahead
Not of this world, yet a road we must tread
Together

Together like family that we didn’t choose
Like holiday gatherings when talk of the news
Pulls attention away from that cousin,
you know, the one with all the tattoos.
Right on cue
The yelling ensues

Will our silence save us?
Don’t get me wrong, not all yelling is bad.
Yet when does our silence speak more than our words?
When are the sighs and rolling of eyes not enough?
When does our faith call us to disrupt?
To speak out, to get moving, to vote with our mouth and our feet
As well as our ballots.
To use every method both overt and discreet
Like Isaiah, maybe we should we walk nude through the street.
To make sure that our family is going to treat
Every person as though it is Christ that we meet.

Candidates whose
Intent is to cruise
to victory on rhetorical trump cards
Tipping their hands, we throw up our hands.
How can they win, when all they hold are jokers?

Jokers hiding daggers underneath their schticks.
Revealing that their bag of tricks
Is filled with bricks
Can this be what passes for politics

But politics has no place in the church.
I have heard time after time.
Time? Let’s consider:

What makes us as society tick?
Politics:
Is a committee of watchmakers with different ideas
Ticks versus tocks
Society is people telling time by that watch
Whose workings may or may not have been botched
By that congress of watchmakers peddling the time
While all along echoes of history chime
Out the notes the remind us that time marches on
Regardless of whether we’re right or we’re wrong

As the Church we must listen, to those who find
That the way we set watches has left them behind.
Those who say we’ve moved on too quickly
From wrongs that we simply
brushed to the side

For the biggest lie of our time is that racism only looks like men in white hoods
While more often than it should
It looks like white men that created ‘hoods
With lines drawn on maps and on hearts
Lines that continue to chart
Our separate courses
With forces unseen by White eyes
Merits disguised
By privilege unrecognized.

Through Jesus, the Word, the one who disrupted
With truth and with love all systems corrupted

So whether four hours, four days, or four years,
Let’s open our eyes, unstop our ears
Loosen our feet, and unclench our fist
In the face of injustice, let’s get really
Mad

Let black mother’s tears be an ocean
A storm, and a spark
Igniting a beacon to light up the dark
Of an arc that bends
Toward justice, they say.

But if I may, weigh in on this worn out cliche

The moral arc is a road, winding off toward the horizon
Where the sun sets behind the clouds of our unknowing
Does it bend or is it just that far off?
It isn’t gonna bend towards justice unless,
With the Son,
We all set our feet firmly on that road
The weight of our conviction bending it
Breaking it, pushing it,
Forging new paths, if need be.
Making sure we don’t let the myth of progress
Turn us into complacent spectators on the side of the road
Content to watch history unfold before us.

And so, my wish for us, my friends is:
• That our theologies would be covered in dust, with grass-stained knees as we make the road by walking.
• That we’d get out of our heads and into our feet, and our hands, and voices, taking responsibility for choices we make and the ones that were made for us.
• And finally, my hope is that we’d follow the one who invites us to work that is done not by spectators but by those who bravely step out from the side of the road.